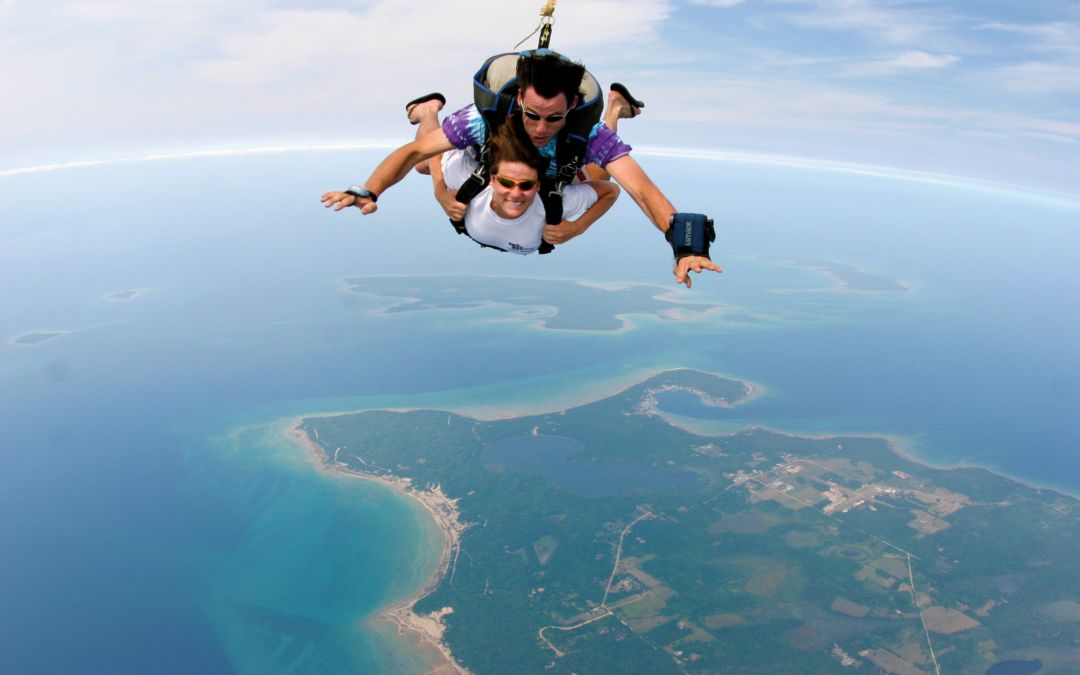 Traverse, Northern Michigan’s Magazine contributor Kate Bassett introduces us to the man who’s more afraid of a desk than of leaping out of a plane: Charlevoix native Luther Kurtz. From skydiving to law school, Kurtz—who owns and operates Skydive Harbor Springs—is living proof that maybe its the crazy people who aren’t the ones skydiving.  The following essay is featured in the March edition of Traverse, Northern Michigan’s Magazine.


The first time my daughter watched a pair of parachutes spin and swoop toward their designated landing—a nearby cornfield—she was stretched flat against warm summer grass, her fists clenching handfuls of well-rooted green blades.

“Wow,” she whispered in 2-year-old wonder, before laughing at the shrieks and “Wahoo’s!” floating down with the breeze.

Years later, the distinct hum of the Skydive Harbor Springs airplane (and the even more distinct silence that comes just before a jump) has become so commonplace that all five us—the whole family—will stop what we’re doing, cup our hands to block the sun, and look up when we hear it. We wait for the whoosh of a chute opening. We watch for a splash of color against blue skies or billowing clouds. We listen for screams and shouts (plus occasionally, swear words—but in a friendly, excited way—that make my kids raise their eyebrows and giggle). 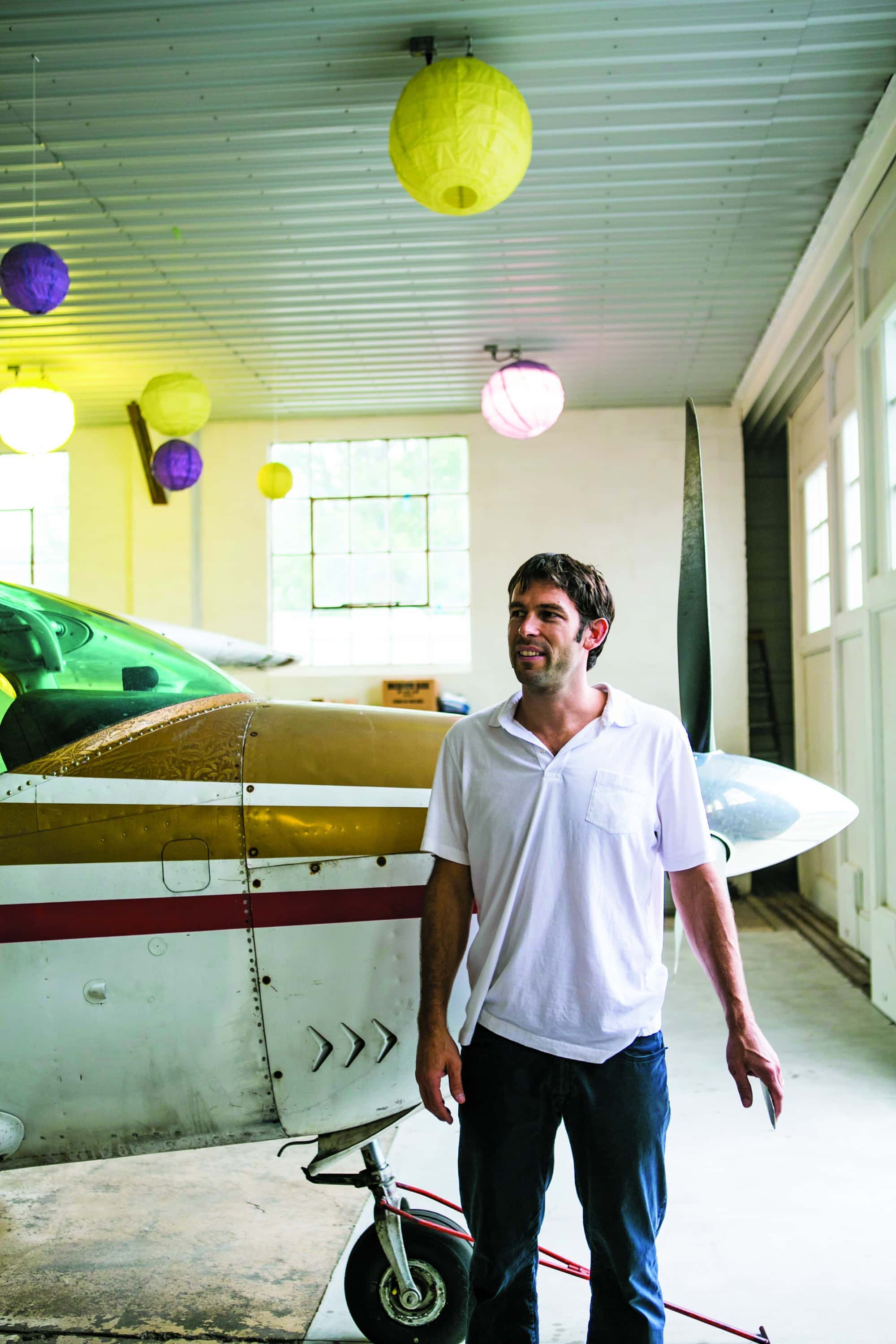 It’s fun to witness someone else’s insanity/adventurous spirit/fear-conquering. For those who live in our neck of the woods, it’s also a celebration of the guy who is often strapped to one of the jumpers we’re watching float to the earth.

←That guy is Luther Kurtz, owner of Skydive Harbor Springs—plus five other “drop zones” around the country. He’s a Charlevoix native whose list of accomplishments is long enough to stretch the two-miles he loves to fall.

In fact, it’s hard to talk about Kurtz without getting this out of the way: he holds a degree in aerospace engineering, a commercial pilot’s license, and a world record (with his sister, Angela Bishop) for most tandem jumps in 24 hours. He has an off-the-charts and still growing business, and bought and upgraded the movie theater in Charlevoix. Partnering with friend Brian Noirot, Kurtz owns and operates a 22-unit apartment building in Charlevoix, as well as the former Whitney’s building (it has been leased to his friend Eric Hodgson to reopen as the Quay Restaurant and Bistro). He started a free outdoor movie series in Harbor Springs, serves on the Top of Michigan Trails Council Board of Directors and the Charlevoix Downtown Development Authority. Oh, and he’s also a law student. 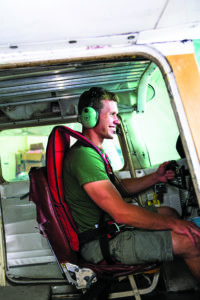 “A lot of people do tell me I should probably quit law school,” Kurtz says. He laughs a little. “I’m only going a semester at a time, but I’m two-thirds of the way through. I might as well finish.”

He pauses and adds, “Besides, I love the accomplishment of figuring something out, having a challenge like law school provides.”

It’s clear Kurtz, 36, never tires of challenges (or accomplishments). His breezy personality—as comfortable in a suit accepting entrepreneur awards as he is in shorts and a T-shirt on a Lake Michigan beach—is rooted in risk-taking. Or as Kurtz calls it, “big dreaming.”

“I first learned to skydive in Hastings, Michigan, 15 years ago, and ended up loving it enough to become an instructor in California, where I was going to college. I used skydiving as a way to help pay for school.”

Kurtz said he managed to talk the folks in Hastings into having a plane come to Northern Michigan for a summer. He started a skydive operation in Charlevoix, which he soon moved to the Harbor Springs Airport, located along M-119 between Harbor Springs and Petoskey.

“To be honest, I really didn’t think it would be very successful. I had no idea what I was doing,” Kurtz says, recalling a hot summer spent running around town with flyers, talking to strangers, anything he could think of to drum up interest in a 120-mile-per-hour, 60-second free fall from two miles up (with another seven-minute parachute ride spanning the last 5,000-feet to the ground). 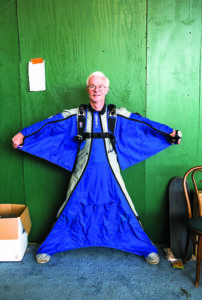 In addition to Harbor Springs (a location that also does a lot of jumps in Traverse City and Beaver Island), Kurtz now has jump sites in Fowlerville, Michigan; Miami, Florida; Washington, D.C.; Phoenix, Arizona; and Los Angeles, California.

“For a while I lived in a new location every year. I never stopped thinking of Northern Michigan as home though.”

Managing all six locations (and occasionally more “pop-up” locations) could have become a logistical nightmare, had Kurtz not created a call center system to handle scheduling jumps across the country from one central location.

“We actually started the call center in Miami,” Kurtz says. “Within six months we decided to move it to Northern Michigan.”

Committed to running his business from the Harbor Springs Airport, Kurtz redid an old airplane hanger. Inside, the second floor now houses 10 computer and phone stations that serve as the motherboard for drop zones.

“We’ve now started a new business—Bucket List Rides—managing other company’s drop zones as well. We currently have three clients that we are helping do a rebrand, and are beginning to branch out into flying lessons. My goal is to employ 50 people year round instead of 10. Aim big, right?” 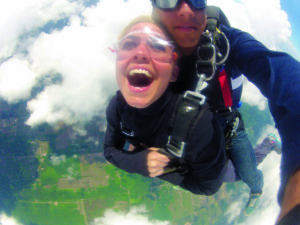 Right. Because when Kurtz aims big, he tends to succeed. Case in point? He and his sister Angela set their sights on the world record for most tandem jumps in a 24-hour period, just because the previous record holder had several planes, sponsors and a partially paid crew of 50.

“We thought it would be neat to beat the record coming from this tiny community, with a crew of 12 volunteers, including three pilots who flew nonstop for us. The Harbor Springs airport was very generous to support the idea, and the community itself was very generous to let us buzz overhead every eight minutes all night long.”

Kurtz’s sister was throwing up on the airplane for the first 60 jumps, “But in the end that might have been a good thing for our timing. Less need to go to the bathroom,” he says. The pair jumped 105 times in 24 hours. The result? A world record and great shot of publicity for Skydive Harbor Springs.

“I think people realized, Hey, if they can jump that many times in a 24-hour period, chances are they’ll be able to get me safely to the ground once,” Kurtz says.

Like any good leader, Kurtz is quick to pass off the success of this record to those who helped make it happen. It’s a trait he carries throughout his relationships here, happy to step away from the spotlight to let others shine. During the course of our interview, Kurtz continues to nudge the conversation toward organizations he’s passionate about, like the Top of Michigan Trails Council, instead of soaking up free press for his business pursuits.

“My dad was always really involved in the community when I was growing up. He still is, and that’s one of the reasons we used breaking the world record as a fundraiser for the Trails Council. I think in Northern Michigan in particular, if you aren’t paying attention it’s easy to miss how many great parts of our community exist only because a group of dedicated, passionate people come together and get things done.” 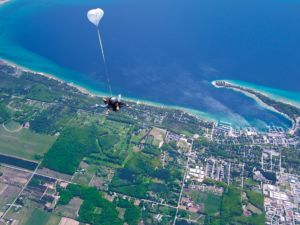 To that end, Kurtz sits on the Downtown Development Authority in Charlevoix, and he and his wife, Mary, started running a summer Movies in the Park series in downtown Harbor Springs “just for fun.”

“We love coming to town, getting dinner on Dudley’s Deck along the waterfront, and then setting up the movies, passing out popcorn to the kids. It’s a blast. We grew up in Charlevoix, and recently moved back there, but Harbor Springs still feels like our town as well. We are committed to this whole area.”

Being committed to Northern Michigan extends beyond skydives and volunteerism. The Kurtz’s bought the Charlevoix Three Cinema from the Charlevoix State Bank, which kept it going for two years so the community wouldn’t lose its movie house. Mary Kurtz runs the boutique theater, where black-tie employees still believe in holding doors open for patrons.

“We like movies,” Kurtz says, “but what we really like is the experience. It’s a lot like skydiving in the sense that when people watch a movie for the first time, they are right there, in the moment.”

I’m about to ask how a guy with a degree in aerospace engineering ends up owning a skydive business and movie theater, but Kurtz puts a hold on our conversation to greet his wife, who just walked in from serving at the twice-a-week free breakfast the Community Reformed Church in Charlevoix provides. He launches into a 15-minute pitch that would win over even the most hesitant meal-goers.

“It’s the coolest thing ever,” he says eagerly. “I thought it was only for, you know, people who really need a free breakfast, but the truth is, all kinds of people go. It’s about building community, and you aren’t allowed to pay even if you want to. It’s one of my favorite parts of the week now. You should come. Seriously.”

I promise I will, and slide the conversation back to how Kurtz found himself on this thrill ride of a path in life.

“Easy,” he says. “In school, you get to do all these exciting and challenging projects, but in the real world, it would be at least a decade of sitting behind a desk before getting to do the interesting stuff. So boring. I’m much happier jumping out of airplanes.”