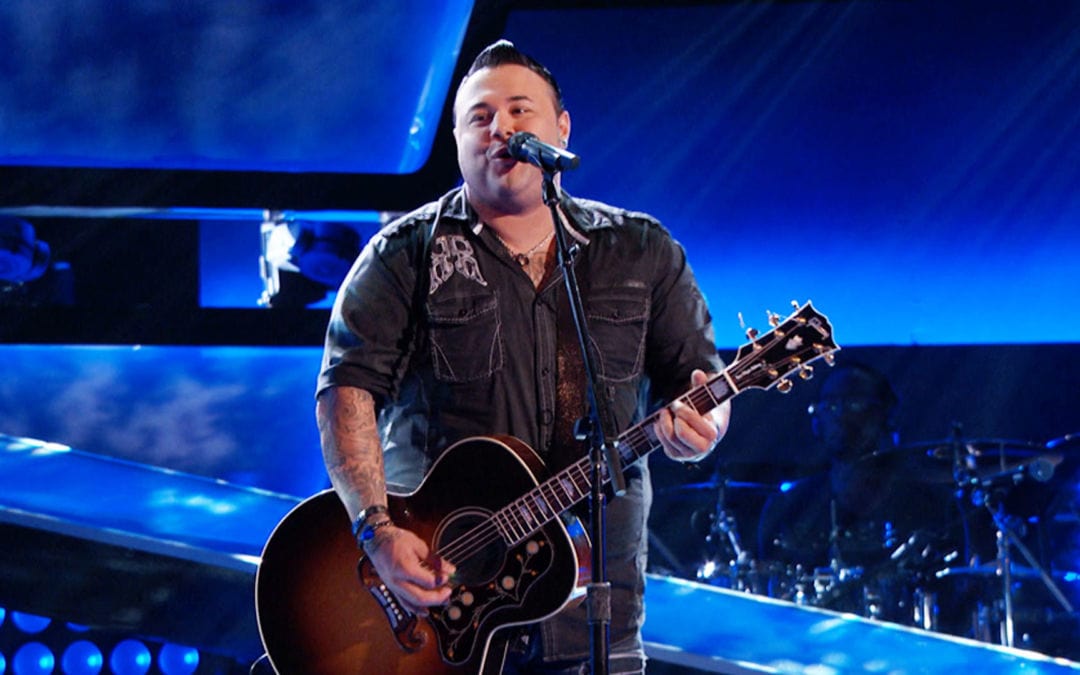 Traverse City native Ryan Whyte Maloney had heads and chairs spinning after singing just fifteen words of Journey’s “Lights” on NBC’s The Voice during his first televised appearance on the show.  Whyte, who now lives and performs in Las Vegas, managed to swing all four celebrity mentors during his blind audition, and will be moving on to the next round of the show; check back to MyNorth Music & Art for updates as the competition progresses.  MyNorth’s Evan Perry spoke with Maloney, who had a short break between rehersals at The Voice’s Los Angeles studio.

Describe what happened before you went on stage for your first audition.

I was waiting backstage, and there was a production assistant who took me aside and said, “Ryan, you’ve worked really hard to be here and you’re prepared.  You can turn four chairs.  I want you to turn four chairs.”  I was actually the second person to go during the blind auditions, so I was also the first person to turn all four chairs this season.

I wasn’t actually that nervous.  I’ve played over 360 gigs in the last year or so, and—even though it’s a big moment—I approached it no differently than when I’ve approached some of the national gigs I’ve done.  Even though there may be 20 million people who will eventually watch it, I was still playing to an audience, so I focused on performing for them—just like a normal show.

All four celebrity mentors turned their chairs, meaning you had the choice to pick which mentor’s team you’d join.  You seemed dead set on joining Blake Shelton’s team.

Before I had even thought about auditioning for the show—and I mean years ago—I’d watched the show and was instantly on Team Blake.  I’d been in a bunch of different rock bands when I was younger, but somewhere down the line I started to lean towards country music, and it was at that time that Blake’s career was just starting.  So I’m very familiar with Blake’s music and his career.

I’ve always imagined myself as an artist who belongs in the Nashville country scene.  The only problem is that Nashville is so over-saturated with radio-friendly country singers; I don’t have that kind of voice, but what sets me apart from the crowd is my power and range.  I think Blake will help me the most as a country singer.

I actually have two friends who have been on The Voice—one of them is a bit of a rival in the Las Vegas music scene—and neither of them got Blake to turn.  I made it my goal to get him to turn his chair, and it felt great to have him turn so early in the song.

Tell me about the song you auditioned with.  Certainly a bold choice.

Before the blind auditions, I sang “Lights” by Journey and a Rascal Flatts song for a preliminary audition.  I went with “Lights” for the blind audition because it speaks to an older generation.  Plus it’s challenging.  Obviously Journey’s singer Steve Perry is amazing, so it was a good song to show what I could do.  “Lights” is an intimidating song, and I avoided it for years.  I actually just started including it in my sets about a year ago.

When I was about halfway through the song, I accidentally hit my mouth on the microphone when I was singing..and I hit it pretty hard.  I was so nervous that I had a bloody lip or something.  Fortunately everything went well.

How has LA been treating you?

It’s amazing here; they’re feeding us prime rib, so I can’t complain.  And they have this bacon that’s coated in maple syrup—it’s the best.

I’m confident this is just the beginning. I’ve had to start from the bottom—to really reset—so many times in my life, that I’m excited to be where I am.  When I was growing up in Traverse, I felt like a bit of an outsider.  I grew up in a trailer park south of Traverse City, and I can really remember just playing guitar and staring out the window into a field.  And now here I am, overlooking Los Angeles and eating prime rib.  Hopefully I can be an inspiration to kids out there, because hard work does pay off.

And See Ryan Whyte Maloney’s Performance On The Voice