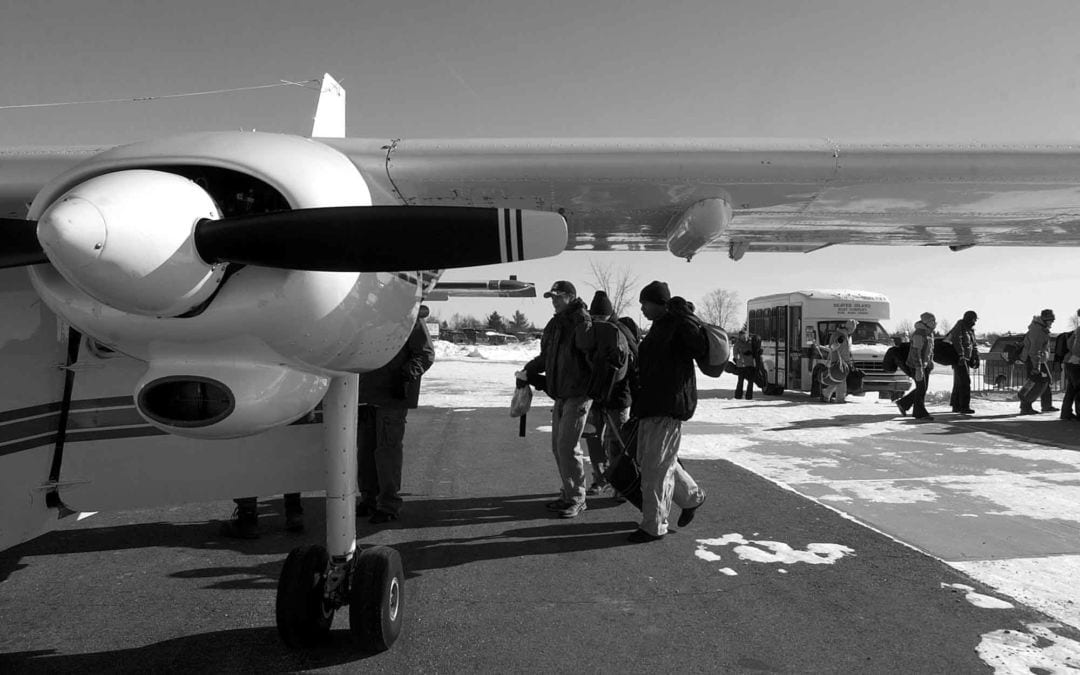 This story first ran in the March 2004 issue of Traverse, Northern Michigan’s Magazine and is reprinted unchanged.

Each year, on a patch of land surrounded by ice, two schools meet to wage friendly battle and share what it means to be an island kid on an island team. (Slide show below.)

This story germinated five years ago when our then-art director Nile Young learned of a simple ritual—a sports rivalry—that plays out on an island in Lake Michigan at winter’s tail end. Nile grew up in a small town and played sports there, so when he heard about the season finale matchup between two island schools—the girls volleyball teams and boys basketballs teams from Mackinac Island and Beaver Island—he immediately understood that it represented a distilled essence of Northern Michigan.

Nile took his cameras and a writer friend to the games at the first opportunity. But they ran into a problem. Island life means accepting some uncertainties, and Nile learned of one that day. Soon after he landed, a storm blew in and all further flights were cancelled. The team from Mackinac never made it. He spent the night driving around the island with some people he met and photographing sports signs hanging around the school for a match that wouldn’t happen.

A year later, Nile had it all arranged again. He had his writer friend in town, they were packed, and then he made a quick confirmation call to the school. Another uncertainty intervened: The cable that carries electricity to the island failed. There would be no games that year either.

Then Nile left the magazine, but the idea stayed with us. The matchup had woven itself so far into us by then that we couldn’t possibly let it go. So we asked photographer Elizabeth Conley to give it a try. We had always been impressed by the sensitivity of her photos in the Traverse City Record-Eagle (she has since taken a job as staff photographer at The Detroit News), and we knew she could bring back the spiritual sense of this important but subtle story.

And so, here we finally have it, a photographic portrait of one of Northern Michigan’s small but essential rituals. What makes this story powerful is its simplicity—and the way that simplicity stands in juxtaposition to what most of us experience in high school sports. For starters, of course, the teams fly in—two planes, eight students each.

When the visiting teams arrive, they are greeted with a lasagna dinner, and everybody eats together at a long table in the hall. That night they play a volleyball game and a basketball game. It’s always standing room only, but there are few high schoolers in the bleachers because nearly the entire school is on one of the teams. Last year, Beaver Island graduated its biggest class ever—11 students. There are no cheerleaders either. But the people still cheer, for both sides, since few of the parents from Mackinac make it over.

After the games, the teams—about 30 kids in all—meet up for a dance in the basement of a nearby hotel. The room is the size of a living room, but not a big living room.

Later, the Beaver Island kids all go home, but the Mackinac Island kids return to the school to sleep. The boys roll out sleeping bags on the gym floor. The girls get a large utility closet. Elizabeth slept there too and was relieved that it didn’t smell like gym closets often do. The talk she heard that night was teen talk with an island twist, like girls discussing the logistics of taking driver’s ed in the spring, but having to go to the mainland because no cars are allowed on Mackinac Island.

In the morning, the kids rose, ate breakfast and played rematches. As soon as the volleyball game ended, everybody headed for the airport and was gone in a moment. In a way, none of it was newsworthy, but all of it was remarkable.

Jeff Smith is editor of TRAVERSE. traverse@traversemagazine.com. Elizabeth Conley is a staff photographer for The Detroit News.