Featured in the March 2012 issue of Traverse Magazine. Get your copy.

“Fear Bombing Attack on Soo, Observers are Told,” screamed a headline on the front page of the Soo Evening News on April 30, 1942.

“Trenches Will Be Handy When Bombs Drop On The Sault,” echoed another in the Evening News of July 3, 1943.

While those headlines might seem melodramatic today, they highlighted a fear that was all too real at the time—and revealed the important role Sault Ste. Marie and the Soo Locks played in the Allied war effort of World War II. It’s a role of which most Americans, and even most Michiganders, are unaware.

At Sault Ste. Marie the St. Mary’s River drops 21 feet from the height of Lake Superior to Lake Huron. During the late 1700s and early nineteenth century, cargoes had to be unloaded from ships in Lake Superior and portaged around the rapids to be placed aboard vessels that would complete the journey to ports in the lower Great Lakes.

But by the time the United States entered World War II, four locks allowed giant cargo ships to navigate the passage. To say that these locks were vital to Allied war production would be a gross understatement. Through the gates sailed nearly 90 percent of America’s iron ore production—110.7 million tons in 1941 and 120 million tons in 1942. The ore was bound for the steel mills of Michigan, Ohio and Pennsylvania; and eventually on to factories making tanks, planes and munitions across the country. The dread that a Nazi attack might disable the locks was so genuine that, by late 1942, the military stationed 7,300 troops in Sault Ste. Marie.

There were so many troops in fact, that nearby Fort Brady couldn’t house them all. The Christopher Columbus Hall, American Legion Hall, the Union Carbide Recreation Building and other facilities were called upon to make room for soldiers. 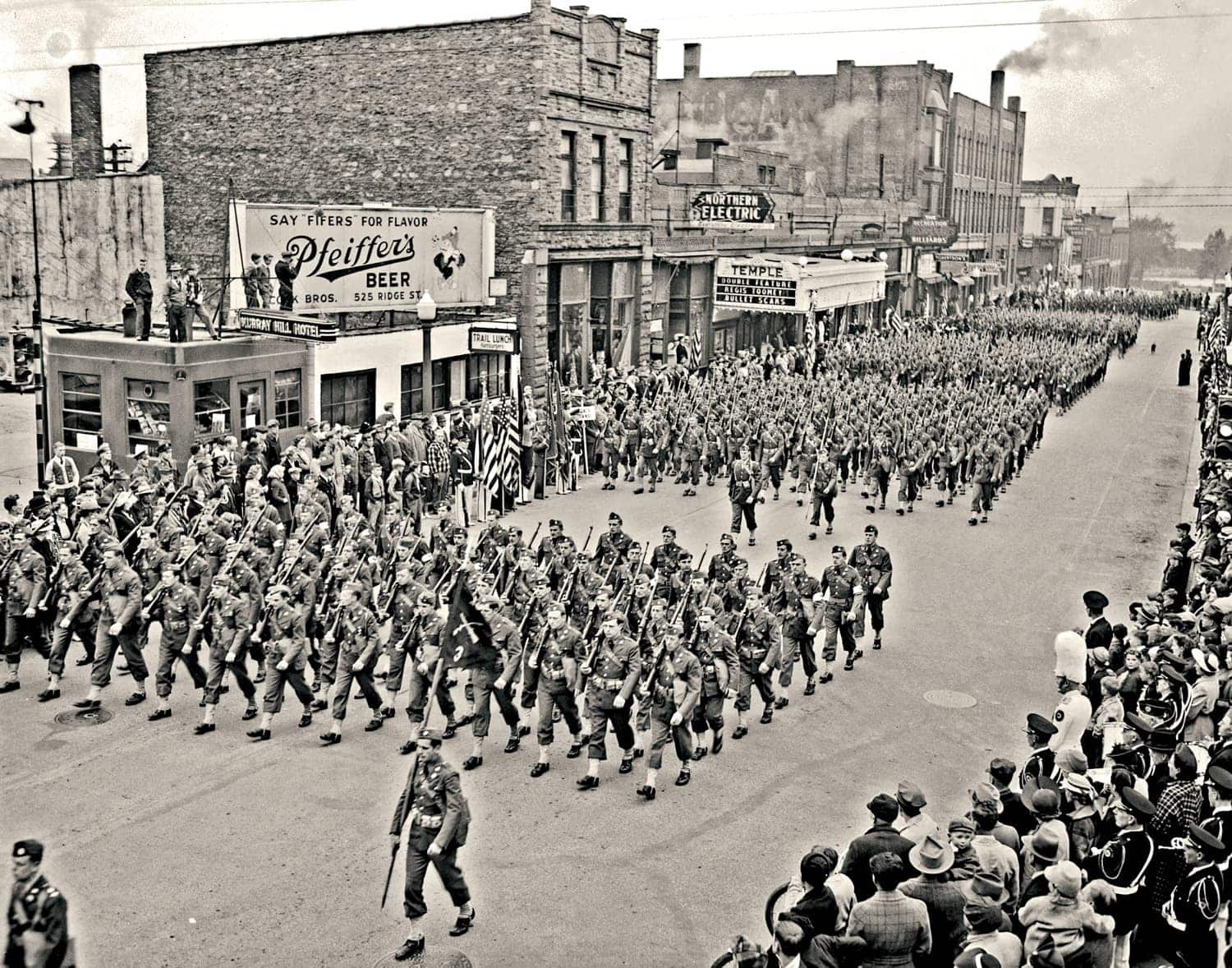 The troops, members of the 131st Infantry and 100th Coastal Artillery, had begun arriving early in 1942. They were armed with anti-aircraft weapons and used 60-inch searchlights to patrol the sky. Steel mesh nets were installed underwater above and below the locks to guard against torpedo bombs that might be aimed at lock gates.

Shortly afterward, the 399th Barrage Balloon Battalion arrived to do their part in the defense of the locks. Their barrage balloons, 30-foot rubber cows, as they were called, were filled with hydrogen and anchored in place 2,000 feet above the locks by inch-thick steel cables. More cables hung from their rubber bodies. A dive-bomber striking one of the cables would be quickly disabled—the strategy proved effective in both Germany and Great Britain. Sometimes, though, the “rubber cows” broke loose from their moorings and drifted off. Newspaper articles of the time reported the balloons floating as far away as Midland, 200 miles south. 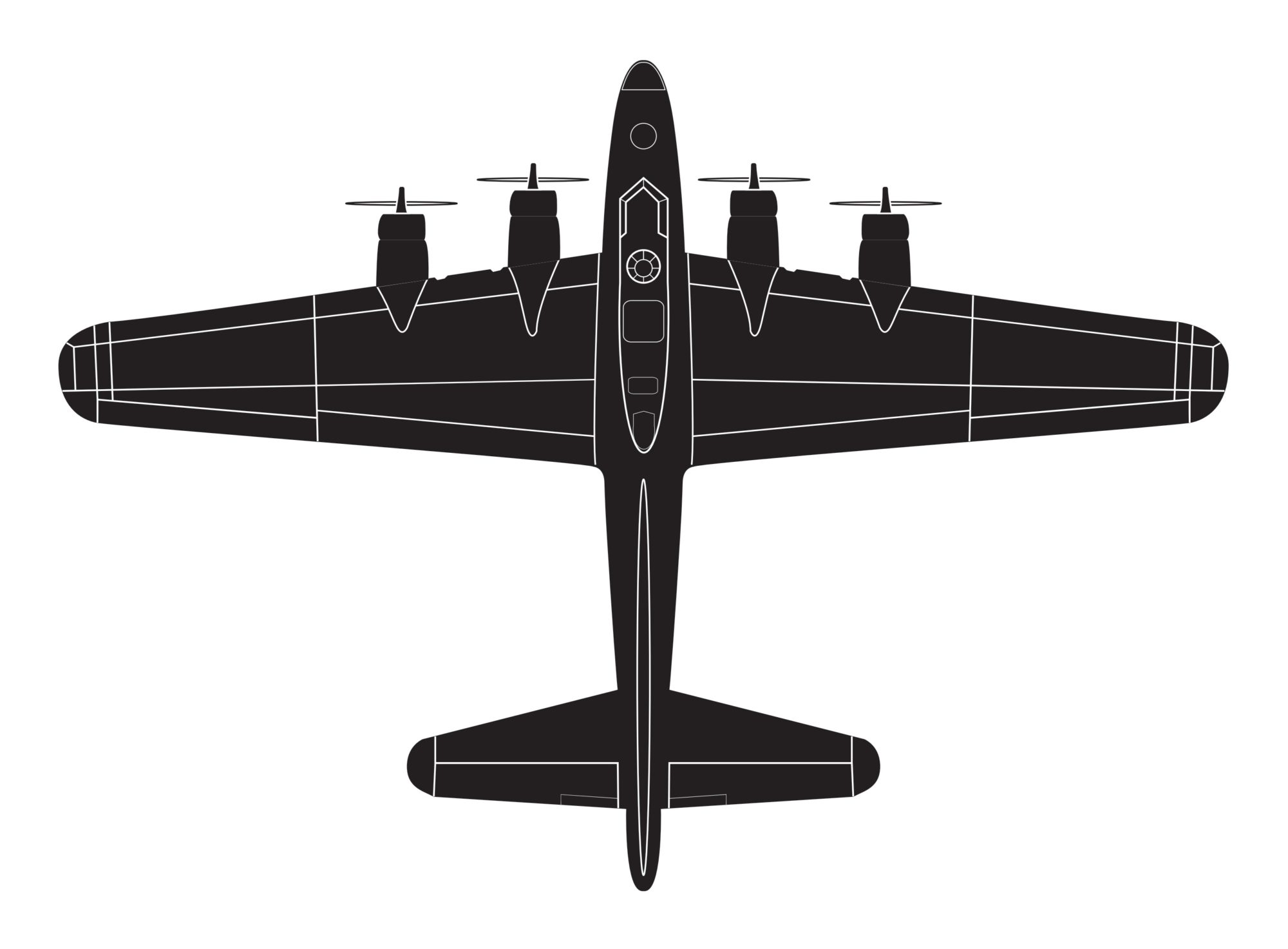 Charles Lindbergh had proven trans-Atlantic flight possible 15 years prior on his solo flight to Paris, so there was a palpable fear that the Germans might fly one-way suicide bombers to Northern Michigan from bases in Norway. Another theory held that they might smuggle sections of aircraft into the far reaches of Hudson Bay via submarine or surface ship, assemble them there, and launch an attack on the locks from northern Canada.

The backyards of many Sault Ste. Marie homes were the sites of anti-aircraft nests built of sandbags and armed with anti-aircraft weapons. Citizens sometimes joked that a family’s social standing was determined by the size of the battery in its backyard.

Mary June, past president of the Chippewa County Historical Society, has seen photographs of some of these fortifications. “They were small huts, built over trenches and covered with canvas,” she says. “They were called ‘hutments’ by the military and would house five or six soldiers and their anti-aircraft guns. The soldiers would eat and even sleep in them. Townspeople would bring them meals on occasion, and let them drink water from their hoses.”

“It was the late seventies,” she says, “and we were driving through Pennsylvania on our way to Washington, D.C., when we had car trouble. We pulled off the turnpike and found ourselves in kind of a run-down part of town.

“We found a car repair shop and pulled in. We were greeted by an older African-American gentleman who owned the shop. He saw our Michigan license plate and asked what part of the state we were from. When I told him Sault Ste. Marie, his face lit up like a Christmas tree. ‘Those were some of the best days of my life,’ he said. ‘I was stationed there during the war, and we were treated like family. One lady even brought us baked beans and home-baked bread.’

“‘That was my mother,’ I told him. I was just a young child during the war, but I remember my mother taking food to the troops stationed near our house.

“He fixed our car and wouldn’t take a cent of money in payment,” Lawrence says. “We stopped again on our way back from Washington and had another pleasant conversation.” 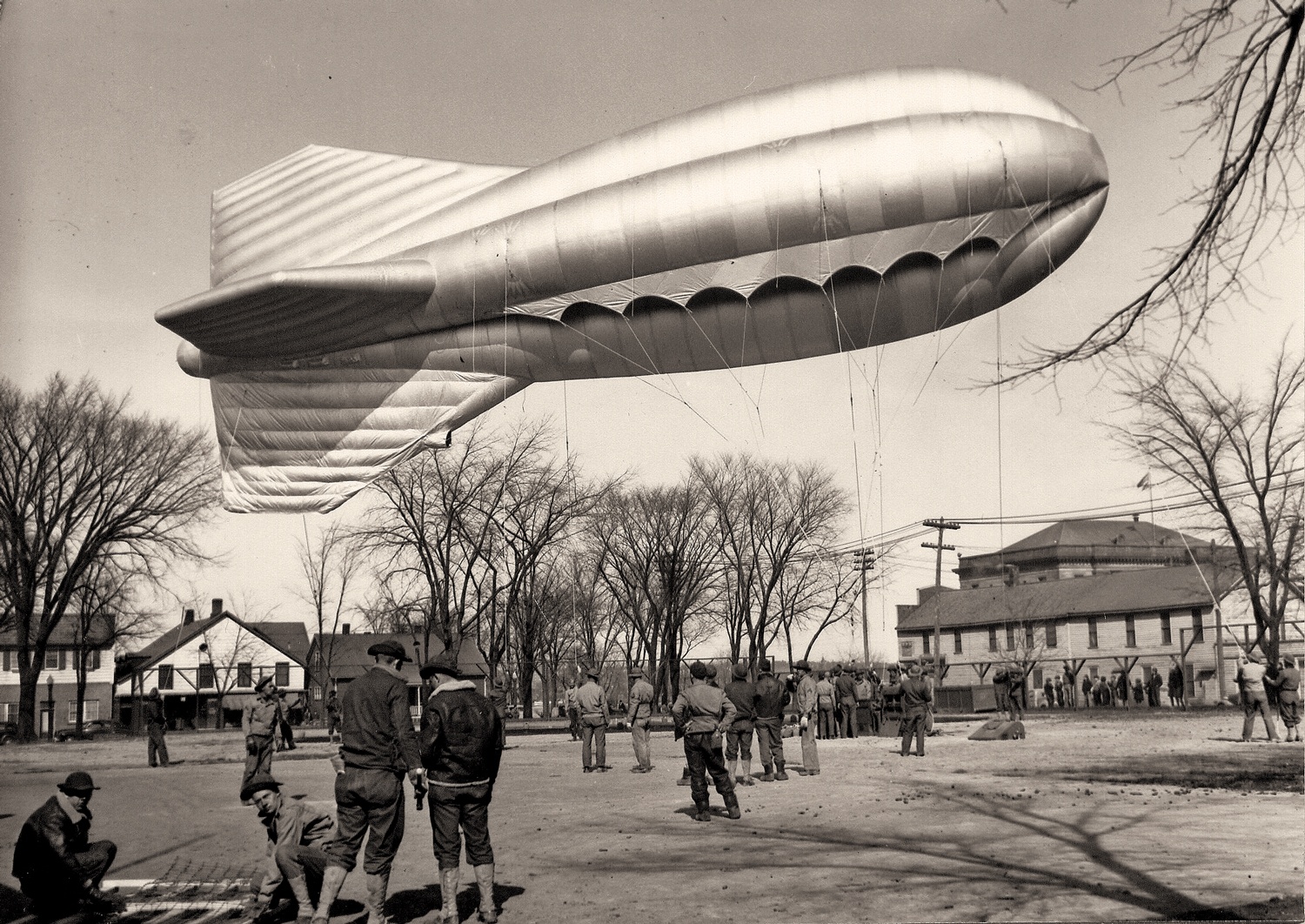 Many Soo residents joined in the effort to discourage an attack from the air. Citizens organized into Civil Defense units, and a network of some 1,000 volunteer aircraft spotters was on duty 24 hours each day.

The threat of an air attack by a foreign power wasn’t the only concern surrounding Great Lakes shipping in the early 1940s. Larger and larger lake freighters were carrying the ore vital to the war effort, and it was determined that a new, longer and deeper lock had to be built to replace the now obsolete Weitzel Lock. The St. Mary’s River had been dredged during the 1930s to 24 feet, but the Poe and Sabin Locks, which handled most of the traffic on the American side, couldn’t accommodate boats drawing more than 20 feet.

Congress ordered the construction of a new lock on March 7, 1942, to replace the old Weitzel with one that would handle the new breed of freighters. The new lock would be named after Douglas MacArthur, the war hero of the Pacific theater. Previously, the Weitzel and Poe Locks had taken eight years to build; the Davis Lock, six. But this was wartime, and the new lock had to be built ASAP.

Work began on September 1, 1942, as the initial cement forms were laid. Crews of the Great Lakes Dredge and Dock Company worked around the clock. When temperatures plunged below zero during the frigid winter months, heaters had to be employed to allow the cement to set. Work on the MacArthur Lock was completed in a mere 16 months, and dedication ceremonies were held on July 11, 1943. The first boat through the new lock was the Carl D. Bradley. The contractor and its workers received the Army–Navy E Award for their efforts in building the crucial new lock in record time. The estimated 1,000-plus construction workers added to the housing burden that already had tiny Sault Ste. Marie bursting with soldiers. 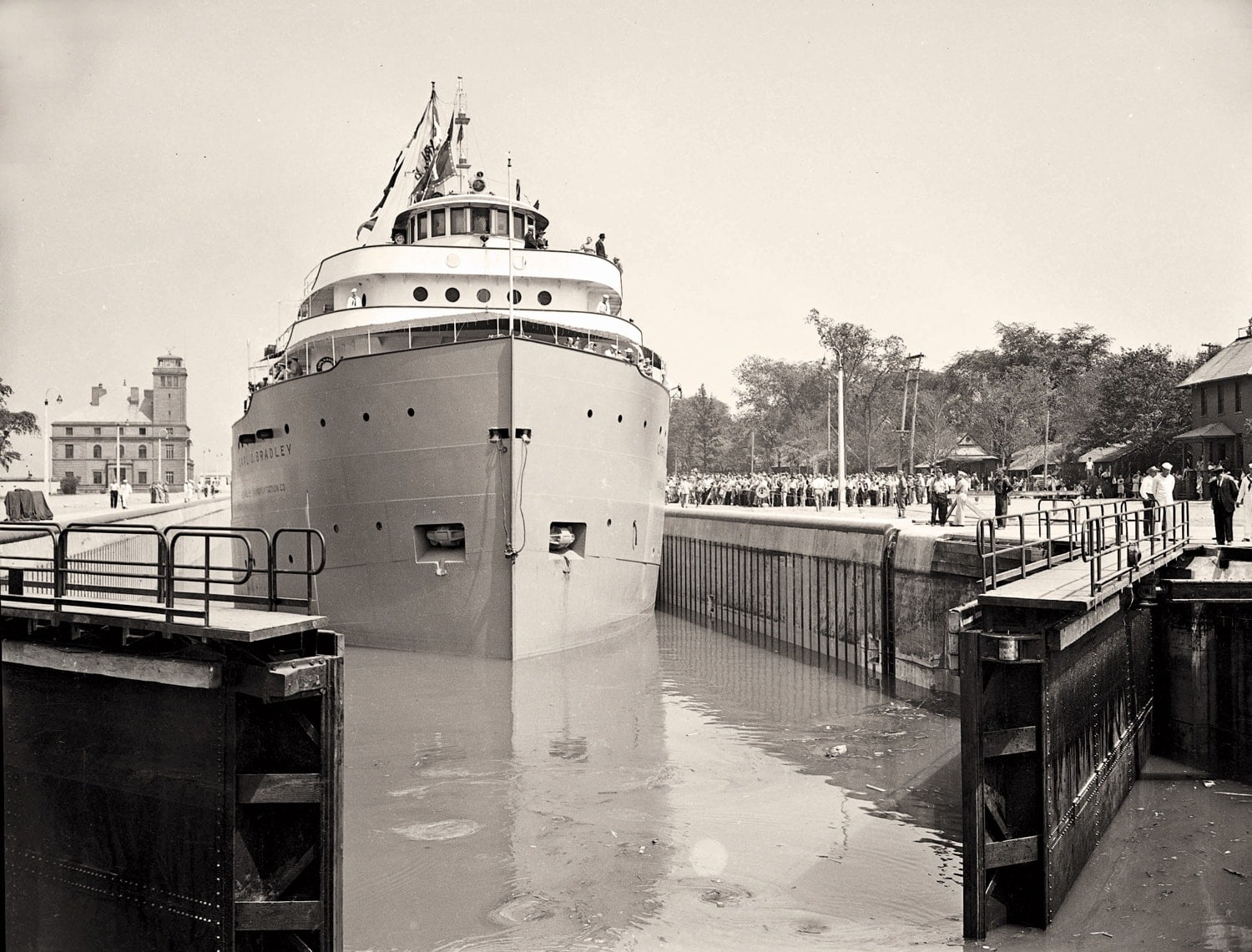 Increased security for possible enemies also resulted in less freedom for the locals. Up to this period, locks visitors enjoyed fairly unlimited access to the water and land that surrounded the passageway. One local resident, Don Arbic, reported swimming in the south canal near the Weitzel Lock when he was a boy in the 1930s. Vacationers could almost touch the giant freighters as they sat in a lock.

But security on all four locks was tightened considerably in the late 1930s as the world seemed poised to erupt into full-scale war. Adolph Hitler’s troops invaded Poland on September 1, 1939, and six days later the U.S. Coast Guard was patrolling the Soo’s canal approaches. On March 1, 1941, President Roosevelt signed an executive order creating the Military District of Sault Ste. Marie. The Japanese attack on December 7, 1941, shifted matters into an even higher gear, and by early spring of 1942, soldiers were arriving in large numbers at the Soo.

Neither the Germans nor the Japanese ever launched an attack on the Soo Locks, and by the end of 1942, authorities realized that a garrison of more than 7,000 troops to guard the locks was excessive. By September of 1943, generals cut the number of troops to about 2,500. By the beginning of 1944, the Sault garrison consisted of a single battalion of military police, as it had before the war. The Army shut down Fort Brady in October of 1945, and today many of the original buildings are part of Lake Superior State University.

Though more than 70 years have passed since WWII came to the Soo, concerns about security there still exist. The percentage of U.S. domestic ore passing through the locks has actually increased during those seven decades, to slightly more than 90 percent. As such an obvious choke point, the locks remain a key military target. But today’s security is based far more on technology and far less on soldiers. Today’s security is also far more discreet than anti-aircraft guns in people’s backyards.

So what might that security consist of? “That’s the kind of conversation we are not allowed to engage in,” said a source at the Sault Ste. Marie office of the Army Corps of Engineers, which manages the locks today.

David Warner is the author of “Dead Lock,” a mystery/thriller set in the Sault Ste. Marie of 1943. In it, Detroit Times reporter Kate Brennan is forced to leave Detroit. She travels to the Soo, where she takes a job on her uncle’s newspaper. Investigating the murder of a friend, she runs headlong into a Nazi plot to destroy the locks. Warner found the book “City on the Rapids,” by Bernie Arbic, helpful in the research for both his novel and this article. A thank you is also due to the Chippewa County Historical Society for their help.