The concept behind Todd and Brad Reed’s most recent book, Tuesdays with Todd and Brad Reed, was this: the Ludington-based father-and-son team would devote each Tuesday of 2012 to photographing every corner of Michigan.  The completion of that simple plan provided some spectacular statistics: over the course of 52 days of shooting and some 30,000 miles of cumulative travel, a total of 1014 images were compiled for the 400-page book.  To top that off, Tuesdays was one of only twenty books deemed a Michigan Notable Book of 2014 by the Library of Michigan. 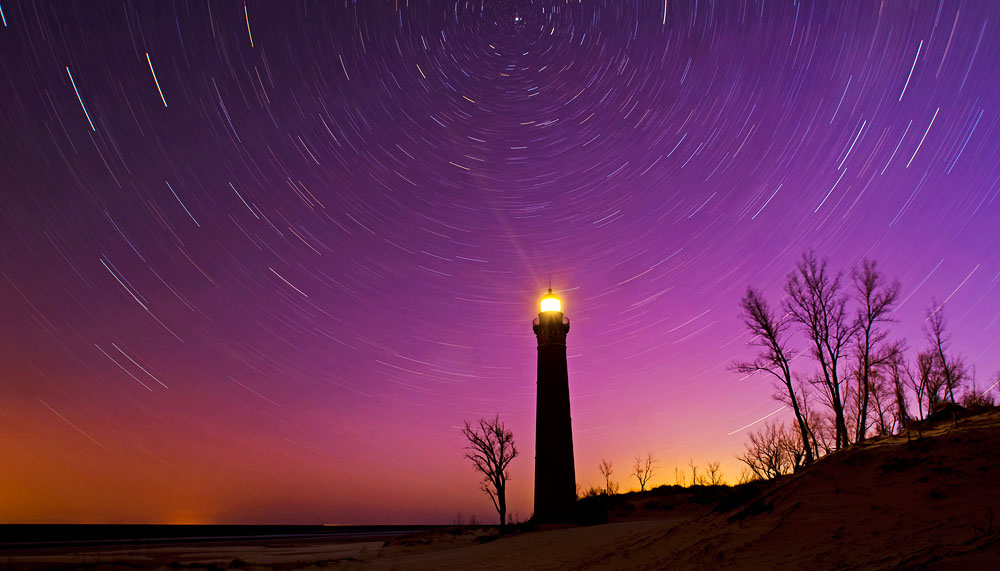 Todd Reed, the father of the duo, acknowledges that the hospitality of Michiganders was vital to properly photographing the state: “No matter whom we talked to about a favorite spot to shoot, or when we needed permission from a person who was in the frame—nobody ever said ‘no.’ Even the most rugged outdoorsmen were willing to share their moments with us.”  Those intimate perspectives contributed to Tuesdays being selected as a Michigan notable book; says Reed, “The members of the selection committee at the Library of Michigan said that they all found images that meant something to them.”

Todd and Brad first collaborated with their 2005 book, Lake Michigan Point to Point, which profiles Big and Little Sable points—and all of the scenery in between.  While both Reeds slid into careers as photographers—Todd was handed a camera to snap some photos while he was a beat writer at the Ludington Daily News, and Brad is a former elementary school teacher—the two have gone on to receive accolades from the likes of the Nikon International Photography Contest.

Despite having traveled and worked together throughout their careers, the Reeds embrace the stylistic differences that each has independently developed.  When they arrive on location, Todd Reed says that he and Brad might not even talk to each other about potential shots, but will each “just go off to shoot the same thing differently.”  Their collective work amounts to a stunning collage of images embracing every facet of life in Michigan, from the pastoral to the coastal and the modern to the modest.

Todd and Brad Reed Photography is based in Ludington, and is a featured retailer at ShopMyNorth.com

ShopMyNorth is an online marketplace that supports and promotes Northern Michigan businesses and craftsmen.  If you’re a merchant interested in placing your company’s products on ShopMyNorth, please contact Drew Warner at 231.941.3102.

Shop for Todd and Brad Reed Photography’s Publications at ShopMyNorth.com