Gliding Toward the Sun, an Essay on Cross-Country Skiing

I felt strong and untouchable, even as I felt small and expendable, suspended on the face of this 1,000-acre lake, alone.

I stood on the edge of the lake and had my doubts. It had been a light winter. The lakes had just frozen over, and it was late February. I didn’t dare venture onto the ice in a strong, blinding winter, so why now, with just an inch of snow hiding the thin ice and fault lines? But this year wasn’t like most years. I’d just lost my mother.

I clipped my skate skis on, then slid, skated out onto the lake. Near the shore, the snow was full of tracks; men’s boots, the tread thick and decisive, snowshoes, their biting claws sliding, with little to hold onto. I found my confidence in this first gathering of tracks: one on top of the other, trampling down where land turned to ice, their collective trust enough.

I skated two full strides and figured I was above water over my head. Few swam in these waters even in the hottest days of July because it would mean bringing out a souvenir leech between the toes. It was just as well. Lake Dubonnet is a lake’s lake—all business, no play. The shores housed a thick racket of brush and trees for birds and deer and coyote. The water bred mosquitoes and bluegill and bass. I loved the lake for its solitude. Not once had I come here to find I couldn’t hear the silence on the other side of the lake.

But today was different. Gone were the muddy brown features of a wild lake. Instead, the surface and shore shone a pristine white. The entirety of the lake was on display, as far as I could see, barely touched by man.

I went out farther knowing when I was now over a decent fishing hole, then farther, a spot where my mother once lost her sunglasses over the edge of my father’s boat. Still farther, the wind pushed at my back and I found my strides growing longer, despite my scant practice on skate-skis. The faster I went, the braver I felt, my grief chasing but not reaching me. I turned and headed straight into the wide open.

I skied into a white expanse of untouched snow unlike anything I’d ever seen. I was shocked at the breadth of it. I felt strong and untouchable, even as I felt small and expendable, suspended on the face of this 1,000-acre lake, alone.

I saw the bald eagles’ gnarly nest showing through the bare limbs on the island in the middle of the lake. I pushed hard, trying to come up fast enough to get close to them, watching two dark shapes sit and stay in the branches. As I approached, one moved. It fell forward, then spread its wings and sailed off.

I picked up speed, hoping to see the other. I was rewarded. When the second eagle acknowledged the shush of my skis and the tick of each pole, it flew over my head, the head and tail feathers white against the blue sky, so close I could see the curl of its talons. A flush of crows called then and left the next island over; the eagles were on the move and would have right of way.

I followed, careful to keep my eye on the ice in front of me, even as the eagles needed watching. And no sooner did I get to the island than the eagles took off again, this time heading east.

I went again, cruising the surface of the lake, crossing a set of coyote tracks, one paw dragging in the snow. I knew the light winter had likely spared its life. Then I saw deer tracks and rabbit tracks, each animal free to explore the half dozen islands of Lake Dubonnet. How, I wondered, did that feel, to have an all-access pass to the lake, if just for a few months of the year?

I realized then, that I knew. Because I was doing just that, sailing and turning and skiing and exploring the edges of the islands, the white ice under my skis a conduit for an experience never had by boat.

Finally, I worked up my nerve to cross to the last island, as far back as the lake reached. I was spent by then but happy, an unfamiliar feeling that February, the sun separating each crystal of snow. I found the pair, both the mother and father, perched in a maple, side by side, sunbathing.

I stopped one last time in the quiet, standing below the eagles, on a simple white sheet of earth, without my mother. But I found, too, that I was face to face with the sky and, perhaps, heaven too that day. For the first time, I felt that the two spaces weren’t so far apart after all. 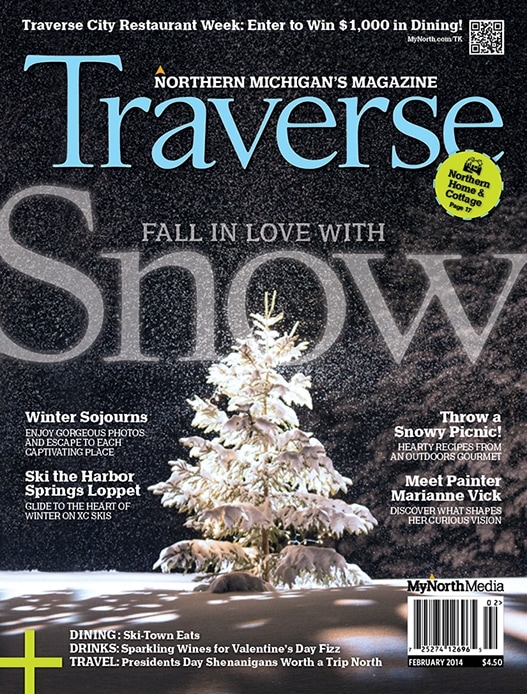