This story first ran in the September 2004 edition of Traverse, Northern Michigan’s Magazine.

On Beaver Island’s far shore, the Deerwood Lodge awaits  with fine cuisine, relaxed decor and  a blessed dose of solitude.

When Scott Prinz needs a break from a hyper-speed life, he craves a true getaway, a private place free of phones and e-mail. He wants a place with character and quietude. A place where somebody is taking care of the details, where even the chocolate on the pillow is special.

Over the years Prinz has visited many fine lodges, but topping his list of great getaway places is Deerwood Lodge, Northern Michigan’s newest small-scale luxury inn. The two-year-old, $3 million, six-suite lodge is the perfect place to find rustic elegance and ultimate privacy. Deerwood sits on the western shore of Beaver Island, 30 miles into Lake Michigan and well beyond cellphone range.

Prinz expects that within a few years the Deerwood will be regarded as one of the country’s very best small luxury inns, ranking up with Tennessee’s award-wining Inn at Blackberry Farm. That sort of status certainly stands as the goal of owners Jon and Sally Fogg, of Holland, Michigan, who have grand ambitions for their B&B-sized operation.

Just over six years ago, Jon ran a company that manufactured bottling machinery. Sally was an active, stay-at-home mom. Then a tragedy hit. Their 17-year-old daughter, Jennifer, was killed in an automobile accident.

It was then the Foggs decided to realign their priorities and follow a different dream. They looked to Beaver Island; Jon’s family had owned a cottage there since 1954. The couple eventually purchased 300 acres of rolling hills and hardwoods on the island’s west shore with half a mile of beachfront.

The Foggs took three years to build the lodge, naming it Deerwood for the many deer that Jon says were “just jumping all over the place.” The couple designed Deerwood to have the look of a classic Northern Michigan cabin—a front porch of split logs; tiers of wooden decks in back that lead to the beach; a massive, 28-foot-high stone fireplace in the great room, the mantel carved by a local Native American artist. To assure a distinctive regional look, the Foggs relied on the talents of local craftspeople.

“We wanted something that would fit in on the island,”

Jon says. “But it had to have all the amenities.” And so it does.

Deerwood’s meals are not so much cooked as sculpted by an honors graduate of the highly regarded Culinary Institute  of America. As guests arrive in the afternoon, they are seated by the fireplace, served a glass of wine and prompted to choose from at least six gourmet hors d’oeuvres, like a garlic feta spread with pecans and grapes, and marinated grilled shrimp with cilantro garlic mayonnaise.

Following the theme of a pure getaway, the rooms—each with 10-foot ceilings and its own distinct Northwoods design—have no TVs or telephones. Alas, the lodge does have both.

Naturally, each suite has a view of Lake Michigan or the surrounding forest. The surprise is that every bathtub also has a view. And no cold toes on the bathroom floors; they’re all heated to 75 degrees. In each shower is a hand-painted tile displaying the tree-theme of the room, oak, birch and so on. Sheets are sewn from high thread-count Egyptian cotton.

Despite all this attention to the finer points of guest happiness, it must be admitted that the singer-actress Madonna didn’t take to it. Islanders talked for weeks last year after the star visited briefly with Guy Richie and a small entourage. Fogg says only that Madonna wanted to swim, but she thought the beach was too rocky, a rockiness typical of the Great Lakes during times of low water levels. After two hours the material girl, well, dematerialized.

More interesting, though, was that a few islanders got confused about the story of Madonna’s visit. They thought the Deerwood visitor was not Madonna the star, but their own Madonna McCafferty, a charming 80-year-old who grew up on the island. “But,” they wondered, “what was Madonna doing there with some guy?”

Islanders have come to take a personal interest in Deerwood, especially since so many of them have been involved in its creation. Touches like Linda McDonough’s handsewn duvets on the beds have made a distinctively Beaver Island place.

Skip Duhamel, a local Native American carver and totem pole maker, carved the image of a resting fawn on the fireplace mantel and the animals on the newel posts, including a malamute dog, a loon and a bear.

Duhamel, like many islanders, takes on a variety of jobs to survive on the island. During the warmer months, he is a full-time commercial fisherman—the last of a once-thriving island industry. In cold months, he works as a plumber.

Fogg discovered Duhamel during a winter when he was installing plumbing at the lodge. Duhamel said, “I could really carve you some neat stuff.” And he did.

Deborah Harwood is the executive chef who prepares Deerwood’s meals. A woman with a rollicking sense of humor, her job history has ranged from fancy dish preparation at tony restaurants to hawking hot dogs from a cart on Main Street of St. James, the island’s village. Of course, she sold only the best kosher dogs.

Harwood has been on the island half a dozen years, which qualifies her as a local, but not as a true islander. The 500-plus Beaver Islanders, like island people everywhere, do not consider you to be a true islander unless you were born there. Harwood, 36, is from Blairstown , New Jersey, and graduated with honors in 1996 from the Culinary Institute of America in Hyde Park, New York. She then landed an internship at the Inn at Blackberry Farm. Up North, she has served as a chef at Charley’s Restaurant in Charlevoix and at the Bay Harbor Yacht Club, before moving to Beaver Island where she worked for two local restaurants preparing basic fare.

Now with her chef’s hat back in place, she’s turning out remarkable cuisine, much of it with a distinctive island character. Dinner is four or five courses, often featuring fresh, sauteed lake trout (caught by Duhamel in Lake Michigan, just off the Deerwood beach) with a carrot chutney slaw or a grilled black angus beef tenderloin with a garlic polenta cake, wilted greens, onion rings and an onion jam.

Lunch could be a picnic pack with a blanket that you can carry to Barney’s Lake, less than a mile through the woods. The meal might include marinated chicken breast on a whole grain baguette with spinach, goat cheese and onion jam.

All of it—the fresh, local cuisine, the rustic, refined decor, the sense of island solitude—adds up to the right mix for a detail-minded traveler like Scott Prinz. When he turned in for the night he found a lush strawberry, hand-dipped in fine chocolate at his bedside. 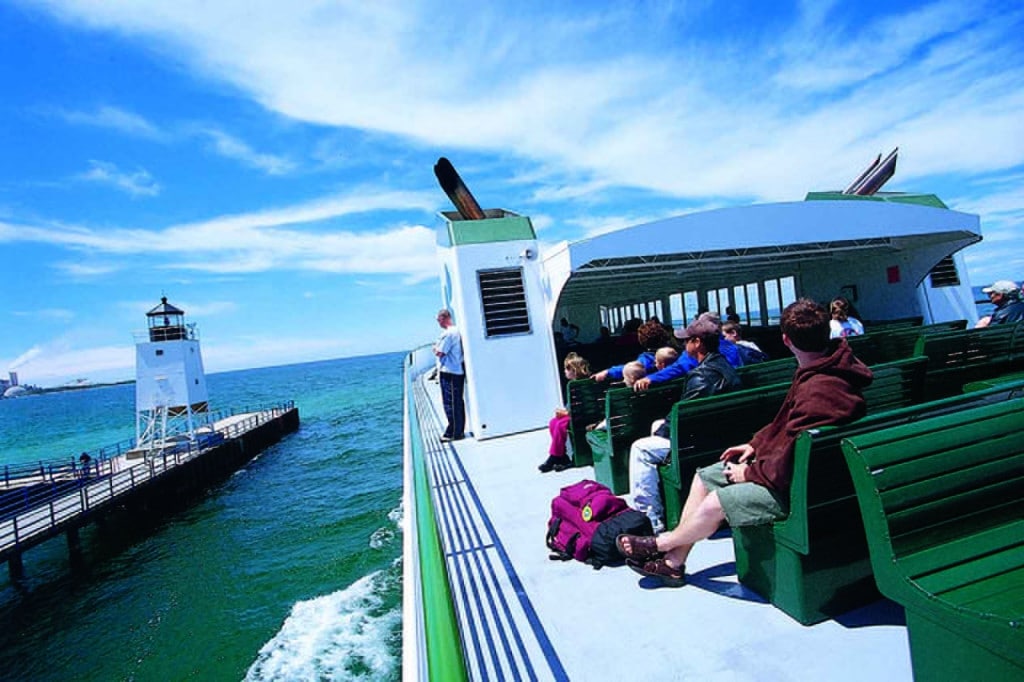 To reach Beaver Island, you must either take a ferry or fly.

Most people enjoy the 2-plus-hour ferry ride from Charlevoix, which during summer months runs three times a day on weekdays and four on weekends. In fall and spring, usually once a day. Bring a sweater or jacket for the ferry ride. Even in July, the passage can be chilly. For sailing times and prices, contact: Beaver Island Boat Company at 888-446-4095 or www.bibco.com . You can bring your car for an additional charge.

The Old Mormon Print Shop is worth an hour. You’ll learn about one of the most bizarre figures in Michigan history: James Jesse Strang, a 19th century Mormon leader who declared himself king of the island and was even known to strut about in a paper crown.

The Maritime Museum, located in an old fishing shanty, gives a good sense of when Beaver Island was at the heart of the best commercial fishing in the lakes.

The island offers prime backroad driving, especially in October when dirt roads are draped by fiery colored branches. Make an island circle tour with stops at the Old Beaver Head Lighthouse on the south end of the island and at Theodor Protar’s cabin on Sloptown Road. For decades, Protar was the island’s unofficial, unpaid doctor.

In recent years, horseback riding along the island trails has boomed in popularity. Get your horse and guide at Unfinished Farms Riding Stable, just minutes from Deerwood (231-448-2639, islandhorses@msn.com).

Beaver island trails deliver fine hiking and camping, too. Some 35 percent of the island is state land. Swimming from the island’s many isolated beaches can be superb. Beaver Island has 10 miles of shoreline. Beaver hits its prime in mid-July when the water warms up and the black flies disappear.

Learn to kayak, go on organized tours to the outer islands, or snorkel down to one of the sunken shipwrecks. Check out Inland Seas School of Kayaking (231-448-2221, www.inlandseaskayaking.com) on Main Street. You also can arrange to scuba dive on sunken ships with Paradise Bay Dive Shop (231-448-3195, www.paradisebaydive shop.com). For golf, head to Beaver Island Golf Course, 231-448-2594 (summer).

In fall, deer and pheasant hunting are popular. And fishing for pike and bass is good on some inland lakes.

Restaurants are few, but generally good. For an upscale meal with a fine view of sunset over the water, try Nina’s at the Beaver Island Lodge. Hit Dalwhinnie on Main Street for breakfast with fresh-baked cinnamon rolls. Lunches are first rate at the Stoney Acre Grill, in an old barn on the edge of town, and don’t miss the cheesecake. Find local color and good bar food at the Shamrock Bar & Grill on Main Street.

As for fudge, you can probably find some. Just don’t even think of calling it Beaver Island Fudge.

The lodge is open pretty much year round. –Prices range depending on the size of the suite and your meal plan. The least expensive is bed & breakfast. With dinner the price goes up, as it does for the addition of lunch. Prices for two people in a suite range from $275 to $450, plus 6 percent Michigan sales tax and 18 percent service charge. Also Deerwood will cater dinners or lunches for as many as 35 guests. Contact: 231-448-3094 or www.deerwood.net.

For details on other aspects of the island, including lodging, restaurants, hiking trails and history, contact the Beaver Island Chamber of Commerce at 231-448-2505 or www.beaverisland.org.