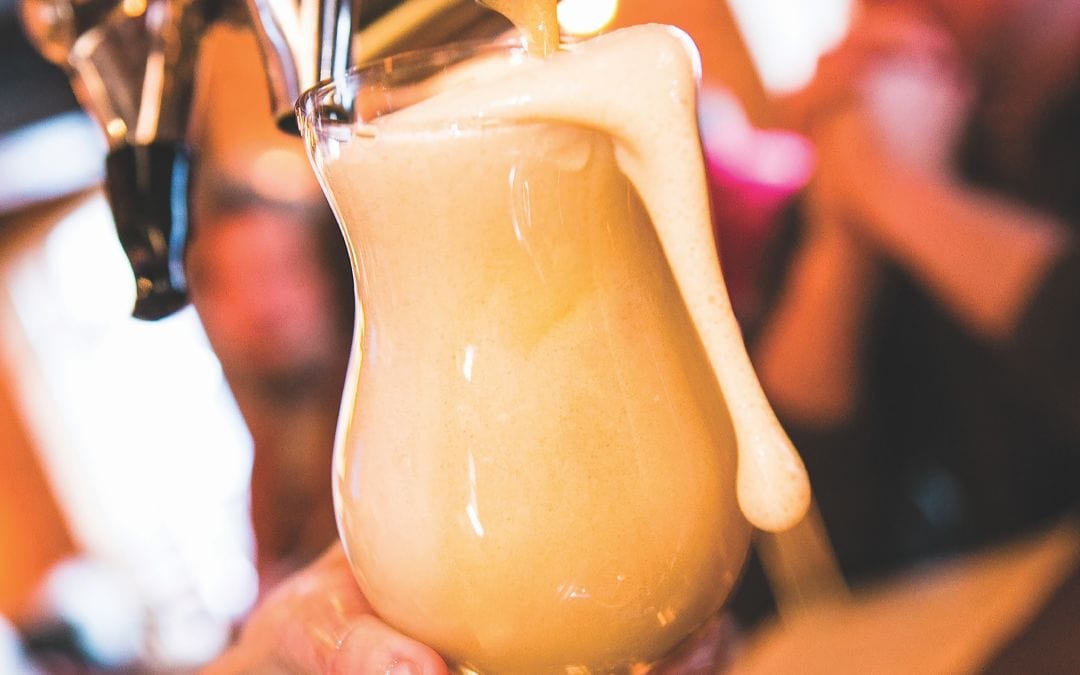 5 new microbreweries in Northern Michigan have entered the frothy beer scene. Grab your pint for a tour of the latest brews in Traverse City, Petoskey, Frankfort and more.

As America’s microbrew movement reaches fever pitch, Northern Michigan brewers are doing their part to keep the froth frothy. Tasty quaffs and warm, inventive pubs are convincing more northerners than ever to leave the factory beer on the shelf and settle in for a handcrafted experience. Here then, five of the latest additions to our Northern Michigan microbrew scene. (See the complete list of 22 Northern microbreweries to continue your research.) Salut! 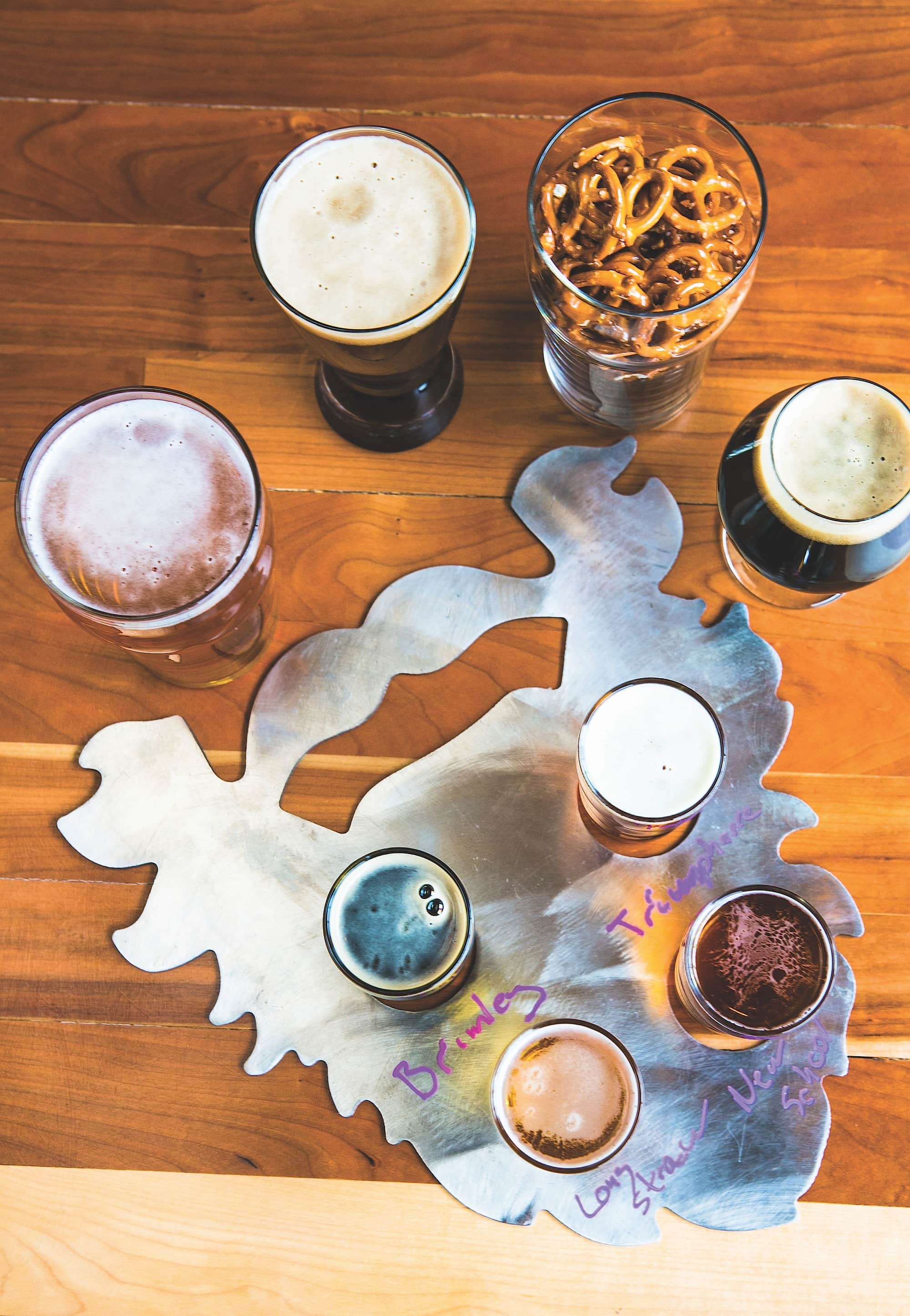 In each of us there lives a curiosity drawn to a hideaway pub. And Beards Brewery delivers on hideaway. A small sign along a Petoskey side street offers the only clue that through the wrought-iron gates and down a narrow hallway (squeezed between a ladies’ fashion store and a gift shop) you’ll find a tiny microbrewery that is at once cozily dark and warmed by the glow of skylight (during the day, anyway).

Pals Benjamin Slocum and Peter Manthei founded Beards just post-college, looking for a way to move back to the hometown they loved. “We were each home brewers, and we noticed that our friends just couldn’t get enough of what we were making,” Slocum says. So a brewery seemed kind of a natural. They found a tiny space, gutted it and created a gathering place that encouraged talking and sipping. You’ll find board games not TV’s in Beards. And you’ll have to bring your own food. “People aren’t sure if it’s allowed at first,” Slocum says, “but now people have potlucks here. One group brought in Thanksgiving dinner leftovers the day after.” 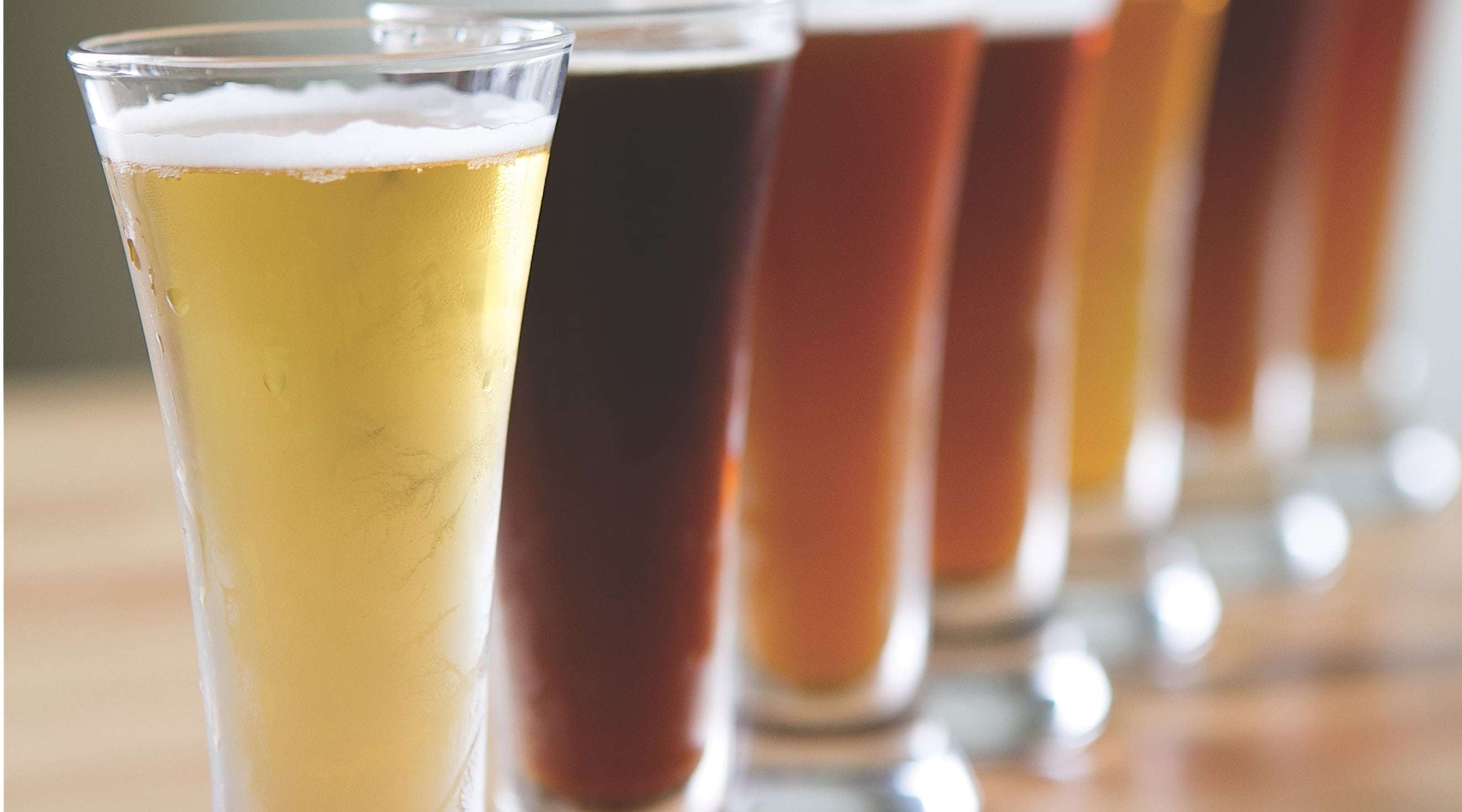 Northern Michigan wineries launched a booming agritourism world by fusing farming (grow the grapes) with production (make the wine) with direct sales (tasting rooms). It’s a formula that a handful of microbreweries in America have tried, too, and one that naturally seized the imagination of inventive brewer John Niedermaier, a man who, near as we can tell, lives to brew where no man has brewed before.

Pull into his Brewery Terra Firma parking lot a few miles south of Traverse City and you’ll see the set pieces: farming (8 acres’ worth of garden and hops yard, classic barn, bee boxes and even an old farmhouse tucked back in the trees), production (brew house in the new building) and tasting room (snappy and sleek microbrew pub with hip art on the walls and an array of chrome taps shimmering behind the bar). What you don’t see is even more ingenuity hidden in the infrastructure: a heating exchange system that captures heat from the brewing process and warms the building; a wastewater treatment system that channels water from brewing (takes about five gallons to make one gallon of beer) out to the crops for fertilizing and irrigating. And of course Terra Firma composts spent grains.

All cool, but, hey, you’re here for the beer. And Niedermaier doesn’t disappoint. He masters the stalwarts and offers up a steady stream of inventive brews flavored from the garden out back. Regarding planting, he told the farmer, “Throw me some curve balls. Give me some weird stuff. Force me out of my box.” Tip: bring an adventurous spirit, but ask for a taste before ordering a pint (honey rye beet beer, noted). Food not made here, so bring or order a delivery. No TVs! 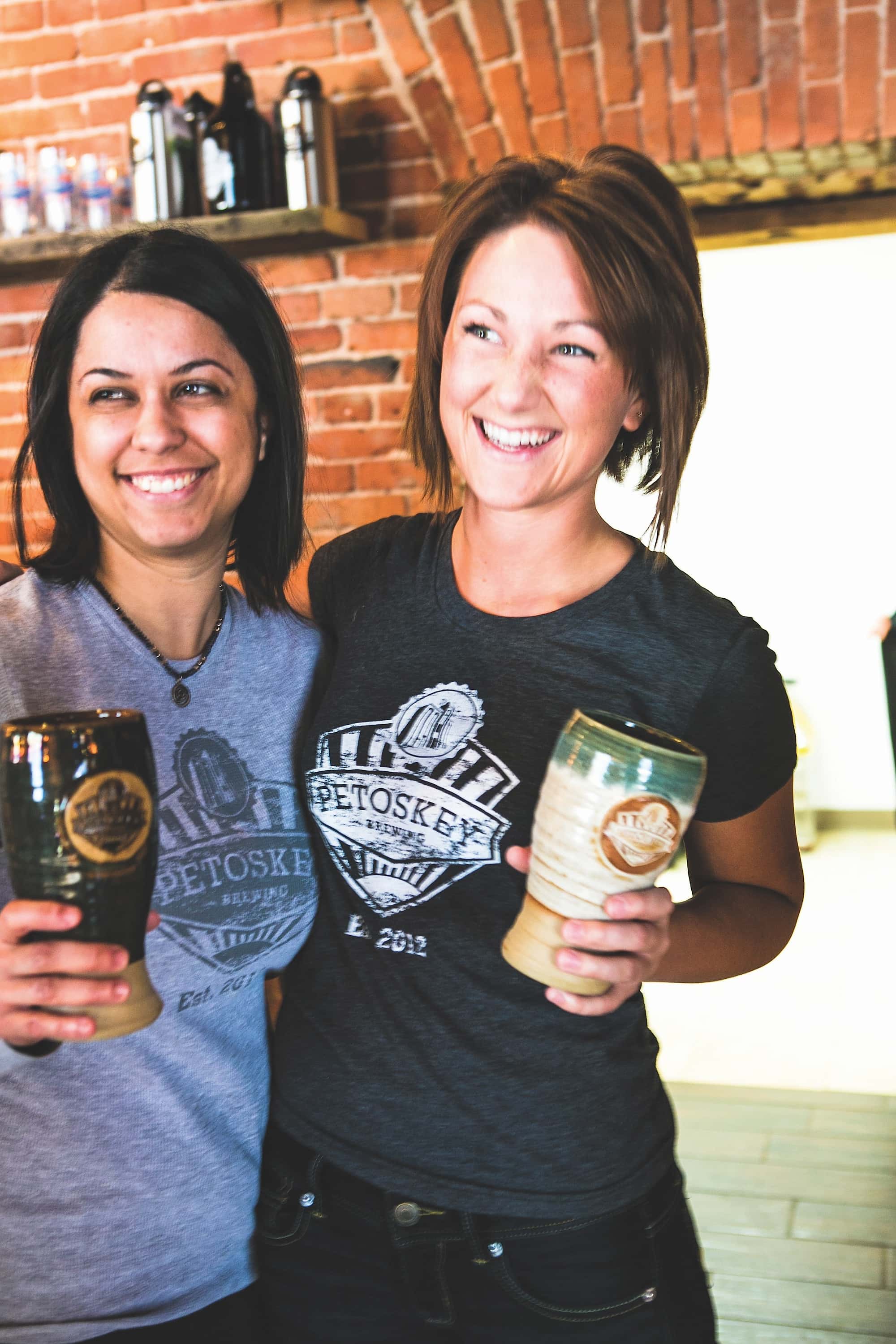 You know the feeling: something off-kilter with the universe suddenly righted. That’s the sense people around Petoskey had when the old Petoskey Brewing Company building reopened as … the Petoskey Brewing Company … after nearly a century-long hiatus. Built in 1898 and closed as a brewery in 1915 when the county voted to go dry, the building had endured a long series of random re-purposing until Patrick Dowd and Lou Gostinger decided it should house their brewery dream.

They launched the renovation in April 2012, gutting the interior, replacing all doors and windows, reclaiming old hemlock and allowing the space to re-emerge. One dramatic touch: that 20-barrel brewhouse gleaming behind the glass wall as you enter. “We let the building speak for itself,” Dowd says. Expect a warm space where people like to hang out. One less visible element that people appreciate, Dowd and Gostinger invested in sound deadening materials in the pub—yelling not required. More crucial, they insisted on drilling down to an artesian spring for the beer water, like the spring that fed the original brew house.

Neither Dowd nor Gostinger are brewers, but they know beer and knew the style they wanted to brew: artful, high quality renditions of classic flavors. “We don’t do anything too whacky,” Dowd says. Apparently the strategy is working. After just one year, the pair is planning to triple production, filling out that old space with even more gleaming tanks. Credit, of course, also goes to brewer Brett Emanuel, hired from Battle Creek’s Arcadia Brewing, and recently, production brewer Dan Heisler, hired from New Holland Brewing. 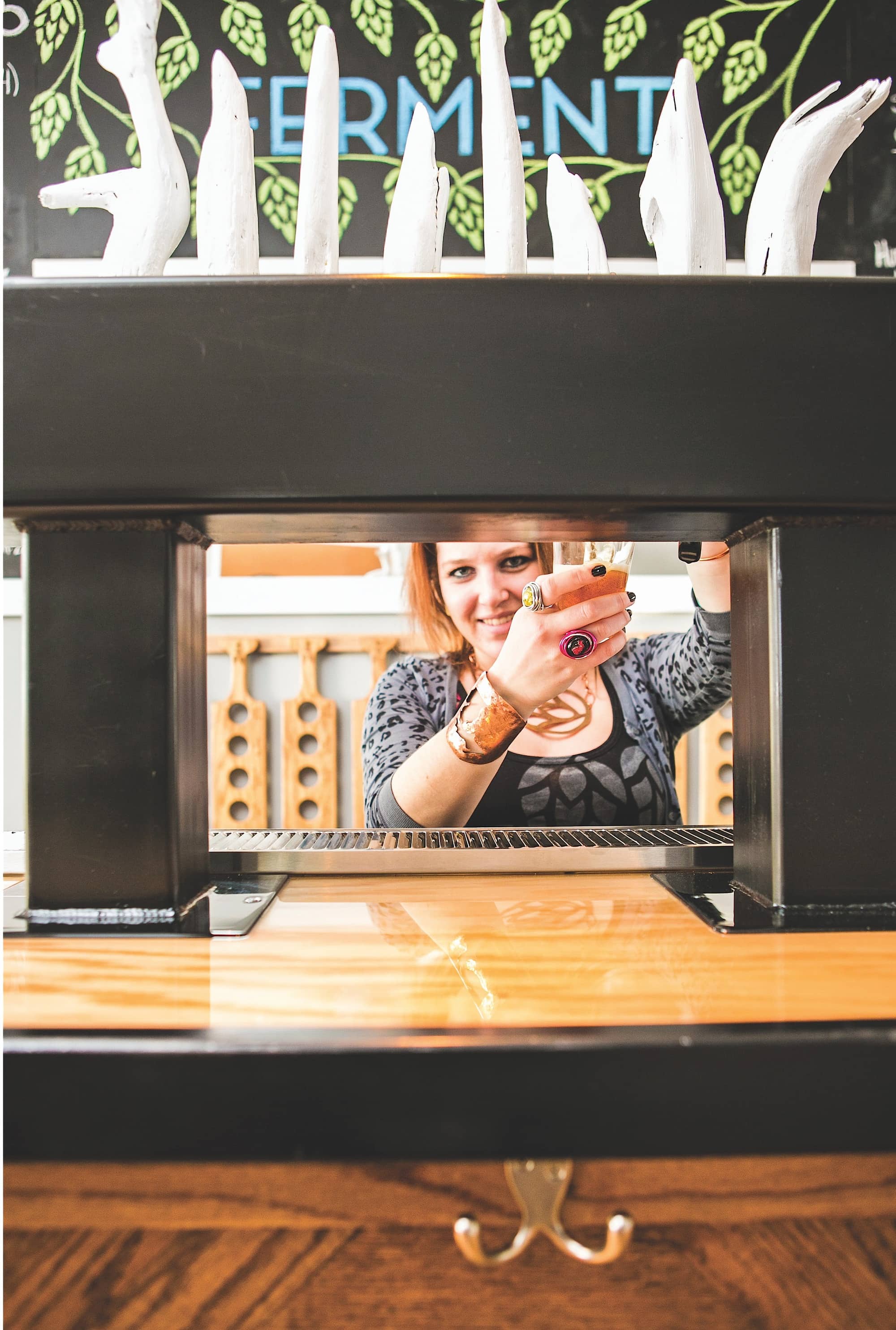 Step into Brewery Ferment and you have the sense you’ve walked into someone’s home. The space is close, intimate, and that sense is amplified by the people who work here: just three of them. So when you stop by, it’s kinda like visiting.

“We want a place where people feel welcome, but also where they feel like they are a part of it,” says brewer and co-owner Dustin Jones. He moved back to hometown TC from Chicago, along with his girlfriend and his sister, to open Brewery Ferment in late 2012.

Like so many northern brewers, Jones began brewing at home. “We’d have these little beer tasting parties and friends would come over and play games, and my beers were being rated better than the commercial ones,” Jones says. He came to the natural conclusion: “Man, maybe I could do something with this.”

The team wanted to start small, not go into debt, not go beyond their means. So they signed a five-year lease on a small storefront at the south end of Union Street’s business district. Here, where homes and shops intermingle, the Brewery Ferment compadres found the neighborhood vibe they sought. They renovated. Sanded the floors to a honey glow, built tables to match. Kept the windows big and the light bright.

At first they didn’t have a TV. But some customers said they’d stick around if they could catch a game. So Brewery Ferment added a screen. “Now we open on Sunday for football, and I bring some food for everybody,” Jones says.

Jones’s brewing philosophy is likewise straightforward: he wants a range of beers, but also a solid lineup that customers can count on, with experiments cycling through around the edges.
“I was adamant about beers that will hang around; I focus on recipes I’ve developed and honed,” Jones says. 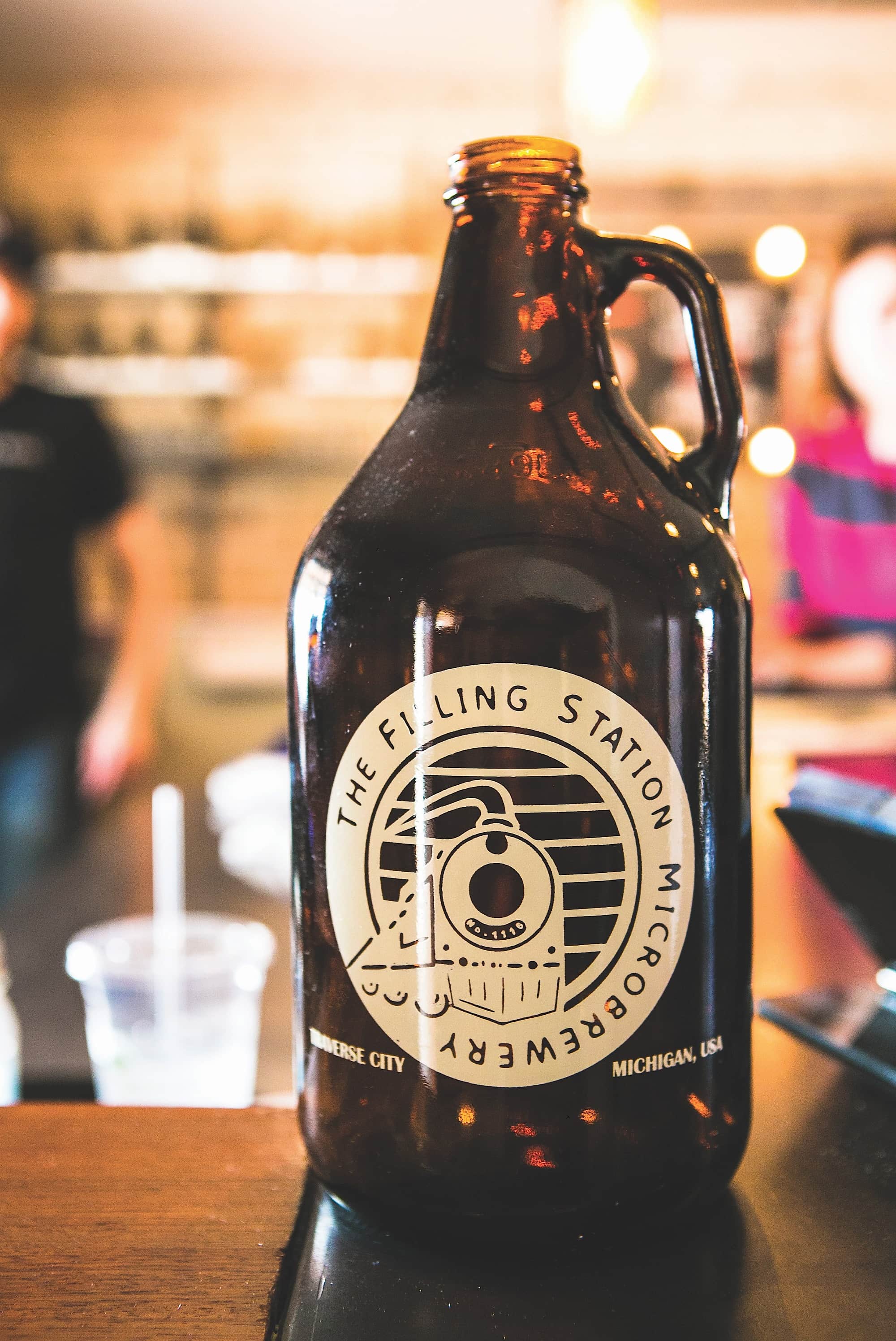 Savor the approach to the Filling Station. Walk along the old rail station platform, let your eye run down the tracks, feel the stretch of the long, low roof overhead. Is good. And good inside too.

The Filling Station is the dream incarnate of former engineer (mechanical, not railroad) Ray Klepper, who was looking for a way to express a pent up creativity and bring his family together in a business, explains son Todd. Son-in-law Dave is the brewer, sis helps out at the bar, Todd manages, there’s an uncle, a cousin … and they’re putting out remarkable beer and food in a remarkable space.

Reshaping the interior, the Filling Station crew walked a design tightrope. “Using a historic space, you don’t want to do too much to it, but we wanted a little bit of modern twist and to bring some warmth,” Todd says. The result is a big-windowed, light-filled gathering place that serves up reaching views of Boardman Lake to the south. Bonus comes when the snow melts and you can sit outside on a warm evening under that roof, and time travel beside the tracks with pals.

On the beer board, expect a steady mix of recipes and quality you can count on. Train-related names, naturally. On the food menu, expect some of the best flatbread pizzas you’ve ever had. The Burlington Northern, with pear, prosciutto, shallots and more is … well … just order it.

Beer Here! Complete list of microbreweries from Ludington to the Mackinac Bridge. 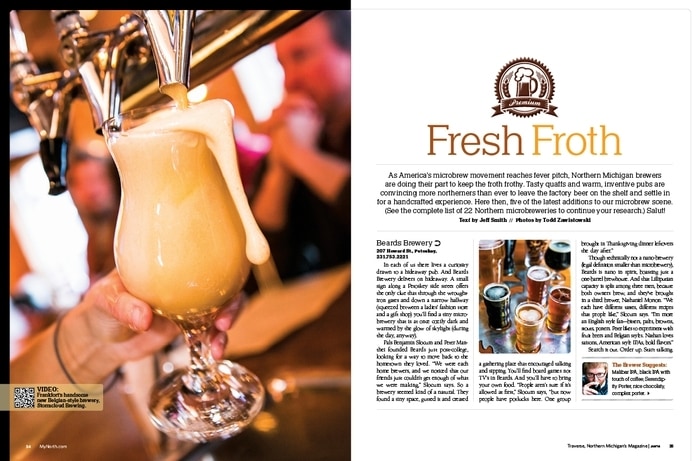