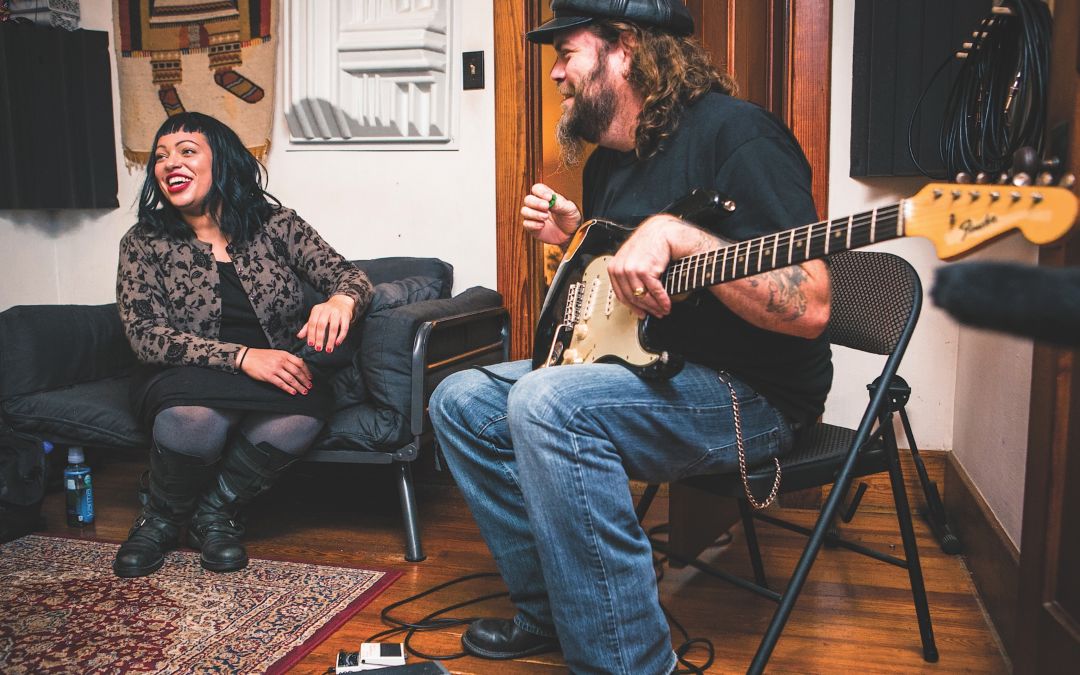 Behind the door of his humble Northern Michigan home, Aaron Wolinski is ?grooming Traverse City’s music scene for the national stage at Spiral Sound recording studio.

A couple of miles south of Traverse City, on Cass Road, there’s a modest farmhouse with black shutters tucked a bit back from the road. It’s sweet enough, and driving by you might not notice it there along a stretch by the nature center. Unless, of course, you got close enough to hear that this house rocks with Aaron Wolinski’s musical dream: Spiral Sound, a recording studio that has in its DNA a powerful belief in Northern Michigan musicians. Wolinski feels that Northern Michigan musical talent is so potent he can pull in the best of the best, mix and match musicians and create super strong sound for every CD he produces, thereby propelling people far in the musical world. It’s a model not unlike another Michigan recording studio: Motown and its legendary house musicians. Wolinski’s dream is big and his house is not, so the studio has expanded to fill the entire home. In this way, too, the Motown analogy fits—the famed Detroit recording studio started out of a house.

On a day last summer, in a cozy den in the Northern Michigan home, Wolinski is settled in for work. He wears shorts and a button-down short-sleeve shirt and sits back in a black, mesh swivel chair with his hands behind his head. He glances back and forth between the sound-wave squiggles skittering across his desktop monitor and Kenny Olson, his longtime friend and past lead guitarist of twelve years for Michigan’s own Kid Rock. Olson sits on an antique dining room chair laying down bright bluesy licks on a custom red Fender Telecaster. Wolinski usually coaches from this chair, but now he’s deferring to the man in the short-billed leather cap and black T-shirt with the jumble of tattoos on his forearms, a Detroit Tigers D prominently in the center.

“Do you want to go with that one?” Wolinski asks as he plays back the riff. Olson hears something subtle that he’d like to change and opts to play another take.

Olson has shared studios with Chaka Khan and Sheryl Crow among several others and has won the praises of Keith Richards. Today though, he’s here “flavoring” a track for Traverse City vocalist Blake Elliott. Olson’s grittily distorted runs and volume swells weave in and out of the soaring vocals laid down earlier by Elliott, who came to Traverse City by way of Ann Arbor and has a jam-packed gigging schedule here and around the state.

Elliott’s album—to be titled Feeling Right Now—will feature musicians of many stripes on strings, horns and vocals to add depth to each track. Many of the area’s busiest musicians are just a text message away for the hard-working, gregarious and always punctual Wolinski, who has worked with most of them. For Feeling Right Now, he and Blake have enlisted the duo the Accidentals, singers E Minor and Miriam Pico, guitarist Chris Sterr and steel-guitar player Joe Wilson, among others.

Instead of being separated by a glassed-in control booth, Wolinski, Olson and Elliott are all in the same little den off the living room that serves as the nerve center of recording. Often, singers and drummers are in a small alcove separated from the control room by a bathroom. “Just don’t flush when we’re recording,” Wolinski says, laughing.

Later, when the horn section arrives, they’ll play in the living room.

Getz, E Minor and singer/songwriter John Phillips have also recently recorded albums at Chez Wolinski. Wolinski plans to start on Levi Britton’s new CD in the coming weeks, and Olson is going to record parts of an upcoming album here.

Wolinski encourages members of the blossoming local scene to help each other out with background vocals and instrumentals, strengthening each other’s recordings and résumés at the same time. Magic rises from the camaraderie of performers, he says, and being in a home setting may help the performers relax and pull their best work to the surface. The strategy is one of the most important ideas Wolinski borrowed from Motown founder Berry Gordy Jr., founder of Motown. “All of my family comes from Detroit, and the first music I was aware of was Motown,” Wolinski says.

Still, Traverse City’s Cass Road is not Detroit’s West Grand Boulevard, and 2013 is not 1963. Plus, Motown musicians shared an intoxicating sound. If there is a Traverse City sound, Wolinski says, it’s eclectic and it’s about Northern Michigan honesty.

Spiral Sound is not a label in the old school way of Motown. Musicians pay Wolinski to help them produce albums, but they keep the rights to their music. To come up with the money, musicians are turning more and more to Kickstarter, the crowd-sourcing website that allows people to advertise their projects and seek donors to fund them. That’s been a godsend for musicians looking to purchase studio time, CD packaging and artwork and the other costs that come with promoting their careers. Elliott’s Kickstarter campaign raised $10,280 to help pay Wolinski and guest musicians.

Ever the coach, Wolinski encourages his artists to use the service when booting up their albums. It not only helps them generate cash, but also helps build fan excitement. At performances or on Facebook, musicians remind people of their fundraising deadlines, and fans who kick in $5 or $100 or whatever feel they have a stake in the end product and eagerly await its release.

“It’s exciting to watch happen because you’re seeing people put their money where their mouth is,” Wolinski says. “They’re saying we believe in you, we believe in your music, we believe in your success. And what’s the common denominator amongst the musicians here [in Northern Michigan]? So much talent and so little money. So we have to help each other out.”

Even after the CDs are burned, Wolinski likes to stay with the artists who record with him, so he can help them market their music. For instance, he’s planning a trip to Los Angeles to hobnob with music industry people and convince them to listen to Traverse City artists.

From his perspective touring on the international stage, Olson believes Northern Michigan has the talent to carry Wolinski’s vision. When Olson invited music industry friends to his Traverse City wedding several years ago, he says they were impressed with the level of artistry they heard jamming at the reception in Union Street Station. “What is Traverse City, a breeding ground for amazing musicians?” he says. “There’s guys up here on every instrument that just smoke half the people out there in the big city making the big bucks.”

Nowadays, Wolinski takes every chance he gets to play tracks from his studio for his friend. A few months ago, Wolinski played a raw, unaccompanied bit from Elliott. “I was like, damn. It blew my mind,” Olson says. “It’s like, Who is this? I want to meet her right now.”

Wolinski texted Blake and the three met at the Blue Tractor restaurant in Traverse City. Olson listened to more of her songs and was reminded of Marvin Gaye and Carole King. He decided to make a side trip to Traverse City during a working trip to Detroit from his current home in Nashville. One of the days he was here to help out happened to be Elliott’s 31st birthday. After recording that day, the three ended up among dozens at Left Foot Charley’s for a birthday party coinciding with the open mic session that Elliott hosts there each week—a rich moment for the Traverse City music scene and an expression of the spirit at the heart of Spiral Sound.

Wolinski, a lifelong Traverse City resident, comes to the recording business by way of performing. At age 38, he’s spent the last 25 years playing in bands and writing songs. Over a decade ago, he started recording three- and four-song demos for musicians to help them get gigs. Since then, he’s done soundtrack work for films, including Michael Moore’s Capitalism: A Love Story.

Now, the Traverse City studio is where Wolinski spends most of his time. The artists who work with him say they like his approach to recording and that he knows how to get them down to the essence of what their songs are all about. “He’s interested in the honesty and purity of the song and pushing you toward that,” says Elliott.

Ron Getz
Eclectic guitarist and well-known jazz virtuoso who has played in Traverse City for years with frequent summer tours in Europe, recently put together Suspicious to Vicious. Wolinski calls it “a revelation.”

Fundubmentals
The popular local reggae group recorded its CD Live For Today in 2012 and is now working on a follow up album.

Dave Crater
A veteran of various local groups, Crater has recorded Several Reasons, a pop-rock album of his own compositions.

David Marek
Wolinski produced soundtracks for both the feature and the trailer for Marek’s film Somewhere West.

This article and additional photos are featured in the November 2013 issue of Traverse, Northern Michigan’s Magazine. Get your copy today!
X
X