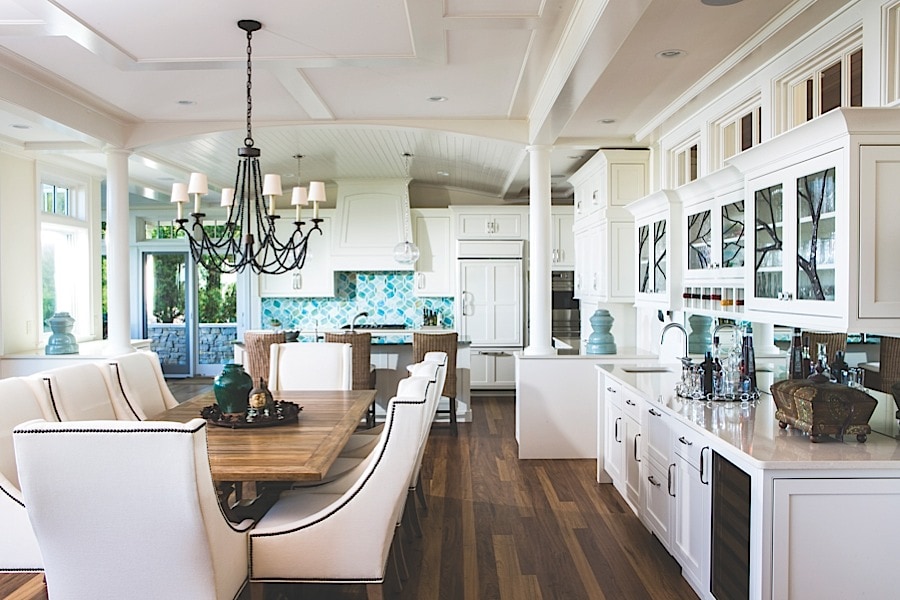 Picture a Northern Michigan Christmas dinner, perhaps in the 1960s or ’70s. The gathering is in a lovely, traditional home, in a formal dining room with a bay window overlooking Grand Traverse Bay, where lapping waves swallow falling snow. Around the long table, laden with a Christmas feast and all the trimmings, sits a large, gregarious family: grandparents, parents, three sons and a daughter—who would never forget the warmth of growing up in that house, and especially Christmas dinners in that dining room.

Flash forward nearly a half-century. The daughter and her husband own the house now. Though they both cherish memories of the 1940s colonial home and the people who had lived there, it is time to rebuild in a style more fitting with the couple’s relaxed lifestyle. Raze the old home they did, but the couple didn’t waste anything, donating appliances, bathroom fixtures, hardwood floors and windows to needy families via Freedom Builders, a local nonprofit organization. Next, Odom Reusable came to salvage anything that was left, and finally the Grand Traverse Fire Department used the structure for training.

For their new home, the couple commissioned architect Bob Cornwell to design a blueprint that would honor the old house, yet create a style that would be completely their own. It was a perfect collaboration, given that Cornwell grew up down the beach from the site and had known his client all her life.

Using a computer program that rendered ideas in 3D so that the homeowners could better envision them, Cornwell designed a long, open floor plan that is oriented around gorgeous views of Grand Traverse Bay. Tailored for casual entertaining, the layout flows from the kitchen (with its adjacent octagonal breakfast nook), through the dining room to the living area. The space is flooded with natural light and the green-blue reflection of water, which laps beyond the glass doors and the windows that stretch nearly floor to ceiling.

Like the house that preceded it, this new home is made for Northern Michigan living as well as entertaining. While the home has a formal foyer that opens straight ahead into the beautiful great room, the foyer also connects to a utilitarian hallway that parallels the great room, and ends at a mudroom/family entrance off the garage, which in turn opens to the kitchen. In effect, the hallway siphons the business-of-living traffic from the beautiful open areas on the home’s lakeside, keeping them clean, serene and clutter free.

Interior designer Kim Abbott assisted with a look that strikes a balance between beach house and town home. The Ann Sacks kitchen backsplash flashes gemlike elegance in watery blues and greens. A beadboard ceiling in the kitchen hints at cottage, while twin decorative columns flanking the open kitchen lend classic sophistication. Likewise, painted woodwork that speaks vintage cottage is a foil for a handsome mahogany-like friejo wood floor. The design work was a labor of love for Abbott, who’d done interior decorating for the homeowner’s mother in the original home. Both mother and daughter, Abbott says, “have exquisite taste.”

As a tribute to the woman who taught her style, the homeowner worked a number of her mother’s pieces into her new home, including a chair covered in one of the Asian patterns her mother adored. But the homeowner’s favorite nod to her mother was installing a mirror behind the bar in the dining room—just the way her mother had done. Given that the new dining room opens to the same Grand Traverse Bay view, that mirror reflects lifetimes of memories.

This home profile and additional photos are available in the December/January issue of Northern Home & Cottage & Traverse, Northern Michigan’s Magazine.