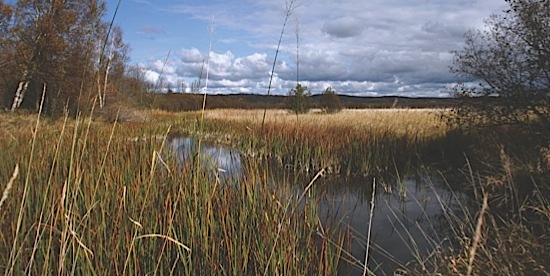 A single stalk of wild rice became the harbinger of hope this year for one Northern Michigan conservation project. In Grand Traverse Regional Land Conservancy’s latest triumph, Arcadia Marsh—located just south of Arcadia and home to one of the Great Lakes’ rarest ecosystems—was finally restored to health after decades of deterioration. The 155-acre parcel had been under siege by invasive species and degraded by human activity—creek diversion, road construction and more—dating as far back as the late 1800s. Coastal marshes are crucial to the Great Lakes’ health—they’re as productive as tropical rainforests when it comes to biomass per acre—so saving Arcadia Marsh, one of just 17 remaining coastal marshes on the eastern side of Lake Michigan, was imperative, says GTRLC’s Jennifer Jay.

The three-year project, aided by environmental groups and municipal departments, included a prescribed burn to decimate invasive vegetation, restoration of a historic creek, and orchestrating new habitat for native birds, fish, waterfowl and plants. And that stalk of wild rice? When it appeared one day—the wild rice, long a state-threatened species—it was clear that Arcadia Marsh was finally back on track.

Though major restoration work is complete, the Arcadia Marsh project is far from finished. Next steps include acquiring adjacent properties and establishing a universally accessible system of trails and bridges, allowing the marsh to be both secure and accessible for future generations to enjoy. gtrlc.org.