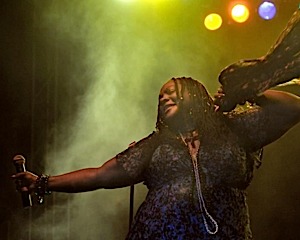 Northern Michigan Events: Detroit’s always been known as a melting pot for music—From jazz titans Hank, Elvin and Thad Jones and Kenny Burrell and Ron Carter to Iggy Pop to Was (Not Was). Gospel from the Winans, rap from Eminem, r&b from Aretha Franklin and the Motown artists, pop and rock from the likes of Mitch Ryder to Madonna. Thornetta Davis is a proud disciple of that cross-genre heritage. “It’s a blessing to be a part of the music scene here,” she said. Davis performs at the Freshwater Gallery in Boyne City on Friday, October 4.

Her inspirations run the gamut, from Gladys Knight and the Supremes (“They looked so pretty!”) to Etta James, Koko Taylor, and Bill Withers, of whom she says, “He’s one of my favorite inspirations.” She’s recorded and performed with Kid Rock and recorded a holiday album. She spans the blues, funk and rock in her shows, including her upcoming Northern Michigan gig at Freshwater Gallery Friday Oct. 4.

After years of working with others and under band names such as Big Chief and the Chisel Brothers featuring Girl Thornetta, Davis decided to make the jump to solo artist. She began putting her name on the marquee after recording her first solo album in 1996. “After two years with the Chisel Brothers, I decided to go solo when I got signed to Sub Pop,” she said. “Now it’s the Thornetta Davis band.”

The band, at least for the Boyne City show, will consist of Davis with guitarist Mike Smith and her husband, James “Jamalot Indeed” Anderson on percussion. But while it’s billed as an acoustic blues show, Davis says she’ll continue to mix and match genres. “I don’t even write a set list half the time,” she said.

That mix-and-match approach is apparent on her albums as well. Rock, funk, jazz and blues are all represented, whether on material written exclusively for her recordings or tunes Davis sings made famous by other artists. Sunday Morning and Shout Out boasted original tunes, while her album Covered Live featured music made famous by the likes of Mitch Ryder and the Isley Brothers. She promises material from those albums in her Northern Michigan show. Throw in some classic blues and rock favorites and it’s likely many of the tunes will be familiar. And for those that aren’t, Davis promises you’ll like those as well.