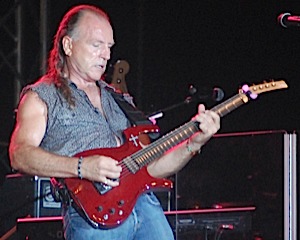 Northern Michigan Events: For most people, the musical connotation of “funk” conjures up images of the Gap Band, Parliament/Funkadelic, the Brothers Johnson or the like: African-American music with a heavy bass beat. But Mark Farner, of Grand Funk Railroad fame, says what he calls “the Flint funk factor” gives his music a different kind of edge with a heavy rock backbeat. Farner and his band perform at the Odawa Casino in Petoskey, Saturday, October 5.

And Farner should know. As the lead guitarist, vocalist, and songwriter for the chart-topping rock band Grand Funk Railroad, he and his Flint cohorts Don Brewer and Mel Schacher created a hard rock sound with songs like “Heartbreaker” and “Footstompin’ Music.” The addition of fellow Flintite Craig Frost added a new sheen to the sound, resulting in “We’re An American Band” and “The Loco-Motion” topping the charts.

Of course, that was then. These days Farner heads up his own band, playing hits from his days with Grand Funk, material from his Christian music days (which he calls “God rock”), and new material. Farner and his band perform at the Odawa Casino in Petoskey, Saturday, Oct. 5. He’ll bring back those days of Grand Funk as well as his newest song, “Take You Out,” available on iTunes, CDBaby and through his own website. Farner says the changes such as computer downloading and the ability to collaborate at a distance have enabled him to continue to pursue a musical career less expensively than when he first became famous.

“You have the ability to have ideas and exchange them long distance by way of the cloud,” he said, almost wonderingly. “You can do video, video editing, and not have to be there. With the person doing the playing. It’s a little interpersonal, but I can close my eyes and imagine pretty well.”

For “Take You Out,” Farner interspersed concert footage with footage from this area (he lives in Petoskey). “The guys that made it are from Windsor. We had some footage shot here in Northern Michigan and from a couple live shows, one in Alabama and one in Atlantic City.”

Farner is a solo artist today because he was in effect fired from Grand Funk. The group, like so many others, had its ups and downs, and first broke up in the early 80s. But also like so many groups, they got back together again, though the mid-90s reunion lasted but a couple years. Farner signed an agreement he says was presented to him by Brewer that stripped him of his voting rights within the Grand Funk corporation, leading to his leaving the group for good in 1998.

“As a shareholder I can still sit and listen. Then I’d suggest ‘Why don’t we bury the hatchet,’ but that hasn’t been met with any enthusiasm. I wanted the Beatles to get back together on that stage, and that’s what the (Grand Funk) fans want,” he said.

Farner acknowledges that he’s prohibited from touring as Grand Funk, as there is a band of that name with Brewer, Schacher, singer Max Carl, former Kiss guitarist Bruce Kulick and keyboard player Tim Cashion. So with the chances of reuniting with Brewer and Schacher dim, he’s assembled his own band with old Flint cohort Rick Baker on keyboards, Hubert “H-Bomb” Crawford on drums, and Lawrence Buckner on bass. And he says his group still has the tightness and togetherness that makes it fun to play and makes the music come alive. “We all love each other,” he said. “Any band that cares the way we do is going to play tight – it shows up,” Farner said. “It’s the Flint funk factor.”

Click to purchase tickets for Mark Farner at Odawa Casino in Petoskey.