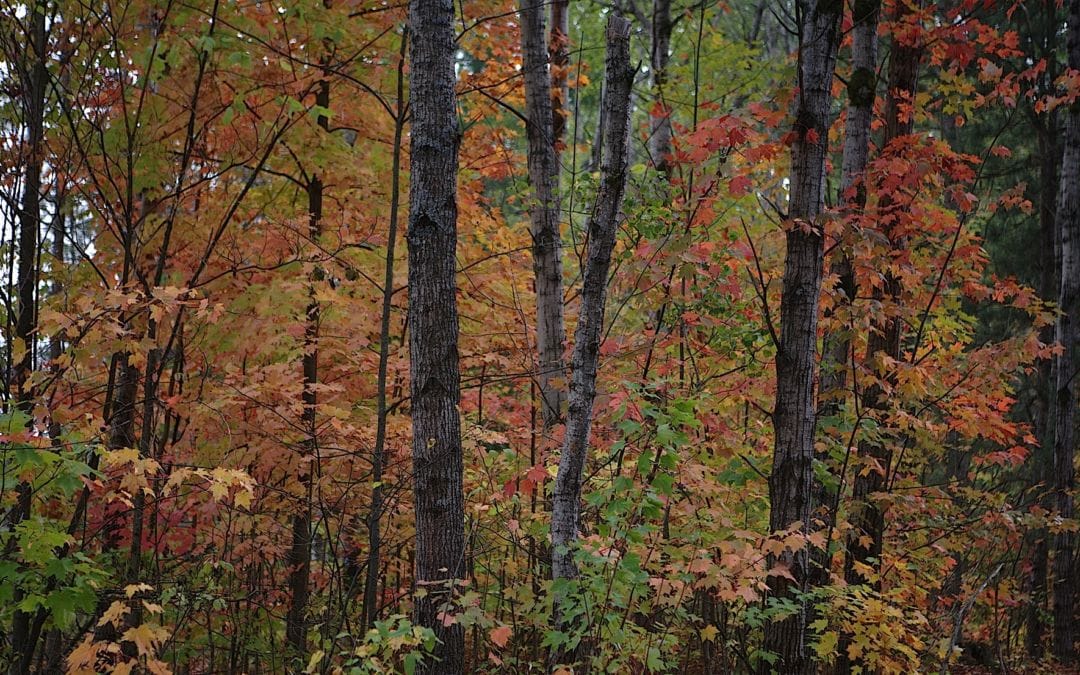 I could hear voices rising and falling in the valley. A call and response of father and sons, of branches and downed limbs dragging across the Northern Michigan forest floor.

I grew up in a city. It’s easy sometimes to forget, being a girl who loves creaking screen doors, coyote cries, rich smells of hayed fields and forests turning inward for the season. Some moments though, still prove I was raised three hours south of here, on a street where every backyard was the same size square and “adventures” mostly happened on store-bought swing sets.

Like, for example, the day almost six years ago when my kids announced they were planning to build a fort. My mind immediately went to hammers, nails, trips to the lumberyard. By the time I’d finished creating a mental checklist of construction supplies, my sons were disappearing, empty-handed, into the woods behind our house.

“Did you change your minds?” I called, leaning in the doorframe. They looked at me, then at each other.

“We have everything we need,” my first-born replied, pulling up the hood on his sweatshirt. I remember this because only months before, we’d had to double roll the blue fleece sleeves on a cold beach night. But in this moment, I could see a patch of skin just above his wrist as he reached up.

His brother, only three at the time, scooped up an armful of leaves—yellow birch, red maple, burgundy sumac, brown ash—and tossed them at me, giggling.

It wasn’t long before my husband walked the same worn Northern Michigan path between wild raspberry patches and clumps of poison ivy into the woods. Soon after, I could hear voices rising and falling in the valley. A call and response of father and sons, of branches and downed limbs dragging across the forest floor.

I waited until the sun started slipping between trees before following to see their handiwork. In truth, I expected a pile of sticks. Maybe a lopsided teepee. What I found? A work of art we’ve come to map our years by, a deadwood fort so much a part of its landscape it’s easy to believe my daughter’s current theory: fairies built it as a shrine to the trees. She was not yet born the day our fort was constructed, but perhaps she senses best of all what magic exists there.

As my three boys stood back admiring their work, I snuck past and slipped inside the cedar curtain door. Slants of light poured in from vertical slits between limbs. Two half-chopped logs sat in the middle of the fort’s floor. A spider dangled from clear silk in the corner. The floor, a carefully laid bed of crackling leaves, sprang back against my bare feet. The ground was still just warm enough to skip the shoes.

“What do you think?” my husband asked as he ducked inside. I can’t recall what I answered, but I do know we held hands. Our roots dove deeper into Northern Michigan soil. Our children claimed a space of their own.

Every season here is defined by nature—the lake in the summer, muddy fields of spring, winter’s white-blanketed hills. For me, fall is about the forest. Not for the obvious reason—the 1970s patchwork of color we all admire—but because the fort calls to my children during this time, no matter how old they get. In the beginning, the boys played there daily. Even as our eldest grew into sports and friends and other interests, he returned each fall to the fort, helping his brother repair, renovate, restore it. Now, with our daughter’s own labor of love nearby—a fairy garden full of swings, ladders, paths and tiny forts—the boys still disappear, together, empty-handed and full of plans.

Maybe that’s the thing about raising a family in a place so connected with the rhythm of nature. It’s easy for me to pull memories into being, to see the smaller versions of my children, their chubby limbs, dirt streaked faces, tiny voices; even as I watch them now, see the people they’ve become, walking away down the path; even as I remember how I would tuck a fallen leaf into the fort to mark their heights, knowing they wouldn’t hold still for such sentimental silliness anymore. Because we still gather in our backyard woods as cold winds breeze through and bird songs are replaced by geese honking as they pass above, their compasses pointed south.

To sit in a child’s fort in autumn is to feel the finite nature of things. The trees gone bare. The woods gone quiet. We are older, and we want to hold on to childhood as it, and time, slips through our fingers. Or perhaps it’s much more simple. Just the love of a good fort, built with our bare hands, on a blue sky Northern Michigan autumn day.

See this article featured in the October 2013 issue of Traverse, Northern Michigan’s Magazine. Get your copy today!
X
X