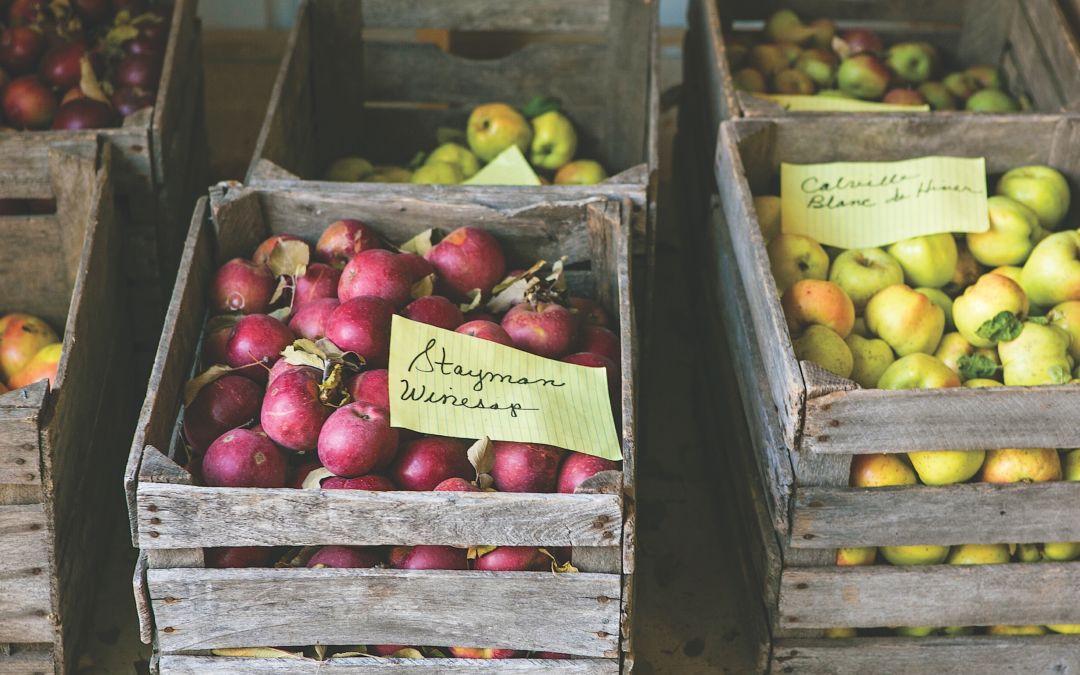 The heirloom apple sampler at Northport’s Kilcherman’s Christmas Cove Farm is a fantastic Northern Michigan food find with apples for every taste. You can find Kilcherman’s at 11573 N. Kilcherman Rd, north of Northport. Take a lovely fall drive and pick your favorite!

The apples at Kilcherman’s Christmas Cove Farm come in a variety of shapes, sizes, colors and flavors. Some are the size of a softball, others the size of small limes. They’re red, green, yellow and variegated, some with a waxy skin, others with a rough peel.

Below are 10 varieties with curious backstories and captivating flavor.

Snow Apple
A small red apple with some green. One of the oldest varieties on the farm, it dates from 1600. Originally from France, its flesh is indeed white as snow.

Tolman Sweet
A small green apple first described in 1822 in Massachusetts. It is thought to be a combination of Old Russet and Sweet Greening.

Beacon
A small variegated red and yellow apple. The first seed was planted in 1908 and was propagated at the University of Minnesota.

Spitzenburg
A small tart and juicy apple first found in Esopus, New York, in the 18th century. Thomas Jefferson grew them at Monticello.

Lady Apple
A tiny green apple with red highlights, it dates back to the time of Christ. It is thought to be the oldest apple variety in existence. It is often used as a decoration in holiday wreaths, and thus is also known as the Christmas apple.

Bread & Cheese
A large green-with-red apple dating back to 1804, it nicely complements bread and cheese, hence the name.

Winter Banana
A squat, medium-sized red and yellow apple with a waxy peel. It originated in 1876 near the town of Adamsboro in Indiana. And yes, its flavor has hints of banana.

Macoun
One of the most flavorful apples, mildly sweet and juicy. It is a cross between the McIntosh and Jersey Black.

Golden Russet
A small apple with a brownish, leathery peel (the russeting). Very sweet, as are most of?the russets.