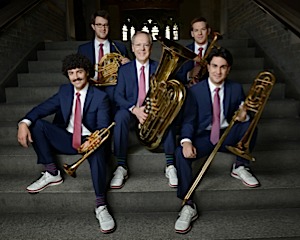 Northern Michigan Music: For trumpet player Caleb Hudson, joining the award-winning Canadian Brass was something wholly unexpected. The newest member of the group is a 2012 graduate of the Julliard school, and before that attended Interlochen Arts Camp and then graduated from Interlochen Arts Academy. “I got a call from (fellow trumpeter) Chris Colletti, asking if I wanted to come over and play some duets. It was a fun day to hang out with a friend,” said Hudson from his home in New York.

But it was much more than that. “It turned out to be sort of a screening process,” said Hudson. “Then I got a call from Chris, saying the others wanted to meet and play, there were changes taking place (in the group). It just evolved.”

Let that be a lesson. When a friend wants you to come over and play, it just might be a job audition.

“It was pretty surreal,” said Hudson. “Every young brass player grows up listening to the Canadian Brass, fantasizing about what it would be like to be part of the group. It’s overwhelming, humbling, exciting.”

The group, which will appear at the City Opera House Sept. 15, is currently comprised of four young players – Hudson, Colletti, trombonist Achilles Liarmakopoulos, and French horn player Eric Reed – alongside the senior member of the group, tuba player Chuck Daellenbach. Daellenbach and his friend, trombonist Gene Watts, first came together in 1970 to form a brass quintet.

Back then, the concept was brand new. There was not much of a repertoire for a brass quintet, but the Canadian Brass has changed all that,  creating their own musical world by transcribing, arranging and commissioning more than 200 works. The music transcends genres, as it includes the works of Renaissance and Baroque masters, classical pieces, marches, holiday favorites, ragtime, Dixieland, Latin, jazz, big band, Broadway and Christian music, as well as popular songs and standards.

The Canadian brass now boasts a discography of over 100 albums and an extensive world-wide touring schedule. Over the course of the group’s 40+ years, it has sold well over 2 million albums worldwide, and performed across the globe.

“Chuck always talks about how when they started in the 70s there was no brass quintet music. They basically had to create that for themselves,” said Hudson. By the time Hudson came along, the concept of a brass quintet had become a standard, with other such groups performing at levels from professional to high school. And the Canadian Brass were still leaders in the field they had created. “When I started playing, the Canadian Brass was one of the premier brass quintets in the world,” he said.

Hudson says one of the keys to the group’s longevity is the camaraderie. “It’s a great group, we love hanging out together,” he said. Another is the ability to subsume their individuality into the group sound. “It’s not about the individual members of the group. It’s about the sound, the purpose of the group,” he said.

Hudson says his time at Interlochen served him very well for his career. He learned discipline, which he says he still applies to his daily musical life. “It’s important to always find time to spend some quality time with the instrument. It can be difficult on the road – you don’t have two or three hours every day in a practice room. So you have to be flexible with the time you do have.” Interlochen provided him with another benefit – it’s where he met his wife Amanda, a fellow musician.

While he’s the newest member of the Canadian Brass, that is far from his only musical outlet. He keeps busy on several fronts. “I play a little jazz here and there in a big band, with a Carnegie Hall group The Academy, teach once a week at a local high school. I love to play and be a part of the community,” Hudson said. An avid baroque musician, he also performs with period ensembles such as Philharmonia Baroque, American Bach Soloists, The American Classical Orchestra, Concert Royal and the Trinity Baroque Orchestra.

“Amanda and I are excited about this concert,” Hudson said. “Interlochen was such an important part of my growth. It was the most creative, nurturing atmosphere I’ve ever experienced.”

The Canadian Brass performs Sunday, Sept. 15 at 3 p.m. Tickets for the show at the City Opera House are available by contacting the box office at (231) 941-8082 or visit online at CityOperaHouse.org.