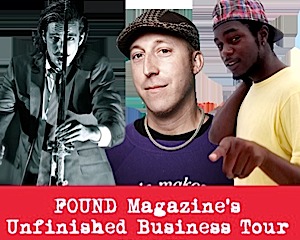 Traverse City Events: Davy Rothbart is a national best-selling author, frequent This American Life contributor and creator of FOUND Magazine, which publishes collections of reader-submitted found objects from across the country. On Thursday, September 19, Rothbart will appear at the InsideOut Gallery with Brooklyn-based DJ Mikah Tha Vipah and renowned sword-swallower Brett Loudermilk as part of a 20-stop national tour celebrating the paperback release of Rothbart's acclaimed essay collection My Heart is an Idiot. The book has won rave reviews from The New York Times, the New Yorker and the Daily Beast, as well as authors including David Sedaris, Dave Eggers and Elizabeth Gilbert.

Ahead of his Traverse City visit, the Michigan native spoke with MyNorth about the inspiration behind his humorous essays on “misadventures in love,” the prank resume he once used to win over the producers of This American Life, and the strangest item he ever received at FOUND which just so happened to come from Traverse City.

MyNorth: Let's start by talking about FOUND. What was the inspiration behind the magazine?

Davy Rothbart: FOUND is a collection of notes, letters, journal entries, photos and other items people have found on the ground or in the street across the country. It started when I was living in Chicago (in 2000), and I found a note on my car windshield written to “Mario.” It read: “Mario, I f***ing hate you. You said you had to work then why's your car here at her place?? You're a f***ing liar. I hate you. I f***ing hate you. Amber. PS: Page me later.” Obviously, I wasn't Mario and Amber had the wrong car, but I thought that was such an amazing note. There are all these complicated emotions going on. That PS? Man. I thought it was great that there was so much story you could glean from something little like that.

I started showing that note to people, and people had great finds of their own to share with me in response. Normally these are things people keep on their fridge, but I wanted everyone to have a chance to see them. I thought a magazine would be a great way to do that. I didn't start with any grand ambitions … but now we get 10-20 items a day, maybe 100 a week. I never dreamed so many people would share my fascination with these little glimpses into other people's lives. It's a gigantic community art project, and I thought the best way to spread the word about it was to take the show on the road and share the magic of the finds.

MyNorth: What's an example of a memorable or unusual find you've received?

Davy Rothbart: The weirdest find is actually one that came from Traverse City, in 2004 I think it was. It was a small jar filled with formaldehyde, and inside it contained a sea lamprey. Taped to the lid was a Post-it note that read: “Flaky and self-conscious.” (laughs) I've never been able to figure that one out.

MyNorth: Switching gears, how did you come to be involved with This American Life?

Davy Rothbart: I was always a fan of the show. Thirteen years ago, when it was early in its life, they had a job available as a radio producer. I was totally unqualified for it, but my friend encouraged me to apply anyway. I wrote a nice cover letter about my love of storytelling, but then, as a joke, I submitted a completely honest resume. It had things like how I was a pizza delivery guy in Ann Arbor for seven years, how I scalped tickets in Chicago. “Marijuana salesman,” that was one. I made it look very professional and sent it in.

Three days later, there was a message from Ira Glass saying they wanted to interview me for the show. I didn't get the job, but they liked some of the story ideas I had. It was the best-case scenario. Maybe every six months or once a year I've been able to do stories for them. I've also gone on some of their tours, with Ira Glass and David Sedaris and those guys. I've had such a blast and have learned so much about storytelling from being able to work with my heroes like that.

MyNorth: Before writing My Heart is an Idiot, you released a fiction collection (The Lone Surfer of Montana, Kansas). Why did you decide to switch to nonfiction? And did you decide on the “misadventures in love” theme upfront, or did that emerge over the course of your writing?

Davy Rothbart: The theme did emerge in a weird way through writing. I'd been sharing people's most private thoughts in FOUND, and I thought it was the least I could do to open myself up in the same way. I had written an essay for GQ called “What Are You Wearing?” about a phone-sex relationship I had, and the reception of that emboldened me to explore other stories from my life. About half of the stories in the book are about my misadventures in love and the other half are about interesting people I've met on the road. For example, I picked up a hitchhiker on the way to Grand Canyon who was in his 60s and had always dreamed of seeing the canyon. So I got to be there to witness that moment, and it was miraculous.

I also met a guy selling hip-hop CDs outside of a bar one time, and his dream was to move to Canada and become a DJ. Hakim was his name. We stayed in touch—he's in the essay “Canada or Bust” and now it's exciting because he's coming on tour with us. So it's been fun to share these raw and personal stories and have people share their stories with me in return.

MyNorth: Given your proclivity for storytelling, are you able to enjoy experiences in the moment? Or do you find yourself thinking, “This would make a great story,” and focusing on that instead?

Davy Rothbart: Experiencing something fully in the moment is the best way to report it. The more aware you are, the more likely you'll be able to recall it accurately later. But I don't force those things. I jump into experiences for the sake of the experience, and then often discover later that it makes a great story.

MyNorth: Have you always had this deep curiosity about other people? Is that a trait you recommend writers cultivate?

Davy Rothbart: I've always had it. I think it comes from my parents. My dad is a gregarious guy, the type who's never met a stranger. My mom is a meditation teacher and counselor who channels an ancient Buddhist spirit named Aaron to advise people. She's always had people coming to her for counseling. And, she's also deaf. So when I was a kid, people would call with these serious issues: getting divorced after 20 years, a kid running away from home. And I would translate the calls for my mom. Hearing these emotional stories from people when I was 8, 9 years old—that made a big impact on me.

MyNorth: Tell us what audiences are in store for Thursday night at your Traverse City appearance at the InsideOut Gallery.

Davy Rothbart: Oh, you know—it's just your regular rowdy, energetic reading and music extravaganza with a sword swallower. (laughs) It's not an ordinary reading, I'll say that. Hopefully people will leave feeling inspired and exhilarated and maybe seeing the world in a different way. I can promise that people will laugh a ton, and maybe cry a little.

FOUND Magazine's Unfinished Business Tour 20/13 – featuring Davy Rothbart, DJ Mikah Tha Vipah and Brett Loudermilk—will stop at the InsideOut Gallery on Thursday, September 19, at 8:00 p.m. (doors at 7 p.m.). Tickets are $5 for general admission or $15 for a package that includes general admission, a paperback copy of "My Heart is an Idiot" and a This American Life CD. The show is open to all ages, but recommended for mature audiences. Advance ticket sales are recommended.