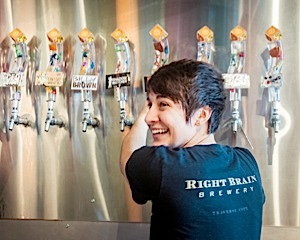 Traverse City Microbrews: Organizers of the new Traverse City Beer Week say they have no intention of starting yet another beer festival in this Lake Michigan resort town.

Instead, they’re aiming at something completely different: a decentralized and fairly low-key celebration of craft brewing where the focus is on breweries and restaurants, not a music-centered social event in which the beer is simply a sideline.

“Traverse City Beer Week will help restaurants, bars, and retail locations to do what they do well even better,” says Ann Drummond, marketing and public relations with Imperial Beverage. “It’s not intended to pull consumers away from the places where craft beer is already appreciated. Instead, these events are fashioned for the sole purpose of craft beer appreciation, consumer education, and experiential learning in the breweries, brewpubs, restaurants and retail locations of Traverse City.”

Imperial Beverage, named Craft Beer Distributor of the Year in 2010,  used the same model to create a successful Beer Week in Kalamazoo two years ago. The idea is not to organize a festival at all, she says, but to give local breweries and restaurants a chance to host their own events on their own premises while promoting closer relationships among brewers, chefs and retailers who sell craft beer.

For instance, a brewery or restaurant could schedule a “special release” tasting with a presentation by the brewer or a “vertical tasting” where participants can taste examples of the same beer from a series of consecutive release years. Or a restaurant could hold a workshop on how to pair beers with food, presentations on home brewing, tastings of special seasonal brews, cheese/beer pairings, and cooking demonstrations where beer is a featured ingredient in the recipe.
A small community with slightly more than 15,000 residents, Traverse City is best known as a four-season outdoor adventure destination with a lively culinary and wine scene, but more recently it has suddenly emerged as a major center of craft brewing. (Draft magazine has named it one of Americas’ three “emerging beer towns” — along with St. Louis and Oklahoma City – and The Travel Channel listed it among the Top Seven Beer Destinations in North America.

Today the area boasts 11 microbreweries, brewpubs and craft brew taprooms – three of them added in the past year – with four more scheduled to open this fall.

And although some Traverse City area breweries are represented by Imperial Beverage, the company is inviting all craft brewers and restaurants to participate, regardless of their affiliation.

One enthusiastic participant is Short’s Brewing Company of Bellaire – recently listed as the country’s fastest-growing beverage company. Short’s will be featured during Beer Week’s opening night event: a Pub Crawl featuring six Traverse City venues.  Participants in the “crawl” will receive a passport to be presented at each location; completed passports can be traded in for an official Traverse City Beer Week t-shirt.

Every event in Traverse City Beer Week – scheduled for Nov. 9-15 – must feature truly craft beer (“No wolves in sheep’s clothing!” says Drummond) and include a presentation by the host brewery or brewery representative. That’s one reason why the Traverse City Convention & Visitors Bureau sees it as a positive move, adds Bureau president Brad Van Dommelen.

“This is a good opportunity for Traverse City to promote its growing craft beer culture, which is really at the heart of this event,” said Van Dommelen. “But we also see this as a way to create some new activity in a season that’s traditionally slow for this community.”

Get more Northern Michigan brews in the MyNorth Restaurant Guide