The Village of Walloon Lake Develops Downtown with Dialogue and Care 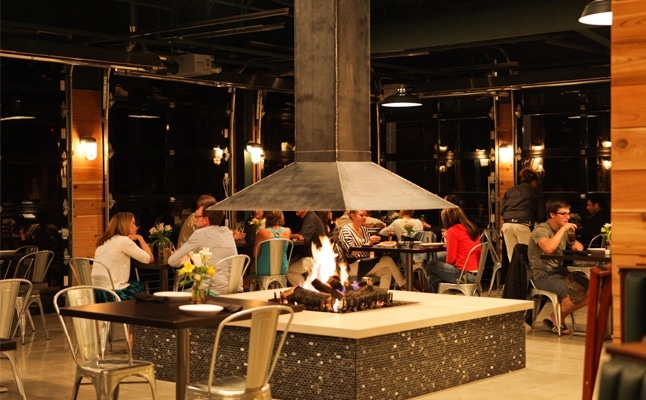 The Village of Walloon Lake knew something needed to be done about the heart of the village. The once thriving small town center had sunk into disrepair and abandoned buildings. Years of controversy about what to do gave way to developers with a keen ear for what the community wanted and the desire to develop with the best of Walloon in mind. Meet the Borisch family.

Step One: An end to controversy

Before the Borisch plan, before Barrel Back Restaurant, controversy for nearly a decade brewed over developing the property at the heart of the Village, at the lakefront beside M-75. In the 1970s, it bustled as a multi-functioning hub with marinas, an ice cream shop, a general store and a post office, plus a well-known and -loved public beach and swimming area. By the 1980s, the Village began to decline, its descent marked by vacant lots and burned-down buildings. During the next 20 years, efforts to revitalize the Village remained unrealized.

Jonathan Borisch founded Walloon Development, LLC and approached Melrose Township with a third proposal. Matt Borisch joined the development project as owner of the property’s businesses and buildings. The two Borisch men had already partnered from 1994 to 2010, when they operated Borisch Manufacturing Corporation, a Grand Rapids electronics manufacturing company, before selling it to Amphenol Corporation and forming present-day Amphenol Borisch Technologies. “Everyone had a vision for the village but not one that the community embraced too much,” Matt Borisch says today. “One of the things that was missing from the Village plans of past developers was access to the lake. People want to see it, and building things in front of that access didn’t quite fit.”

During Jonathan Borisch’s initial meeting at Melrose Township Hall, he first asked what the community wanted from his project. When township officials suggested preserving space for people to enjoy Walloon Lake, Jonathan Borisch offered to make a public park. “What more can you ask for?” says Randy Frykberg, Melrose Township zoning administrator and planner. “It was unbelievable, and then he went ahead and did it. It just started on the right foot, and it’s kept right on that path.” The lakefront green space now has a gazebo, trees, benches, picnic tables and a sprinkler system. A three-paneled display in the park outlines the Walloon Lake story, past and present, with fishing maps, information about invasive species, and notes about Ernest Hemingway’s childhood summer home on the lake.

Jonathan Borisch grew up in the Village of Walloon Lake during the area’s glory days in the ‘60s and ‘70s, when kids frequently raced sailboats in the summertime and threw roaring parties on the Village marina docks afterward to celebrate. Today, Jonathan Borisch and Matt Borisch both own homes on Walloon Lake’s West Arm. They live in Grand Rapids, Mich., and spend their summers on Walloon Lake, traveling back to Northern Michigan on weekends during the winter. “That love of Walloon Lake has been pretty much in my family from my grandfather right on through,” Matt Borisch says of his grandfather, Jonathan Borisch’s father, Thomas.

Jonathan and Matt Borisch have invested several million dollars in their Walloon Lake venture. Redeveloping the marina created a point of access for boaters as the second phase of the project. Walloon Village Marina now offers expanded dock space with a gas dock, complete with boat handlers for days when the wind whips up, as well as boat services and a retail showroom.

Next to the park, the lower level of a reconstructed lakeside building that was once Si’s Marine now houses Tommy’s, an esteemed waterskiing and wakeboarding pro shop based in Golden, Colo. The pro shop recently won the Water Sports Industry Association’s 2013 Retailer of the Year Award. Above, Barrel Back Restaurant bustles as the third active component of the Borisch plan.

Matt Borisch had never been in the restaurant business and didn’t want to be. Then a friend encouraged him to change his mind. “The Village needed a restaurant,” he says. “Because nobody else would do it, you get what you get, so we just decided to start one.”

Barrel Back Restaurant’s namesake refers to the iconic, curved barrel backs of classic wooden boats that cruised Walloon Lake in the 1930s, ‘40s and ‘50s, and still do today. Jonathan Borisch and Matt Borisch both own Chris Craft boats with the barrel back design, and Matt Borisch keeps his 1942 Chris Craft, a 26-foot runabout, at a private dock in front of the restaurant.

(WATCH: An August evening at Barrel Back Restaurant.)

The restaurant didn’t advertise much for its grand opening June 10, 2013, but nearly 500 diners arrived in droves at the restaurant that evening. “It was pretty wild and we held our own until about 8 p.m., and then the train came off the tracks about as good as it could,” Banfield, 32, says of the Monday début. “We said at one point, ‘We just can’t do anymore.’ We kind of just stopped.” With no way to continue taking orders, the wait staff halted service. Banfield went table-to-table and personally apologized to diners, handing out gift certificates.

Matt Borisch says everybody grew from that overwhelming night. “Oh well,” Matt Borisch says. “It was a struggle, but I think a lot of people who had never opened a restaurant, myself included, learned a whole bunch from that day.”

Banfield pauses thoughtfully when considering what makes Barrel Back Restaurant unique given his extensive hospitality experience, which includes the Bay Harbor Yacht Club and Stafford’s Perry Hotel. Then he recognizes the team they’ve built this summer. “The building is beautiful and the setting is beautiful, but without everything else it just doesn’t work,” he says. “People make the experience.”

Stepping across the street

Several new storefronts on the other side of the road face steps one, two and three of the Borisch development plan. The retail lineup includes two historic homes (both saved from bulldozing and moved into town) that were converted into Vintige, an art and photo gallery that also carries handcrafted jewelry, and The Painted Cottage, an antique shop. Beside these cottages, KLK, an interior architecture and design company, and Kidd & Leavy Real Estate will lease offices in a retail building that is still under construction. Next door, six petite, red-roofed kiosks showcase local artists’ and entrepreneurs’ work. Johan’s Bakery, based in Petoskey, opened Johan’s Pastry Shop of Walloon Lake to serve baked sweets and ice cream next to the kiosks. The building once housed the Village post office, which is now down the street.

While Barrel Back Restaurant faced the challenge of serving about 500 people each day during the summer, wait times for a table escalated to an hour and a half almost every night. This particular growing pain of the restaurant gave people an opportunity to visit the new storefronts across the street while waiting for a table.

At the kiosks one August evening, jewelry maker Denise McCutcheon laughs, saying she’ll stay in her kiosk until it starts snowing, if she doesn’t freeze to death first. Frog Hollow Farm owner Emily Paquette points out that as she builds her Boyne City farm into a food and wine destination, her kiosk provides a permanent place to build a presence and a brand, versus four hours each time she participates in a farmers market during the summer. “We took one of those kiosks so we were visible down in the village this summer,” says Pam Roudi, president of the Walloon Lake Association, noting the opportunity to engage with the community and talk about the lake’s environmental issues.

Roudi adds that the Walloon Lake Association doesn’t anticipate environmental issues due to the development, and she thinks any problems that do arise will be quickly solved. “They’ve had a willingness to work with all the different government entities, both land and marine entities, to go about doing things within the ordinances of the township,” she says.

Well known as an institution in the Village since the late 1800s, the Walloon Village General Store survived two fires and supported itself throughout Walloon’s economic decline. Although Linda Penfold and her husband Calvin have owned the storefront and expanded services for the past 15 years, several people waltzed into their office to check on them throughout the summer, voicing concerns over the development: “Are you okay?” they asked. “What has this done to you?”

Linda Penfold’s answer: “If the summer’s warm and it’s hot, the people are coming, and I mean, they’re coming.”

Linda Penfold says business was good for the general store throughout the construction phase and into the summer, when Barrel Back Restaurant diners perused the storefront while waiting for a table. Joking with the Borisch family, she asks what they’re going to do next. “I really enjoyed the construction,” she says. “On any given day, depending on who was here, you could have between 20 and 40 guys coming in for lunch.”

Acknowledging that more than 100 jobs were created for summer 2013, Matt Borisch says he is eager to learn what it would take for the Village economy to support 200 jobs. “You can imagine that this is not a philanthropic effort. The businesses have to make money in order to survive and employ people,” he says. “The vision for Walloon is to continue to listen to the community and figure out what they want next, and then see if we can’t figure out a way to provide that in a way that will be self-sustaining.”

Our interview comes to a close and the three men look to the waves below. Banfield and Flynn grab swim trunks, and they head downstairs to Tommy’s for paddleboards. “I spent a lot of years working in private clubs, which was a great experience, but your friends can’t come out and have a beer and meet and sit at the bar,” says 36-year-old Flynn, who previously worked at the Bay Harbor Yacht Club and Tapawingo, a four-star restaurant since closed in 2009 and located in Ellsworth. “Being in a public restaurant is fantastic. The thing that makes this place different and new and exciting to me is that it is a place everyone can come.”

Visit the Village of Walloon Lake now with this photo tour: