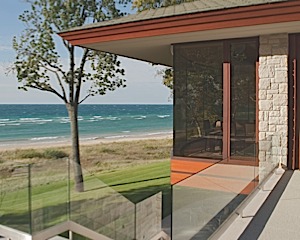 Northern Michigan Home & Cottage: In a small city, little coincidences and connections come with the territory. Those of us who have worked in Traverse City for decades, as I have, aren’t six degrees separated, or even two degrees separated; we’re more like rubbing shoulders. So it was that when I set out to interview retiring architect Bob Holdeman (“After All These Years,” p. 38 of August Northern Home & Cottage) at one of his first projects,  I learned that Holdeman started his career in the exact same office that Traverse Magazine /Northern Home & Cottage was moving out of, after a great run of 16 years. That office is in one of the beautifully preserved 19th-century buildings on downtown’s Front Street. The day I interviewed Holdeman, we (the staff of Traverse) moved our offices over to Radio Centre II on Park Street—a handsome new building that gives us street access for our new MyNorth Tickets division. Turns out, Bob was one of the designers of that building as well.

That day, too, was the sad one that we learned of the untimely death of Byran Crough—the longtime director of the city’s downtown authority who had so much to do with Traverse City becoming the powerhouse city of the North in terms of food, entertainment and architecture. Bob had worked extensively with Bryan, and it was all he could do to hold back tears.

Which brings me to this: the great design—both commercial and residential—in Traverse City isn’t the outcome of coincidence.  It comes organically out of a region blessed with talented visionary folks like Bryan, Bob and plenty of others—among them the architects and designers you may have met at the 2013 Northern Home & Cottage Tour. Gratefully, they all decided to make their homes and careers in our world-class landscape.

We are proud to showcase the work of some truly gifted designers, architects and builders, both in this issue of Northern Home & Cottage and on our annual Northern Home & Cottage Tour. If you missed this year's parade of homes last Saturday, September 7, look out for October's Ultimate Up North Kitchen Tour. Tickets are now available online at MyNorthTickets.com!