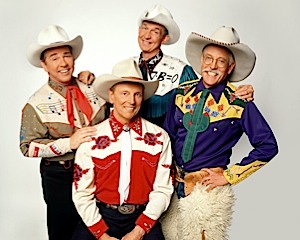 Northern Michigan Events: For Ranger Doug and his pals, things just don’t get much better than some yodeling, a couple rope tricks, and a whole lot of strumming and singing. Audiences across the country have agreed with that assessment for over 35 years. That’s how long Riders in the Sky have been performing, with an upcoming stop at Interlochen’s Kresge Auditorium Sept. 8.

Ranger Doug, Too Slim, Woody Paul, and Joey the Cowpolka King mesh their talents and their love of the music of such forebears as Roy Rogers and Tex Ritter into a show that combines comedy, nostalgia, music, and yes, a few rope tricks. “Maybe Woody will even get them right this time,” said Ranger Doug in a phone interview.

The classic cowboy quartet has chalked up over 6,100 concert appearances in all 50 states and 10 countries, appearing one night at the Nashville National Guard Armory and the next in Carnegie Hall, going from county fairs to the Hollywood Bowl. Their cowboy charisma and comedic flair made them naturals for TV, and landed them not one but two television shows: A weekly show on TNN, as well as a Saturday morning series on CBS. They have guested alongside everyone from Barney to Penn and Teller.

They’ve even made it to the big screen, albeit in an animated way: Woody from the Pixar Toy Story movies was clearly modeled on them. How do we know that? The group performed “Woody's Round Up” in Toy Story 2, with the album of the same name garnering Riders their first Grammy Award in 2001 for “Best Musical Album for Children.” Two years later, Riders roped their second Grammy in the same category, for “Monsters Inc. – Scream Factory Favorites,” the companion CD to Pixar's award-winning movie.

For those who might lump their music in with country, Ranger Doug begs to differ. While he says he enjoys old-time country-western music (as well as Count Basie – guitarist Freddie Green is a favorite), he says the kind of music he and the rest of the Riders perform is leagues away from stereotypical modern music, whether country, pop or hip hop. Their music harkens back to the country’s pioneering days, with wide-open spaces where the skies are not cloudy all day.

“We came up with the concept out of love of Gene Autry and Roy Rogers, Sons of the Pioneers. It evolved as we were growing up in the 50s,” he said. “It’s not about cheating wives or getting drunk. It’s about being cowboys and riding horses.”

The group refuses to rest on its laurels, which include all those TV appearances, the two Grammy Awards, and some 30 albums. They just recorded a new discc featuring, of all people, Wilford Brimley. “We had the opportunity to get together and make it work. He’s a wonderful guy, a fine singer,” said Doug.

After all this time, how is it that “Ranger Doug, the Idol of American Youth,” “Woody Paul, the King of the Cowboy Fiddlers,” “Too Slim, the Man of a Thousand Hats” and “Joey, the Cowpolka King,” are still together? Perhaps a better question is how a theoretical plasma physicist, a wildlife manager/galvanizer/Life Scout, an English major/shot putter/Bluegrass Boy, and a Polka Hall of Fame member would collectively become “America's Favorite Cowboys.”

The group first formed in 1977, when Ranger Doug on arch-top guitar and baritone vocals and Too Slim on bunkhouse bass and tenor vocals (and face) joined forces. Next on board was Woody Paul, and off they went. The trio subsequently rounded out their sound with the “Stomach Steinway” stylings of Joey the Cowpolka King on accordion and baritone vocals, who left for a few years, but returned after apprenticing with the late polka king Frank Yankovic. He’s recorded with everyone from Roy Rogers to U2.

That kind of versatility comes in mighty handy, according to Ranger Doug. “It’s challenging music in its way. You have to make it sound effortless and smooth. It keeps you on your toes.”