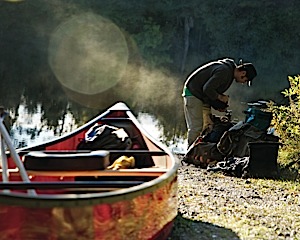 The sound of gravel crunching beneath the shuttle truck’s tires fades back up the rutted two-track, leaving my partner, Brian Kudej, and me alone with a red canoe and our thoughts about paddling the Upper Peninsula’s Tahquamenon Falls and Tahquamenon River.

Our thoughts are of coffee. Hot coffee. Late last night at my house, as we packed during a torrential rainstorm, we chucked our hastily assembled paddling and camping gear into the back of my pickup. At some point during the rain-soaked panic, my sleeping bag, stuffed anonymously in a dry bag, must have rolled into a dark corner of the garage and was left behind. I, of course, did not realize this until two hours later at a Northern Michigan state park campground at the mouth of the Tahquamenon where we hastily made camp for the night. The rain broke, stars winked out of the clearing sky—and temperatures plummeted to around freezing as I dressed in every layer I could scrounge and settled in for a fitful night.

No matter. Now, with a tin cup of cowboy joe in one hand and a cedar paddle in the other, the previous night’s tossing, turning and shivering is dissipating like the ethereal river mist before us. A scatterblast of bird song ricochets from the opposite bank as the low autumn sun splinters through the dancing fog in colors we can’t name. It’s a good day in a wild place, and we have lots of river ahead of us.

Enter the fixer. Ken Orlang is the soft-spoken proprietor of a canoe and kayak rental and shuttle service simply named The Woods. His base of operations is a shady, forested piece of property on the south side of M123 halfway between Newberry and Paradise. A beavertail canoe paddle on a steel fence post along the road marks the entrance to the deepest well of paddling information in the region. Via a series of phone conversations leading up to the trip, Ken slowly peeled back the layers of mystery that shroud access to this remote stretch of river. We settled on a two day trip of about 30 river miles beginning with a shuttle from the mouth of the river (where we dropped my truck) to a private access road about six miles upstream of the river’s main feature, the famous Northern Michigan Tahquamenon Upper Falls. We would launch into the heart of Tahquamenon Country and journey through a sampling of some of the best the Tahquamenon River has to offer. 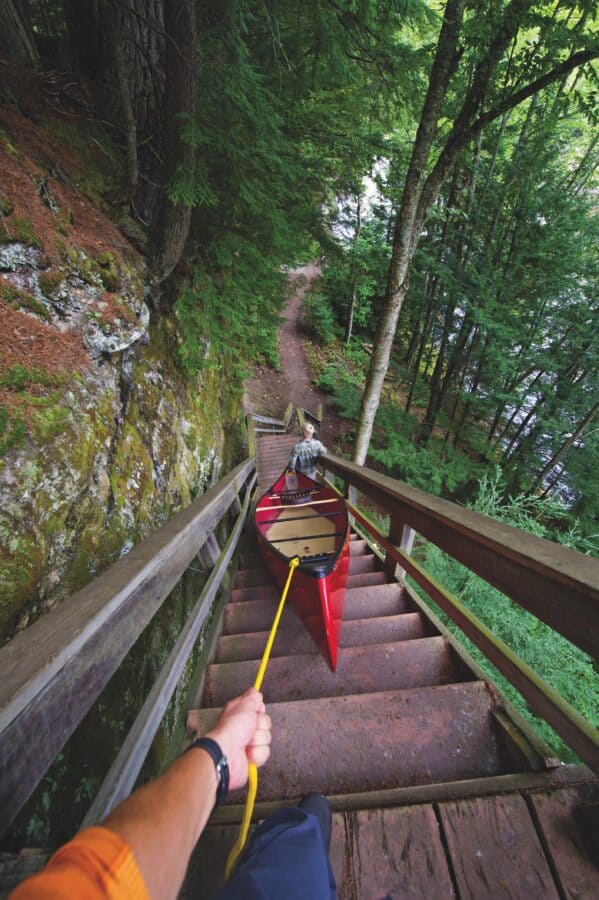 The only thing tricky about paddling Northern Michigan’s Tahquamenon is getting on and off it (well, and making sure you don’t go over the waterfalls). Highway M123 crosses the river twice—once just north of Newberry and then again nearly 60 miles downriver where it empties into Lake Superior south of the village of Paradise. Only a handful of public and private launches exist along this stretch, making it a great four- to six-day wilderness trip, but proving problematic for two dudes with jobs, kids and only a Saturday and Sunday to spend on the Northern Michigan water. The alternative is a couple of nice day-paddles upstream of Newberry, but our spirits needed more than that. 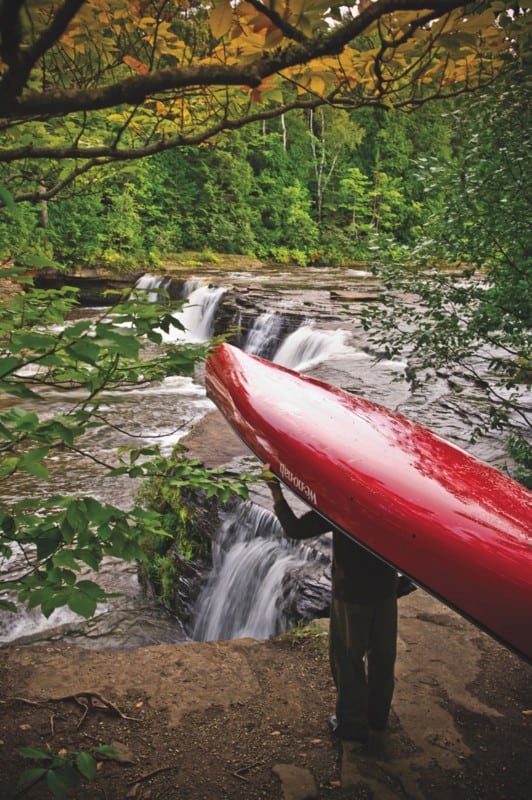 The Tahquamenon’s dark waters are a perfect mirror of the cloud-studded Upper Peninsula sky. The river pillows and slurps at the bow of our 17-foot fiberglass canoe as we find a rhythm and push relatively hard in the slow moving water. In the 150-foot-wide channel we get little help from the slight current. Paddling is more like pushing through a long lake than coursing a river. I’ve read that at some points the Tahquamenon is 60 feet deep and home to toothy alpha fish like musky. 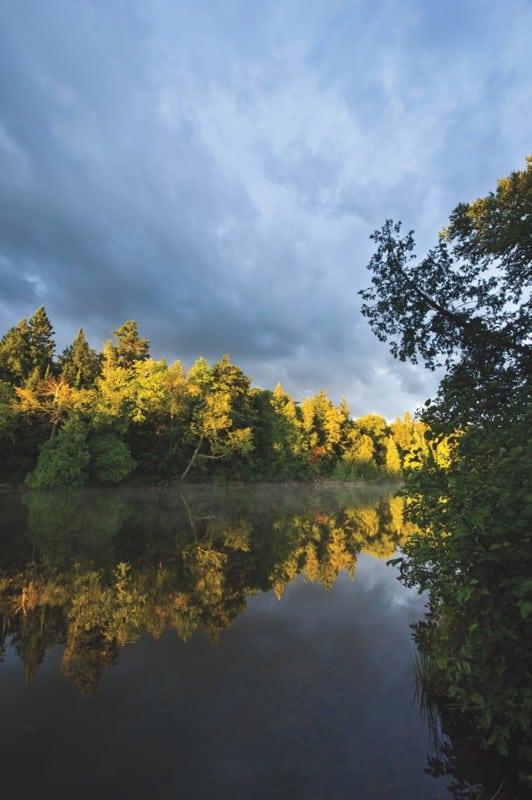 Cedar and hemlock cloak the shore, occasionally breaking open into low marshy backwaters where waterfowl are already congregating for the fall migration. The air is spicy with evergreen and heavy with the rich life-and-death perfume of the swamp. Here and there a humble cottage winks out of the trees. An aging rowboat stashed in the shadows hints of humanity, but we see no one.

We’re keeping our eyes peeled for the region’s most famous wildlife, the Northern Michigan moose. Newberry calls itself The Moose Capital of Michigan, but the vast swamp and bog country that feeds the river keeps its moose hidden during our trip. We pause as a family of otters plays hide and seek in a snarl of driftwood along the bank. They stop and turn in unison as we drift past, then huff and chuff from under an undercut bank. Sandhill cranes and great blue herons barely notice us as they feed, while ducks leapfrog ahead in explosions of quacks and flaps. 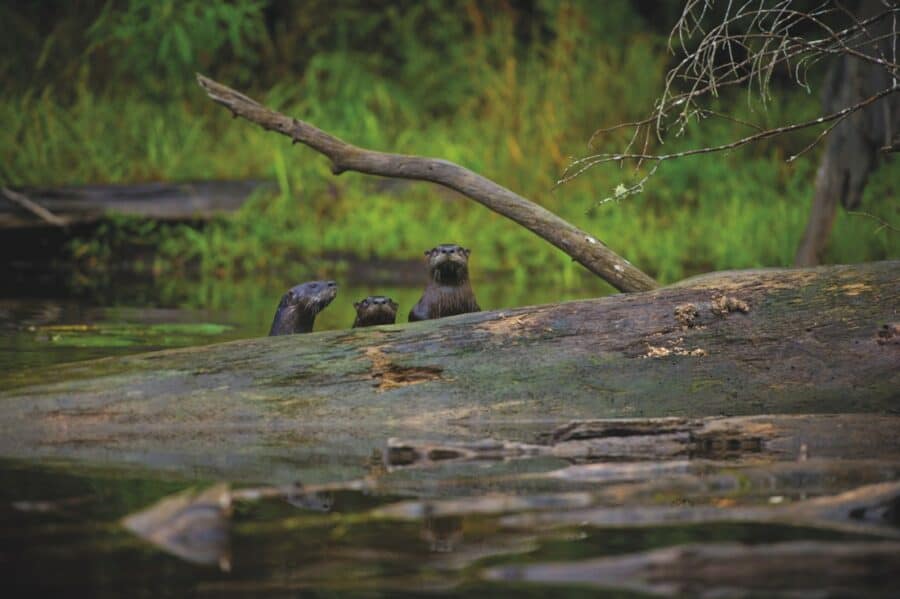 We stop for lunch and discover a mangled canoe tossed far from the waterline and returning to earth. Over 800 square miles of Upper Peninsula hinterlands feed this beast of a river, and its power is not to be taken for granted. The Tahquamenon springs clear and bubbling from the sandy interior, and the stream carries a Blue Ribbon trout designation for part of its headwaters, but gradually the water morphs to a rich root beer brown from the tannin oozing from the swampy flanks. On our trip the Tahquamenon River is at medium levels but enormous spring runoffs no doubt snatched the now-mutilated canoe from the banks and left it shredded. The brooding waters of the Tahquamenon are pregnant with power and history. I think of the birch-bark canoes that came before us and the hobnailed lumberjack boots riding the last rafts of virgin pine.

I thought we’d hear the roar of the Tahquamenon Upper Falls as we approached from upstream, but all is silent. The landscape has changed from swamp and marsh to a steep piney ridge as the river picks up speed. Soon we see the takeout at a dock where a once-a-day riverboat tour stops. We ease up to the steep bank, cling to roots and branches to pull ourselves and our packs from the canoe for the half-mile portage around the falls. Ahead, a crisp horizontal line marks the fast-moving plunge to the 200-foot-wide brink where 50,000 gallons of water per second drop 50-plus feet into a rock-walled gorge. The Upper Falls is rightfully the main attraction of Tahquamenon Falls State Park. It’s the second largest falls east of the Mississippi, bowing only to Niagara Falls. As we lug our gear and canoe over the portage trail at the base of the falls we see tourists at the falls observation deck point and wave to us from across the river. Like most visitors to the park, neither Brian nor I have seen the falls from this side of the Tahquamenon River.

We’re amazed to spot a trail that leads along the edge of the gorge to behind the falls. The rock wall is covered in ferns and mosses and drips with seeps and spray as we make our way into the deafening hollow. Here the river breaks its upstream silence, spills its secrets and story in a raging catharsis of spray and foam. We are soaked, smiling and humbled by the time we get back in the boat and continue on downstream. 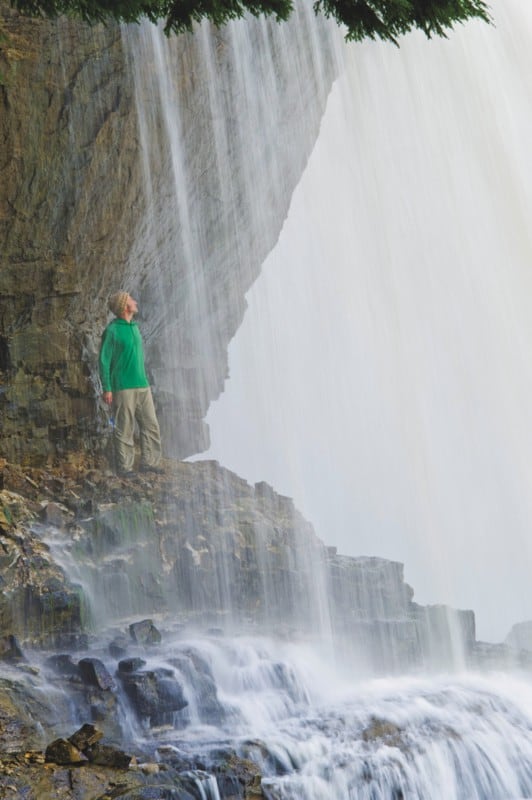 The next four miles are a blur of riffles, boulders and ledges. It’s hardly the same Northern Michigan river that we paddled this morning. The current is zipping us along through a steep-sided canyon, and several times we have to get out of the boat and use bow-and-stern lines to ease the canoe over abrupt rock ledges. We attempt to run one drop only to back-paddle out of it at the last second when we realize sharp edges would shred our boat.

Finally we approach the island in the center of the river that splits it into two flumes at the Tahquamenon Lower Falls. We gingerly hand the packs and canoe over a five-foot ledge as tourists snap our photo from an observation deck on shore.

The Tahquamenon Lower Falls area is home to a state park campground, and we consider calling it a day, but our destination is a remote backcountry campsite along the North Country Trail farther downstream. We’re not sure how much farther it is, as we have conflicting information. It turns out to be several miles more than we guesstimated, and hours later, by headlamp, we barely make out the scant foot-trail linking the site to the water’s edge.

Over the next three hours we set up camp, blaze up a warm fire and demolish nearly all the food we brought with us. On the water a beaver slaps its tail and dives, while along the ridge behind us coyotes welcome the dusk. It’s been a long good day. It’s going to be a long cold night, but it’s okay because tomorrow is going to be another long good Northern Michigan day.

ExploreM123.com is a good starting point for general information on the region.

Boat rentals and shuttles:
Ken Orlang at The Woods can set paddlers up with everything they need for a few hours or a few days on the Tahquamenon and other local rivers and lakes. thewoodscanoerental.net

Post-float libations:
Tahquamenon Falls Brewery and Pub located at the Upper Falls viewing area. Owner and brewmaster Lark Ludlow is a descendant of the logging family that originally owned what is now Tahquamenon Falls State Park. Today she brews up a variety of fresh quality beers served alongside hardy pub food in an Up North atmosphere. tahquamenonfallsbrewery.com

Fast and fresh: Brown Fisheries Fish House in Paradise. Nothing fancy here, just the freshest darn fish possible from a third generation Lake Superior fishing family. They go fishing in the morning and serve it in the afternoon, simple as that. Hours can be erratic due to fish supply. Cash only. 906.492.3901

Lodging: Tahquamenon Falls State Park has three campgrounds, one at the river mouth and two at the Lower Falls area. Some with hot showers and full services. Check out the schedule of top-notch interpretive programs, especially if traveling with children. michigan.gov/dnr. Halfway Lake Resort is a simple, clean family-run cluster of cabins on Halfway Lake near Newberry. Ask owner Josh Martindale for some fishing tips for the region. halfwaylake.com

Nearby Paddles: The storied waters of Ernest Hemingway’s Two-Hearted River are just to the north of Newberry. A popular day trip runs from the Reed and Green Bridge to the mouth at Lake Superior. A forest fire partially burned this area in 2012 and destroyed the Rainbow Lodge shuttle and canoe rental. The Pretty Lakes Quiet Area offers a group of five small non-motorized lakes with sandy shores and clear waters.

This article and additional photos are featured in the September 2013 issue of Traverse, Northern Michigan’s Magazine. Get your copy here!