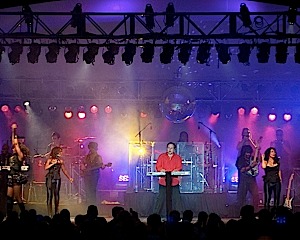 Northern Michigan Music: The Odawa Casino in Petoskey is getting down to KC and the Sunshine Band. And for 62-year-old Harry Wayne Casey, the second time around is even better than the first. The leader of KC and the Sunshine Band, Casey (yes, that’s where the name comes from) hit the top of the charts in the mid-70s through the early 1980s. But personnel changes, changing musical tastes and the vagaries of the music business led him to an early retirement.

Of course, everything old is new again, and since the early 90s, KC and the Sunshine Band have once again brought audiences to their feet. “I was retired for ten years, then back strong the last 20,” said Casey. By “back strong,” he means touring and performing, something he and the band didn’t do that much of during their recording heyday. That includes a performance at the Odawa Casino in Petoskey Sept. 27.

Casey says while he enjoyed making hits like “I'm Your Boogie Man,” “(Shake, Shake, Shake) Shake Your Booty” and “Keep It Comin’ Love,” he now enjoys performing them without having to worry about creating new hits. “I’m not obligated to get the next album out. I can do what I want to do,” he said. And what he wants to do is sing with the latest edition of the Sunshine Band for audiences across the country.

“We always get a great reaction. The audience wants to get up and have a good time,” he said. Of course, sometimes the older portion of his audience may not be so spry as to want to stand and dance throughout a show, or a venue may not lend itself to that. “Different venues (want) people to stand up or sit down.” And that’s all right with him. “Hey, I’m in my 60s, and sometime I want to sit down and listen,” he said with a laugh. “I just went and saw John Mayer, and thought, ‘Can we just sit down for a minute?’”

Casey’s always been a music fan, since his days starting the band when he was a record store employee, keyboard player and aspiring songwriter. “I love going to see the artists I remember,” he said. “Music is a very big part of all our lives. It’s the memories of those times. Certain parts are our personal psychologists. The words and songs guided us through setbacks. We were communicating with the artists.”

Like many of those artists performing the music from days gone by, Casey’s show relies on the hits rather than the misses. “I’m not playing a bunch of deep cuts from the albums,” he said. “It’s all my hits.” So songs like “Get Down Tonight,” “That’s the Way” and aforementioned tracks like “Boogie Man” and “Shake Your Booty” that the audience knows and loves make up the set. But it’s not just his hits. “We do things like ‘Brick House’ the audience is familiar with.”

While some of the members of his 15-piece backing band have been with him for decades, others have come and gone—“from one day to 37 years,” he said of the tenure of current members. They not only have to have musical ability, but a genuine love for the music they play—no one wants to pay to see someone mindlessly run through “That’s the Way” without any joy or enthusiasm. And while KC and the band embrace the latest technology, it’s to improve the show, not to pre-record tracks or anything like that. “Everything on our stage is totally live,” he said.

While Casey plays the hits, he does say they are altered slightly from time to time, to better fit the setlist and enliven the arrangements for his enjoyment and that of the band. “We might change the intro or something—camouflage what song is ready to happen, add something to the middle or the end, but  keep the … song intact.”

KC and the Sunshine Band perform at 8 p.m. Friday, Sept. 27. For tickets, go to OdawaCasino.com.