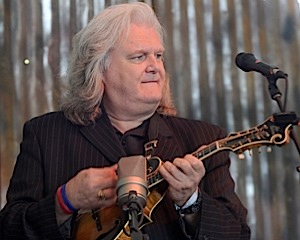 Northern Michigan Events: Although he was one of country music’s biggest draws, garnering a host of hits and awards, Ricky Skaggs never really thought of himself as a country performer. Part of that was the transition of country music into a more commercialized sound, and part was that the shows began morphing into spectacles resembling rock concerts, complete with props and light shows.

“It started changing in the late 80s and 90s. A lot of groups began bringing in a pop sound,” Skaggs said. “It became kind of a circus show. Garth Brooks, Brooks and Dunn, it became big shows. I thought I was more of a concert artist than an entertainer.”

Thus his career came full circle, from his auspicious beginnings as a bluegrass prodigy to a recognized master of the genre. That’s the Ricky Skaggs the audience will see and hear at Odawa Casino in Petoskey Friday, Sept. 13.

Not that he’ll totally ignore that slew of #1 hits – songs like “Crying My Heart Out Over You,” “I Don't Care,” “Heartbroke,” “I Wouldn't Change You If I Could,” “Highway 40 Blues” still occasionally find their way into his setlist. “I had a great run of success, blending country with my bluegrass,” Skaggs said. “It gave me a unique sound.”

That sound came from his upbringing, which found him taking up the mandolin at age 5. Shortly thereafter, he found himself onstage with Bill Monroe, and at age 7 was on TV with the legendary Flatt & Scruggs. At 15, he and fellow teen Keith Whitley joined Ralph Stanley's band, the Clinch Mountain Boys. “We played while we were out of school during the summer, then after graduation joined the band fulltime,” he said.

His solo career came about somewhat by accident. He was a member of Emmylou Harris’s Hot Band, writing arrangements, singing harmony and playing mandolin and fiddle. When Harris became pregnant, she stopped touring. “I said, ‘Hey, I’ve still got bills to pay,’” said Skaggs with a laugh. He joined CBS (now Sony) and began his own string of hits. But he never forsook his traditional sound altogether, and helped usher in a new era of more classic country with fellow singers like Randy Travis and George Strait. “I’m thankful for my bluegrass roots,” he said.

While he embraces those roots, he’s not afraid to venture outside them either. His most recent recording is a collaboration with Bruce Hornsby, whose own genre-hopping led him to pop hits, touring with the Grateful Dead, experiments with electronica and appearances on record with Bob Dylan, Steve Nicks, Squeeze and jazz icons Wayne Shorter and Charlie Haden. Skaggs’s and Hornsby’s live CD, Cluck Ol’ Hen, was released just last month. It mixes traditional mountain music, bluegrass chestnuts, and originals from both principals. “It’s a fun record,” said Skaggs.

Like his friends Bela Fleck and David Grisman, Skaggs says he enjoys stretching the limits of bluegrass. “We encourage each other,” he said. “I feel it’s good for the music. That’s how it can grow.”

For insights into how Skaggs grew, fans can pick up his other new offering: His autobiography, Kentucky Traveler: My Life in Music. Skaggs says writing it was much harder than writing music. “It was a challenge for me. I can go into a studio without a lot of notes, but I had to discipline myself (for the book),” he said.

Skaggs said it was important that the book reflect his voice, rather than sounding like something or someone it was not. “It was very important to get the rhythmic quality (of how I talk). I’m from Kentucky, not Chicago. I wanted it to sound like me. It had to have mountainese in it. I think we pulled it off.”

Showtime at Odawa Casino in Petoskey is 8 p.m. For tickets and more information, go to OdawaCasino.com.