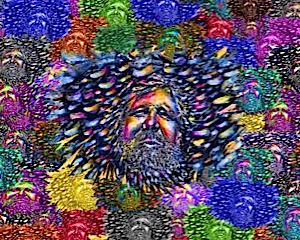 Traverse City artists Paul Welch has a way of sucking even in the most art-leery into his vortex world where works from Rembrandt to Warhol swirl out their passionate messages. Welch’s long career has ranged from the 14 ceiling-height stained glass windows in Traverse City’s All Faith’s Chapel (now the Women’s Resource center) to paintings now housed in private and public collections. Along the way, Welch helped found the Northwestern Michigan College Art Department (where he taught art history, painting and sculpture) and was instrumental in the creation of the Dennos Museum Center. And foremost in my mind, at least, he was my 8’oclock Art History 101 instructor back in 1976. I was 18 that year and Welch, with his windmill arms and his guttural references to voluptuous Baroque models, was one of the few adults capable of awakening a sense of anything about art in my friends and me at that dark, wee hour.

So, what is the granddaddy of Northern Michigan’s art scene up to now? Welch has entered an exuberantly colorful 14-by-28-foot print entitled Face to Face, in the 2013 Grand Rapids ArtPrize. To understand it, Welch told me to picture George Seurat’s 1884 pointillist masterpiece La Grand Jatte. When you see La Grand Jatte from far away, he explained (eyes dancing and hands flying through the air) the painting looks like blocks of color. Get close and you see the careful, tiny dots. There’s a parallel here with his Face to Face, he continued. From far away the painting appears to be giant, colorful flowers with a face (Welch’s self-portrait) in the middle. Get close and the flowers become more Paul Welch faces.

Intrigued? Who could help but be. Here is more of what Welch told me about Face to Face:

Q. The print started out as a self-portrait. How did it morph into something so large?

A. To enter ArtPrize, you [meaning the artist] have to get your own downtown venue to display it. I emailed Plante Moran (well, my granddaughter helped me because I am the worlds worst emailer) and they said we’d love to hang it—but we’ve had problems in the past with people who have drilled holes in the building and didn’t fill them.

Q. So then they agreed to have it displayed in one of the spaces between columns of the parking garage—a space that happened to be 14-by-28 feet:

A. Yes and it turned out to be the perfect spot. You can see it from the park across the river, the bridge is next to it and there’s a walkway that goes right by it. Here’s the interesting thing about it. If you sit at the park and look across the Grand River it looks like an impressionist painting. You see it at a distance.  But then as you go up to it you begin to see the faces. The joy of it is that you see one thing at a distance. Then you approach it and suddenly you see these faces appear. Mystique.

A. Watercolor, pencil … anything else I felt I wanted to use.

Q. Tell me about the process of making it big.

A. ArtPrize, I thought why don’t I enter that? I had done this self-portrait but I thought I can’t hang a watercolor—the first rain the watercolor would go down the Grand River and you’d have a blank image.  So I took the piece to Britten Banners in Traverse City (Paul Britten is a former student of mine at NMC—is an amazing individual). They are geniuses over there.

The designers there printed it on mesh for me—mesh so that the wind will blow right through it. I stood at their computer screens and chose the colors for all of the faces.

Q. There is (literally) a giant emphasis on self-portraiture here—what was your thinking behind that?

A. Because of the Dutch heritage of Grand Rapids I wanted to honor great Dutch artists like Van Gogh and Vermeer. But was also thinking Warhol and Chuck Close. Have you heard of Chuck Close? He does these enormous portraits basically the same way this is done.

Q. Face to Face has also turned out to be a bit of a social commentary?

A. Yes, it’s my answer to Facebook. I love it that it is big enough for the guys who printed it to walk on. [Chuckles].

Q. You are known for not being overly enamored with technology—yet your print is digitized. Care to explain?

A. I really like the interface with technology. I think there should be more of it. If the print was its original size and it was hanging on that wall no one would ever see it. If you do something big people see it. Offset printing used to be little teeny dots and you could take a magnifying class and see them. Now it is pixels—you can get as close as you want and you still can’t see the separation. It opens up all kinds of possibilities.

Q. What Grand Rapids has done with ArtPrize has inspired you:

A. Yes, I want to have our own ArtPrize in Traverse City. Look at the sides of these buildings—hanging art here would be magnificent.

Q. You are inviting folks to join you on a bus tour to ArtPrize:

A. Yes. It’s a one-day deal. We leave at 7 a.m. on Thursday, September 26. I tour the group through all the venues including my work. Later, I’ll give a talk about the 2013 ArtPrize entries at the Grand Rapids museum. The museum has some Albrecht Dürers that I thought I’d talk about as well. It will be a lot of fun. One of the things people don’t realize is if you try to park down there it’s difficult. This way you can go down and back the same day.