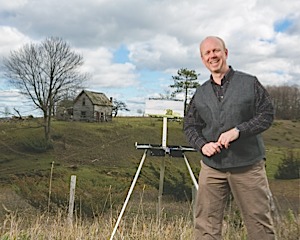 Northern Michigan Art: Caesar Citraro left behind a career as a nationally renowned art restoration specialist and moved North to create paintings of his own amid the landscape of Petoskey and Harbor Springs.

If you catch Northern Michigan artist Caesar Citraro in front of a nearly blank canvas he’s about to paint—a flat surface prepared with the vaguest hint of sketching—you’ll see his water-blue eyes flash behind his square glasses as they trace across sharp horizontal planes.

He looks like he’s reading text on a sign, only there’s nothing but space and a few shadows before him. He stands very still. There’s the loud silence of thinking. There’s a deep flood of sunlight through the wide Northern Michigan studio window. Then, suddenly, he steps forward, raises his hand, and raps the canvas with the side of his paint-smudged thumb in three deliberate spots. All at once, in motion, he’s mixing paints into a mid-range gray—not a color he intends for detail, but to create what he calls “signposts.” And indeed, he maps his canvas, his eyes watching a landscape photograph he has taped to the wall, his hand deftly marking off trees, a fence, a low line of shrubs, the rolling contours of snow. 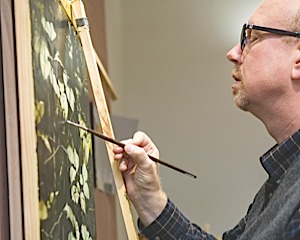 Citraro is a masterful Northern Michigan painter, layering oils until the two dimensions of his canvases seem to gain a third. Plump heaps of hydrangea blooms beg you to lean in and inhale their summer smell. Cool planes of snowy hills ask you to draw your coat a little tighter against imaginary wind. A weed-choked two track invites you to follow it all the way to its end, far beyond the depth of paint and brushstroke. The sprawling natural world surrounding Petoskey speaks to him, and after he’s filtered the landscape through paint and brush, he reveals what it says to those who admire his work.

Clad in Crocs, jeans, and a paint-splattered sweatshirt, Citraro fits right into the comfortable practicality of his Northern Michigan art studio. He hovers over a workspace beside a partially done still life, deftly pressing on paint tubes to squeeze out a precise amount. “I usually go for the tubes that have the most paint in them,” he says, chuckling. “It’s not really about any one color, but the subtle layers of translucent colors.” 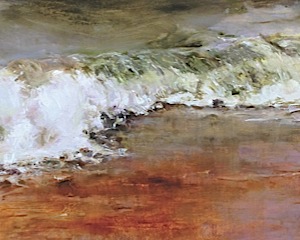 His fingers twirl above a collection of paintbrushes, waiting to settle on exactly the right one. Some are housed in a yarn-wrapped can that looks like a handmade gift from one of his daughters. Some are stuck in holes drilled in a piece of 4-by-4 lumber. Some are in an empty can of La Preferida green chilis.

You can find Citraro outside in fair weather, teaching plein air painting to students. At 4:30 a.m., he’s at work in his studio, iced coffee by his side. (Always iced, he says, because it’s forgiving: if you forget to drink it for a while, it doesn’t turn awful the way hot coffee does.) He often paints early to get in work before his two daughters wake up, because he is a father in the same way he is an artist—devoted, practiced, willing to make cheese sandwiches when his kids come bounding into his studio, hungry and accustomed to paintbrushes and the turpentine smell of their dad. While his wife works as a doctor at the local Northern Michigan hospital, he looks after the girls, squeezing in painting while they’re asleep or at school.