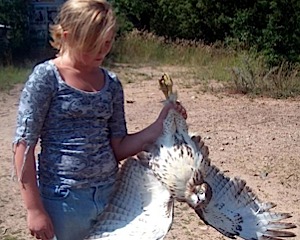 Northern Michigan Buzz: Of the dozens of stories that wire in each morning, we almost died reading this one. Madeline's mom Esther DeLong sent in her recollection of the event. Check this kid out!

We were in the house and heard our free range chickens screaming and squawking. Madeline Thornton (my 10-year-old daughter) ran outside one way and I went out the other back door. I came around the house and called to her to see if she had seen what it was. She was behind our garden and behind some tall bushes where I could not see her. "It's a hawk," she said.

I called to ask her "What kind? Did you see it?" at which time she came walking out with the hawk in her hand and said "This kind."

It was on top of one of our roosters and she reached into the brush and grabbed it, flipped it over and grabbed it by the legs so the talons (Redtail hawk's talons are about an inch and a half long) could not get her.

The rooster is fine, Maddy had one small poke in her palm, and after a good lecture from my daughter about eating her favorite chickens the hawk was released, unharmed. Her dad explained to her that usually people who handle large raptors wear gloves that go up past their elbows.

Madeline is fearless with our mean chickens at home. Until I was about 20 I was afraid of the nasty roosters that like to attack you, but Madeline has grown up around me and my example. What you do with an ornery rooster is chase him down, hang him upside down (all the blood runs to their head) and they go limp and easy to handle and learn to avoid you next time. Apparently this works on Redtail also.

My first mental reaction was "Oh my God put that down!!!" Then I realized he was making no move to rip her flesh off, so I ran and got the camera and took a few pictures.