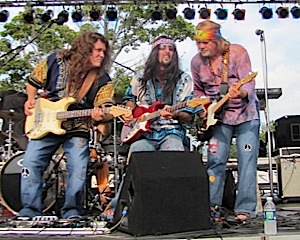 Traverse City Music: Think back to 1967; the teens of Traverse City and the surrounding communities attending dances and enjoying live music at their schools, clubs or on the top 40 radio station. Now imagine those grown adults having an opportunity to relive their youth through the music of a Magic Bus concert, a musical trip back in time.

This Saturday, September 7, 2013, let Magic Bus transport you to the age of beads, flower power, headbands, peace signs and  epic outdoor music festivals. Renowned for their live performances replicating the greatest hits of the late 60’s Woodstock era, you’ll believe you're swaying to the stylings of 30 separate original groups. The best of the Small Faces, Bubble Puppy, Grass Roots as well as Three Dog Night, the Who, Jimi Hendrix and Crosby, Stills, Nash and Young come to the stage of the Southside Hideout at Buckley's Rock N' Rides Festival this weekend.

Voted #1 band in Detroit’s WDIV, ClickonDetroit, “Vote 4 the Best” contest for 2012 and 2011, voted # 1 in the Detroit Hour Magazine, Best of Detroit 2012—Magic Bus is made of six southeastern Michigan musicians who incorporate guitars, drums, keyboards as well as harmonicas, tambourines, flute and various percussion instruments into every colorful show. They not only re-create the atmosphere of the Woodstock era with music selections, but also present an authentic time warp with stage members fully costumed to the era. Come join the festivities in your 60s getup this Saturday!