A home that architect Bob Holdeman designed for his young family in the 1960s has more than stood the test of time.

At the start of what would be an illustrious career, architect Bob Holdeman designed and built a home on Old Mission Peninsula for his young family. Back in 1967 when he broke ground, there were folks who thought Bob and Jane Holdeman were a bit daffy for building a home for their young family on a (then) secluded bluff 10 miles out on Old Mission. There wasn’t much going on out on the peninsula back then except cherry farms and woods. Jane would be pretty darn isolated with the kids …

Then again, the Holdemans weren’t exactly the conforming type: take the style of their new home. On a peninsula scattered with foursquare and Victorian farmhouses, Bob planned to build a Japanese- and Frank Lloyd Wright-inspired home using post-and-beam construction and 4-by-4-foot module spacing—a direct play on Wright’s efficient and harmonious use of the square geometry. The home would be topped off with a flat roof. In Northern Michigan, no less, where flat roofs supposedly meant sure problems in the winter. 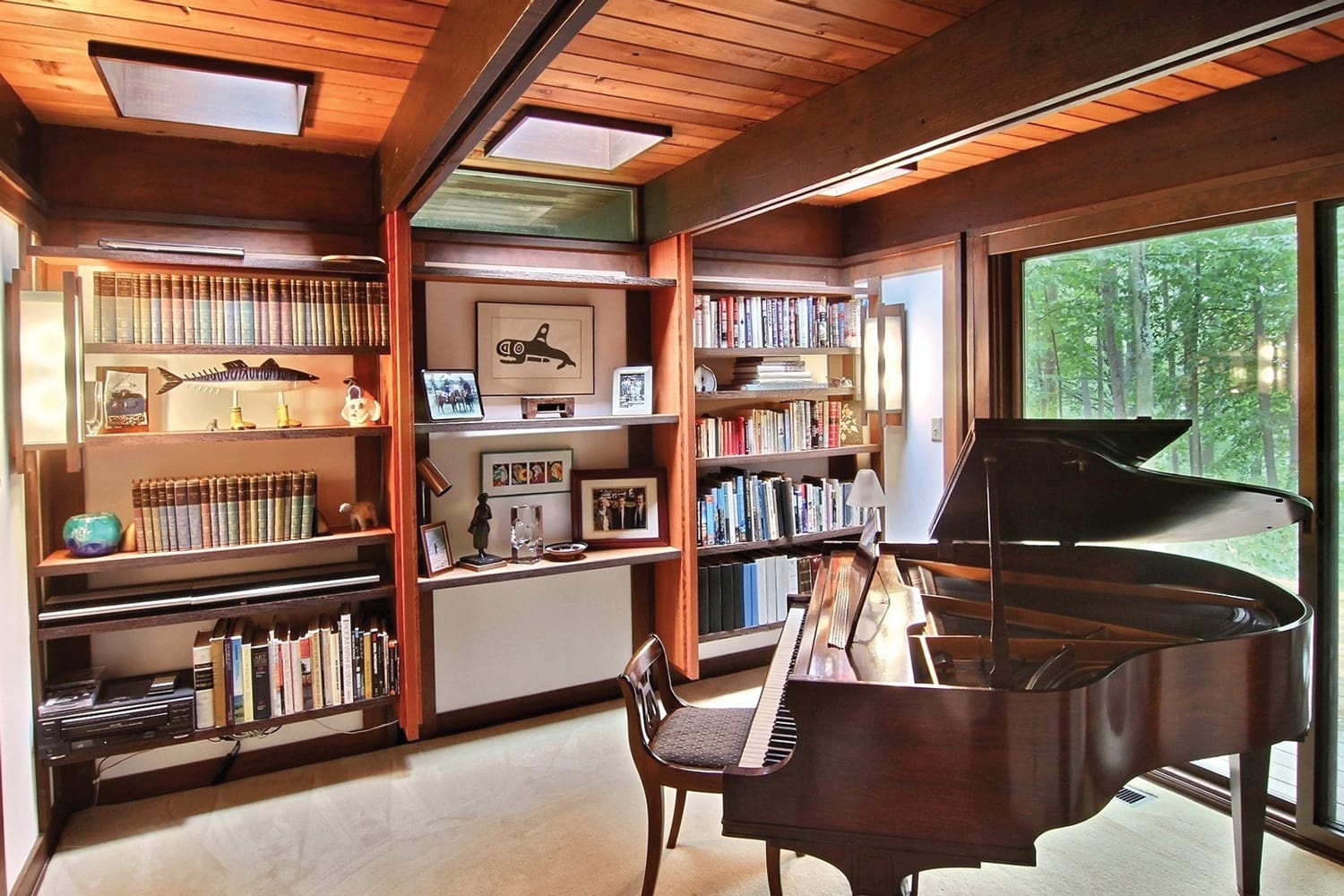 There’s more. Bob, the young architect just out of the University of Cincinnati, had also devised a form of sophisticated prefab construction that was way ahead of its time. Bob asked the guys down at Red Mill Lumber Co. (now closed, it once operated on downtown’s Hall Street) to construct the structural pieces of the home inside the lumber company warehouse so that he could simply assemble them on his home site. Think Legos. Bob planned to build the home on his after-work hours, and since he hired just one assistant, it was important the method save him time.

Snap, pound, pop. The Holdeman home was up and ready for living in a year. Not that the few passersby back then would have noticed much unless they were invited up the wooded drive. The dark-stained, cedar-and-glass structure set into the bluff was all but camouflaged from the road. Zenlike. Wrightlike. But very much Bob Holdeman. 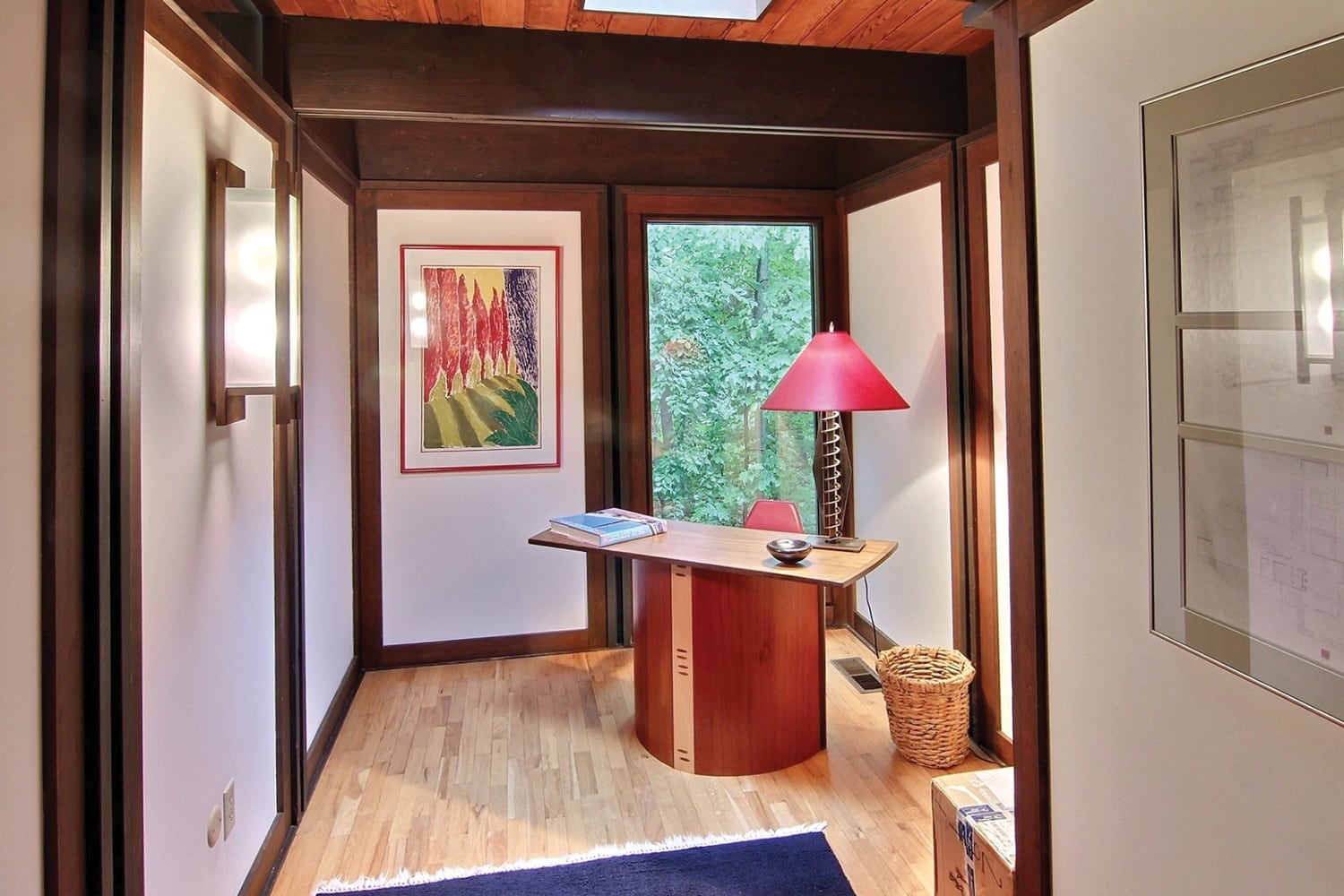 Forty-five years later, Bob Holdeman is settled into a handsome modernist leather chair, ready to offer a short personal tour of his former home. It is still simply lovely. Three floor-to-ceiling panels of glass flanked by a set of smaller but still generous windows form the home’s façade. That flat roof rises a couple of feet higher than the rest of the home in the living room to make room for a clerestory that pours light into the room and over plants set on a ledge below it—delivering the integration with the natural world Holdeman had planned. That flat roof has stood the test of time as well. “With proper maintenance, it has worked very well,” Bob says.

After a career that has included designing some of downtown Traverse City’s premier commercial spaces (Dennos Museum Center, Traverse City Convention and Visitors Bureau and Radio Centre) and a slew of upscale custom residential projects, Bob is retiring. He and Jane sold the home years ago, but he has stayed in close touch with it. The first owner, a woman who had an art gallery in Traverse City, finished off the downstairs, consulting with Holdeman before she made any changes. Among her touches is a free-form travertine marble floor in a lower level bathroom that plays off the explosion of abstract arcs in an adjacent stained glass window Bob made years ago with friend and artist Paul Welch. (Later, in another studio, the pair crafted the windows in Traverse City’s St. Francis Church.) 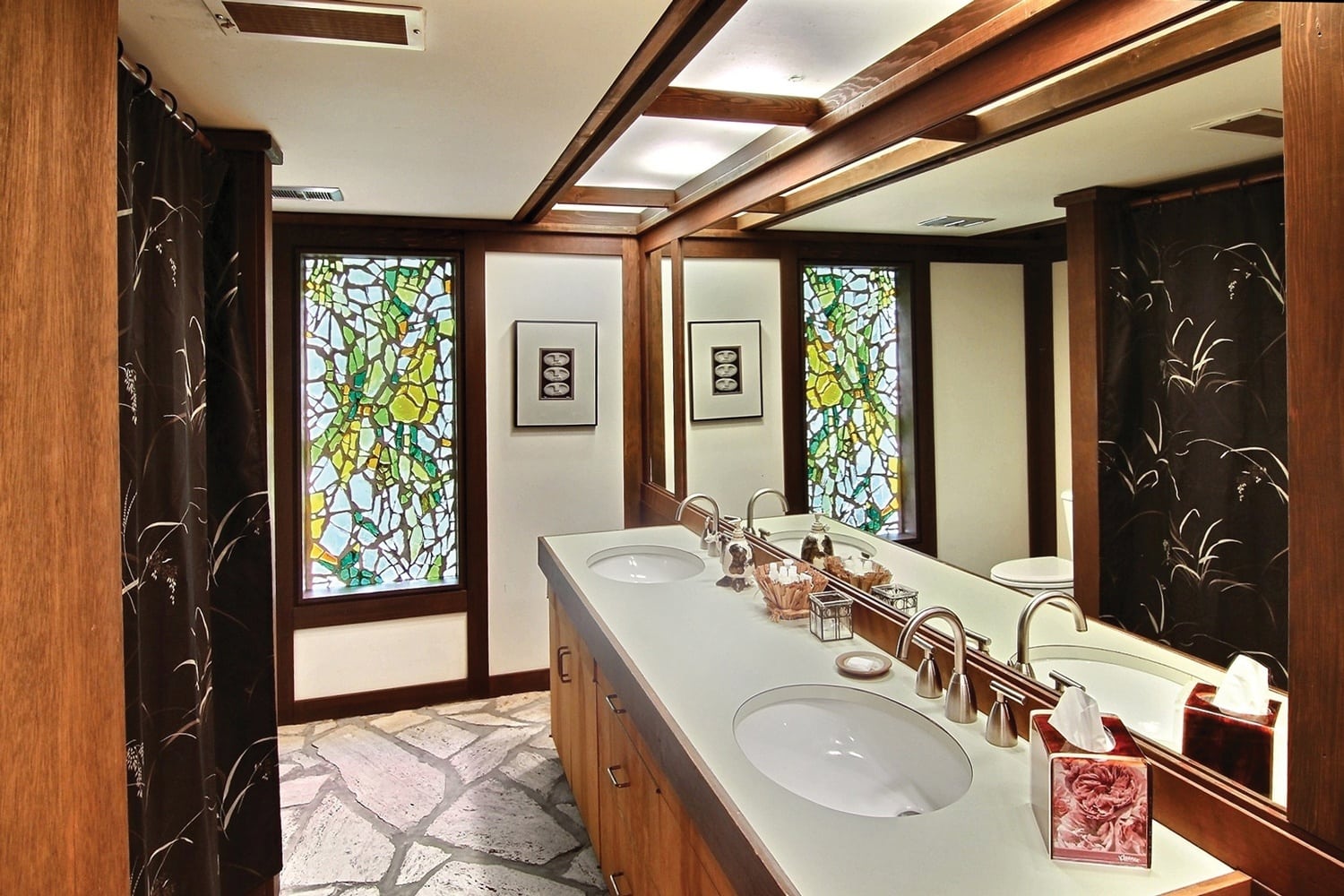 In 1987, Jim and Stephanie Walter, purchased the home. The couple, the home and the architect are a perfect set. Stephanie’s parents once planned to build a Frank Lloyd Wright Usonian home in southern Michigan. She still has Wright’s plans for it—framed and hung on the wall in her office. The home was never built, but the plans stirred Stephanie’s lifelong interest in Wright-esque modern design.

Over the decades the Walters have completed Holdeman’s vision for integrating the structure with its landscape. Working with him through the entire process, they added a dramatic 48-foot-long pergola to the entrance of the home. Dark stained to match the home and constructed in a calming, lineal pattern, the pergola accentuates the home’s Asian characteristics. A matching, dark-stained redwood fence encircles the home, creating private spaces that extend the home’s footprint to the exterior.

The home’s crowning realization between interior and exterior is a pool set into the bluff. It’s accessed by stairs that cascade from the pergola. Ben Begley, a Traverse City–based architect and landscape architect, teamed with Holdeman on the L-shaped pool set in New York bluestone and a sea of pachysandra. “There is such a feeling of being connected to the environment in this home,” Jim says. “We are so honored to have been its owners for 25 years.” 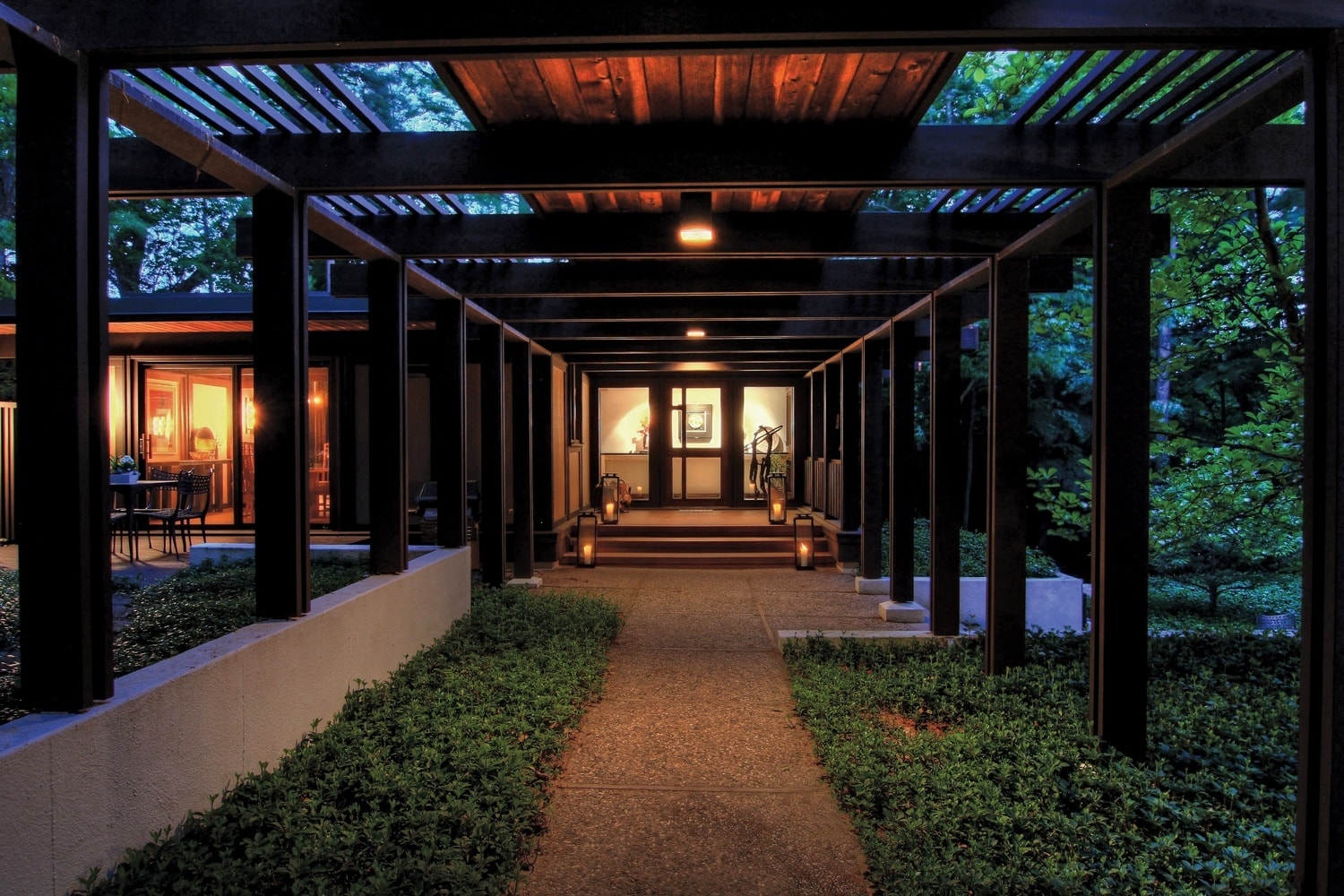 This story was featured in the August 2013 issue of Northern Home & Cottage. Click the cover to read the latest issue of the magazine.