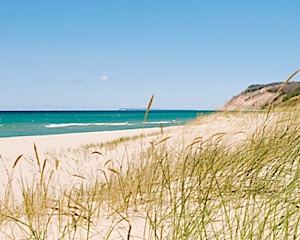 Northern Michigan Outdoors: Sleeping Bear Dunes National Lakeshore is now getting the attention this special place deserves – from tourists and residents, of course – but also in Washington D.C. Congress today has a real opportunity to pass a long-awaited measure that will secure the future of the dunes in the way that we as community members have envisioned and worked toward for years.

Consensus was reached in 2009 among local stakeholders and the National Park Service on a general management plan for Sleeping Bear that represents a locally driven approach to wilderness designation. The missing piece is passage of federal legislation that would make that plan official. What’s the hold up?

We need the U.S. House of Representatives to pass H.R. 163– the Sleeping Bear Dunes National Lakeshore Conservation and Recreation Act. The Senate passed identical legislation in June, led by Senators Levin and Stabenow. The House bill is sponsored by Congressman Benishek and cosponsored by nearly all of Michigan’s Congressional delegation – Republicans and Democrats alike. The House Subcommittee on Public Lands took a key step in July by holding a hearing on the bill. Now, we hope to see this bill approved, unchanged, by the House Committee on Natural Resources and passed by the full House this fall.

Passage of this bipartisan measure will finally put into statute the balanced wilderness boundaries within the park that were endorsed by the community six years ago – the result of nearly 100 pubic meetings between the Park Service and regional stakeholders. This legislation makes certain that access roads community members fought hard to keep in place will remain open and under local control. This bill preserves access to nature for varied recreational uses and protects as wilderness over 32,500 acres of those resources that make Sleeping Bear one of America's most beautiful and treasured places.

The park has consistently been a significant regional economic driver, attracting visitors who help keep area businesses strong. On top of that, the measure is cost effective – it enables park management efficiencies that aren’t possible today. This bill is an opportunity for Congress to deliver results that make dollars and sense. The value of the Sleeping Bear Dunes National Lakeshore Conservation and Recreation Act for the continued economic and ecological health of this unique region of the country is clear to residents, visitors, business owners, conservationists, and our Congressional delegation.

We commend Congressman Benishek and the 11 House co-sponsors as well as Senators Levin and Stabenow for their leadership on this legislation. Let’s get this done–it’s high time to secure Sleeping Bear’s future for those here today and those who will follow tomorrow.