U of M Students Show Short Films at TCFF 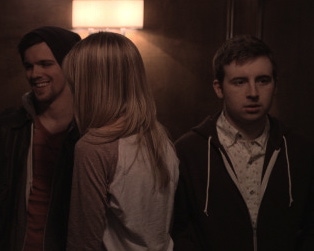 Traverse City Film Festival: Screen Arts Class 423 is the highest-level film making class at the University of Michigan. Every winter term, the students enrolled in this class turn a script from the Advanced Screenwriting class into a short film that premieres at the Traverse City Film Festival in August. The students in “423” are responsible for all aspects of the film, from fundraising on Kickstarter to directing, casting and marketing.

This year, Fender Bender and Open House premiered at the City Opera House. As audience members anxiously waited outside the Opera House on Front Street, expectations were high as Film Festival attendees buzzed about how much they enjoyed the U of M Shorts of film fests past. Thankfully, this year’s films did not disappoint.

Fender Bender follows Jack Reedy (portrayed by Dan Tracy), a self-absorbed recent high school graduate who has his world turned upside down when he learns that his grandfather has pancreatic cancer. When Jack visits his grandfather in the hospital, his grandfather asks Jack to spend the summer fixing up his old hot rod with his son Mike. Mike, Jack’s uncle who is just a few years older than him, has some mental disabilities but he is still regarded as one of the friendliest people in town. Mike introduces Jack to Beth and then recruits her in their efforts to restore the car. The trio works on not only restoring the car, but Mike and Jack’s broken relationship.

Open House is a murder mystery set at a high school party. When Gary, your typical high school jock is found murdered, Luke (portrayed by Nick Skardarasy), a shy wallflower must find the murderer to protect the girl of his dreams, Edie (Quinn Scillian), and his best friend Jonah (Philip Maxwell) from being charged with the murder.

The acting in both films was outstanding and the filmmakers did an excellent job of developing the characters, which can be difficult in short films.