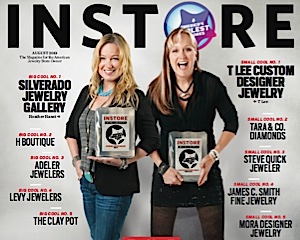 A total of 89 stores entered the 12th annual contest that highlights the best examples of independent jewelry retailers in North America.

“Every year we feel privileged to bring our readers the best of the best in our industry,” said Ralf Kircher, INSTORE’s executive editor. “From its charming appearance to its impressive product lineup, James C. Smith Fine Jewelry easily falls into that category. But a store wouldn’t really fit our ‘cool’ criteria if it weren’t for such aspects as innovative marketing and creative retail environment.”

The top five winners in the two divisions are given trophies and featured in the August issue of INSTORE and at instoremag.com.

Check out all the best boutiques of Traverse City in the MyNorth Vacation Guide.
X
X