There Shall Be No BS! At The TC Beer Fest 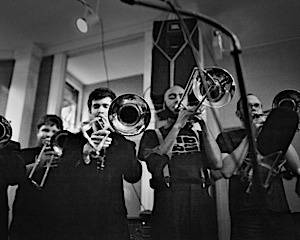 Traverse City Events: There’ll be no BS at the Microbrew and Music Festival Aug. 23 and 24. Literally.

The No BS! Brass Band will be one of the featured bands with its unique fusion of sounds and styles, everything from New Orleans brass bands to – Led Zepellin? Yep, there it is, right on the band’s website: … the band embraces the spirit of New Orleans into its original East Coast modern funk. Their danceable arrangements are outstandingly well thought-out and organized, drawing inspiration from funk, jazz, klezmer, calypso, and Led Zeppelin.

Trombonist Reggie Pace, who founded the group with trumpet player Lance Koehler, says the group is part of a rich tapestry of music in their hometown of Richmond, Virginia. “Richmond definitely has a music scene,” said Pace. That scene includes numerous concert halls and clubs and a variety of local performance groups, from rock bands to choirs, classical and chamber groups to blues outfits. There’s a jazz festival and a folk festival, both of which attract national headliners. So No BS! Brass Band is less an oddity than another entry in the music world.

The band came together like so many others: Friends call one another to play music together. “Lance and I are best friends, and we decided to make a band together,” said Pace. But rather than just wailing away in a garage to “Louie, Louie” while they figured out what and how to play, Pace, Koehler and their friends came together over a shared love of brass band styles, with nary a guitar in sight.

“Lance and I played in a New Orleans-style brass band for a while, but we wanted to write our own stuff,” said Pace. “We wanted to be in the tradition but didn’t want to copy.” The musicians were all conservatory-trained, and they stretched that tradition to include many of their favorite musicians and styles, from John Coltrane to James Brown.

And yes, they love them some Led Zep. “Led Zepellin was just an electrified version of Mississippi blues. Their roots were in the African American tradition. They just changed instruments and vocals,” Pace said. Figuring turnabout was fair play, Pace and his cohorts play in a heavy style reminiscent of Zep, but with tuba, trumpets, and trombones.

Not that you’ll hear “Whole Lotta Love,” “Stairway to Heaven” or “Black Dog” in their sets or on their albums. No, instead you’ll get Charles Mingus, Rush, even Michael Jackson’s “Thriller,” along with a host of original tunes. The 10+ players in the group (trumpets, trombones, tuba, drums, and a lone saxophonist) harmonize with each other such that you don’t miss the thick chords of keyboards or guitars, or at least that’s the hope.

And while they take their cues from rock, funk and the brass band heritage, the group’s overall attitude has more in common with jazz innovators. “Some of the purists say we’re not New Orleans enough,” said Pace. “But it’s like Miles Davis—he played cool jazz, free, r&b, rock-jazz. But (whatever the style) it was always his trumpet and his sensibilities.”

No BS! Brass Band has toured the country and has performed at the Kennedy Center, Lincoln Center, the Festival of New Trumpet Music, and on National Public Radio’s Tiny Desk Concert. The band is but one of several musical groups that will be playing at the festival, including Michael Franti and Burning Spear and the Wailers. The two-day event at the Village at Grand Traverse Commons features over 300 craft brews and edibles from several area restaurants. For more information, go to TCBeerFest.com or visit festival on facebook. Tickets are available now at MyNorthTickets.com.