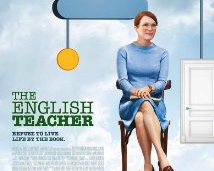 Traverse City Film Festival: Though Craig Zisk is a first-time feature film director, he's no stranger to the camera. Zisk has produced numbers of TV hits including Weeds, United States of Tara and The Larry Sanders Show. You might also recognize a few other series under his direction like The Office, Parks and Recreation and Nip/Tuck to name a few. In his latest project The English Teacher, high school educator Linda Sinclair (Julianne Moore) enlists the help of the drama department to launch the play of a former student/recent strikeout in the NYC playwright scene. We're catching The English Teacher at the 2013 Traverse City Film Festival, so we gave Zisk a call to chat about the film.

We hear this is your first time directing a feature film, congratulations! Tell us why you chose The English Teacher as your first.

I had been reading feature scripts for about 5 or 6 years while considering to give it a shot… But nothing grabbed me like the TV shows I was currently working on. I knew it would be a big step transitioning into film, so I wanted to make sure it was the right project. I wanted a home run. Finally when I first read the script for The English Teacher, I just knew right away. It spoke to me, it was a subject I loved, and the writing was so unique. There was a clear opportunity for great parts and strong characters and I gravitate toward that.

Well it doesn't hurt having strong talent to play those strong characters either! What was your casting process like?

Like any industry, there’s a business side of things. And the first time I met with the producers they asked So who do you see playing the cast? Right away I thought Julianne Moore for the lead. When the producers agreed, we sent Julianne the script, and a month later she told us she loved it. I mean how often does that happen? For new directors like me to approach this big name talent, and get my first choice? It’s all been a blessing.

Tell us about some of the themes audiences can anticipate when watching the movie.

There are big themes of transformation. And with that, there's the question Can we really change? Linda goes through a lot of transformation, we’re talking high highs to the very bottom dip of the roller coaster. But then we also bring up the theme of compromise and consciously making a choice to do what is right. I think it’s all very relatable, and I think the audience will too.

And what about this setting of high school and the drama department? Can you relate to that?

Well I mean, I’ve never acted outside of what I did in high school—which was a lot behind the scenes—but I love that the high school theatre culture is part of the movie. I’ve experienced it and I think most people can say they were either somehow involved in that scene or knew a person who was. It’s fun to have that connection.

I know some actors refuse to watch their own work, but do you watch yours? Have you seen the complete production?

Oh just a couple hundred times. It’s a small independent movie and I was right there in the editing room for 6 months getting it to where we wanted. But by far, my favorite way to enjoy it is while watching with an audience. I love to see how they react because every audience catches different things. Really, when I do have the opportunity to watch with a group, I tend to watch them more than the movie. I was really disappointed I couldn't get to Traverse City and watch with everyone.

Well better start on that second film and come back for the festival! But we have to ask, has the directing process tainted movie viewing for you?

Honestly, it’s the exact opposite! I’m much less critical, I understand the process better than I did before and I can see now, first-hand, just how truly different it is than making TV. Both are difficult but so different. The amount of love, tears and fear that go into a featured film is all an incredible amount of effort and emotion. I’d say I’m very sympathetic now with what a director goes through. And yeah, of course I might not like a movie, but these days I’m just cheering on the director, thinking Good for you, buddy.

Now having experienced both sides, do you think you’ll stick to directing film or TV more than the other?

I’m sticking with both, for sure. Right now I’m back into TV shooting a new comedy called Brooklyn Nine-Nine. It’s by the same producers and writers of Parks and Recreation, so really fun content to work with. And to put it into perspective, the episode we’re shooting today will air on September 3. It’s an immediate and invigorating process. For The English Teacher, I first read the script in October of 2010. It’s amazing, but definitely a longer journey.

As we're sending festival goers to check out The English Teacher, what's your favorite scene you want them to look out for?

There are a few of them but the top is probably when Linda (Julianne Moore) and the drama teacher (Nate Lane) present their case for the play to the school administration. The principal and vice principal are played by big time Broadway stars Jessica Hecht and Norbert Leo Butz. So that in itself is hilarious. But I remember sitting on set, watching the scene come together and rolling through all the awards in front of me—Tonys, Golden Globes, Emmys—we had the most incredible talent on our set. It was one of those moments as a director that I could sit back, enjoy it all and giggle at the monitors. I think that's what audiences will feel in the movie too.

Catch up on all the latest at the Traverse City Film Festival.
X
X