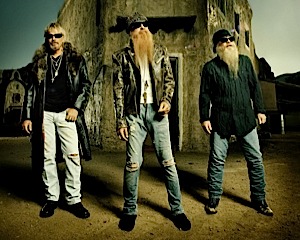 Northern Michigan Music: We sit down with Billy Gibbons of ZZ Top and chat about their upcoming performance at Interlochen August 8. 2013. For tickets, call 231.276.7800 or visit interlochen.tickets.org

Like the Stones, Deep Purple, Yes, Jethro Tull and precious few others, ZZ Top has been around since the 60s. What keeps the band going?

Well, for starters … that's some good company…! The distinguishing element is that ZZ remains the same 3 guys since the beginning. The mystery quotient is that this arrangement sure beats working.

You have one thing over all those bands as yours is the only group that’s been around that long with the same personnel. How is that possible?

It's worth noting that we like what we get to do and we like doing it with, as we always say, “same three guys, the same three chords.” We like having a good time and we certainly like keepin’ on keepin’ on.

You have been involved in some extra-curricular activities, including acting (I remember the scene with all the guitarists auditioning for the band in The Drew Carey Show, and of course your recurring role in Bones), playing with other musicians (from Everlast to Conan O’Brien’s last Tonight Show to Late Show bassist Will Lee’s new album), and your barbecue prowess. How do those opportunities come about, and do they ever conflict with your responsibilities in the band?

Well, the Bones bit started as an idea by Hart Hanson, the gent who created the show. And it was Hart who designed having a character to act as the father of Angela Montenegro, played by Michaela Conlin, who would be a bearded guitar slinger. I wonder who he had in mind? At any rate, the call came in and we passed the audition. The other stuff just pops up organically. If we like the idea and we've got the time, it's done. (NOTE: Billy was too kind to mention that it was actually Dusty Hill who appeared on Drew Carey.)

Do you still maintain friendships or musical relationships with any of the musicians from your early days in Texas like Edgar and Johnny Winter, GG Shinn (onetime lead singer of Chase), or Jerry LaCroix (from Edgar Winter’s White Trash and Blood, Sweat & Tears)?

We appeared with Johnny and Edgar recently which was a kick. Even got to play a fresh searing solo for Johnny's upcoming release to rip it up a bit. The Boogie Kings, GG Shinn, and of course, Jerry's band remains top of the list. (The Boogie Kings were a popular Cajun/swamp pop band which featured both Shinn and LaCroix).

The band originally focused on the classic power trio sound, filtered through your Texas boogie background. Then you added 80's elements like sequencers, synths and digital drums/reverb. How has that affected the band’s live sound? Along those same lines, have you ever considered expanding the band, adding horns or keyboards?

We like the trio format—keeps things simple and gives us a chance to do work overtime. We added horns on a couple numbers on the Warner Bros. debut disc, "Deguello" that required some rapid rehearsing on the brass. "The Lone Wolf Horns" were born…! And, new ground broke as we invited Hammond B3 genius Mike Flanigin and guitar slinger Van Wilks to make way from Austin to Switzerland for a special appearance at the Montreux Jazz Fest. The “ZZ Three” became “The Fat Top Five” for a prize tribute to Jazz Fest founder, Claude Nobs, a great friend and supporter of our band.

You built up steadily through your first decade to hit so hard with Eliminator. How did that disc become such a hit? Did that set a template for what fans expected?

We laid the base by touring our brains out chasing our most popular singles like “LaGrange” and “Tush” and consequently, folks embraced Eliminator with open minds. Add the taste of the videos with our pretty girls and that shiny red car and it was off to the races …!

What do fans expect from a ZZ Top show these days? From a ZZ Top recording? And what do you give them?

It's all about a good time, pure and simple. Our bunch wants it nice and loud making for a party all way ’round. This band is always looking for a fresh twist to them blues. So much the better! Now let's rock…!