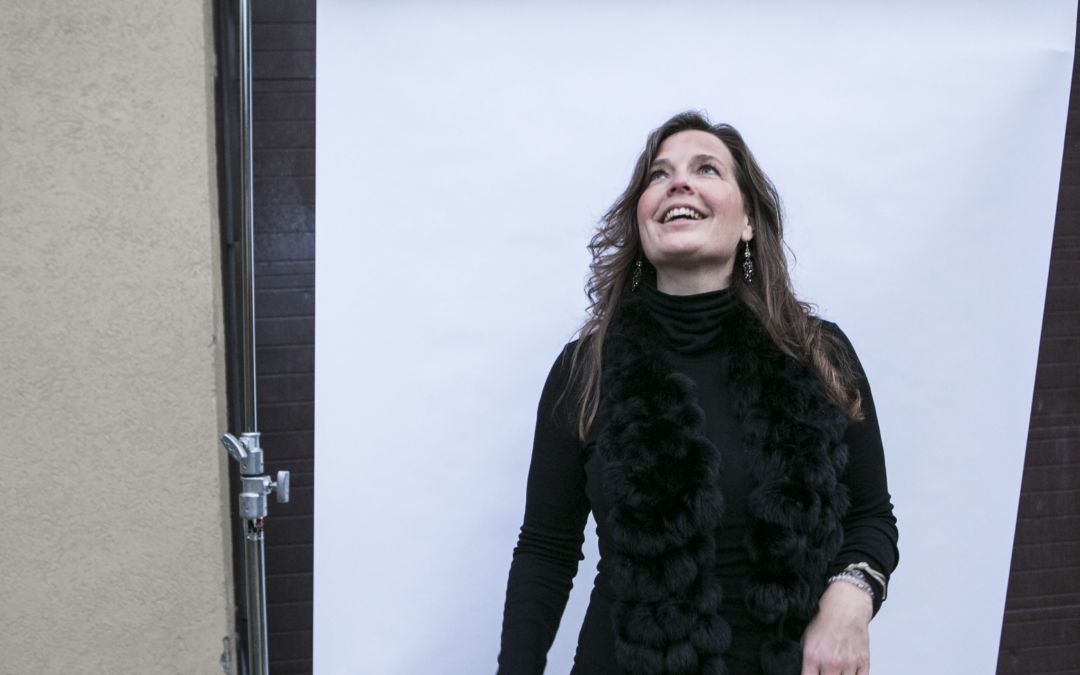 The first time I met Mary Stewart Adams, we were weeding a carrot bed. Dirt lined the creases of her fingers. Her eyes never left a neat row of intricate greens, pulling and tending with equal care. But even then, when Adams could not have been more connected to the Earth, her head was firmly planted in the clouds. She spoke of the moon, stars, constellations, comets, planets. She explained the necessity for darkness, the importance of seeing and soaking in celestial stories.

“Someday, we’ll have a protected place for night sky viewing,” she said, wiping a streak of soil from her cheek. “We need to reconnect with the stars. I want to help make this happen, not just as a hobby. I’m working toward making it my career.”

I remember it clearly because while she spoke, I kept picturing her as an untethered helium balloon, floating on the wind.

A decade has passed since we first worked alongside each other at a small farm in Petoskey. Now, we’re sitting in a downtown Harbor Springs coffee shop, talking about how she turned her dreams into reality, as the director of Emmet County’s International Dark Sky Park.

“Most people just politely nodded,” Adams says with a laugh, remembering when the park was only a glimmer. “I was raising four kids, trying to make it all work. I know it sounds out there, but I’ve known all along what I was supposed to do with my life.

“Plus,” she smiles, “I’m stubborn, educated, and ambitious. I had a single-mindedness about what I was doing, and never stopped believing everyone would eventually get on board. I mean, who doesn’t love the stars?”

Her success could be a result of her unwavering conviction. It might be proof a person can manifest their own destiny. Or perhaps, Adams tapped into a deep truth within all of us, a desire to be connected to something as mysterious and ancient as the heavens. No matter how it happened, one thing is clear: Adams put Emmet County on the map as one of the best places for stargazing on the planet.

“I planted star seeds everywhere,” she says, lifting a hand up and sprinkling imaginary dust across the table. “I kept thinking, If enough people hear me speak, I’ll be able to make this happen. Eventually, these ideas began to sprout into realities.”

In 2009, Adams—who by then had established herself as an expert in star lore—joined forces with a handful of other folks concerned about light pollution in the night sky. Eventually, she went to the Emmet County Board of Commissioners with a bold plan: to formally designate the Headlands, a 600-acre county-owned parcel on the shore of Lake Michigan near Mackinaw City, as an International Dark Sky Park.

By 2011, the Headlands was awarded a “high silver tier” designation by the International Dark Sky Association, becoming one of only 10 designated dark sky parks in the world. This was an enormous commitment on the part of Emmet County, reflecting an intensive application process to meet and exceed guidelines for lighting ordinances, community outreach, and more, all geared toward preservation of a pristine nighttime environment.

“It’s a quality-of-life issue, to be able to have access to a truly dark sky. There are anywhere between 7,000 and 10,000 objects to see at night with the naked eye. That’s what we wanted most, to provide a place where people know they can come and gaze up and be connected.”

Establishing a protected nocturnal habitat was only the beginning for Adams. She says ever since age 18, when she found astrological studies as a way to make sense of the rhythms in her own life, she’s felt called to learn and teach the cultural connections between Earth, sky and people.

“Ancient cultures have a wisdom we don’t have anymore, a story about the unfolding human biography, a story of place. Part of my dream has always been to have a spot to story-tell about the stars,” she says, pulling a pile of well-worn, dustjacket-less books from her bag.

Science has evolved the way we view the night sky, Adams adds, noting technology makes it possible to see some 9 million objects in the sky. It’s a far cry from what was visible during the time mythology ruled discussions about what went on in the heavens.

“It’s a huge leap, and for the most part, scientists, not poets or artists, are now our storytellers. I think it’s part of my job to speak on behalf of ‘once upon a time.’ ”

To keep from being written off as too out there, or just plain weird, Adams has strived to ground her world of star stories with credibility. She’s won awards like Environmentalist of the Year from the Northern Michigan Environmental Action Council, has been invited to speak at international conferences, and is a hit with state-level tourism experts. She also received a grant from the Michigan Humanities Council, with support from the Emmet County Board of Commissioners, to help build a one-mile paved Dark Sky Discovery Trail at the Headlands.

The Discovery Trail isn’t about the hard science of planetary study. Instead, it’s a collection of cultural docents, indigenous artwork, and regional photography, all geared toward interpreting humanity’s relationship to what exists above this world.

“Astronomy is the mythology of our time. We need to safeguard the human imagination, to recognize the importance of having a space to just dream and get scared and lost, and then, find our way,” Adams says, opening one of the books she’s stacked beside her. It’s been read so many times, the spine slides loose from its pages.

“Fairy tales,” Adams says, her voice taking on the cadence of lake water lapping against shoreline, “are not just make believe. There is a wisdom in true fairy tales, a morality. There’s a reason Einstein said, ‘If you want your children to be smart, read them fairy tales.’ New ideas come from them, but they also carry a prophetic quality. We can get really technical about the night sky, but much of what we do at the Headlands isn’t geared toward scientific questions. We identify constellations, not just to connect the dots of stars in the sky, but to tell their tales. Stars were the first storytellers.”

The 2013 Headlands Dark Sky programs are rich with celestial happenings and tales to go with them. From the story of the “grand sextile” (a rare configuration involving seven planets), to the astronomy of the Great Lakes, to learning about how indigenous cultures practiced naming full moons each month, every monthly program is geared toward contextualizing naked-eye viewing, although binoculars and telescopes are welcome.

It’s worth the trip to the northern Emmet County park just to hear Adams tell a story—sometimes wearing a cloak, and always in the rhythmic tone of a true tale-spinner. Listening to Adams is like being transported to a different space and time, or at the very least, like floating away for a short while.

“It’s important to be mindful, to remember we are still connected to this place even as we explore the stars,” Adams says of one purpose behind her storytelling rituals. “There is a rich history in Northern Michigan, and we become part of that story when we open up to natural wisdom and rhythms of the sky, while keeping ourselves firmly planted in the here and now.”

Coming back to the present moment is a cinch at the Headlands, a vast natural playground with easy access to dark sky viewing areas. While events are extremely popular, a nighttime visit to the Headlands can happen whenever—the park is open 24 hours a day, every day, at no charge—and it boasts 4.5 miles of year-round trails, plus a self-guided cell phone tour detailing points of interest.

Most of all, however, it offers a chance to fully witness what happens after the sun slips into Lake Michigan. Sitting on the beach at the Headlands, there’s no need to speak stories out loud. The old-growth forest becomes a watchful shadow in the background. Stones, smooth from eons of waves, grow warm when palmed. A watery horizon creates a second sky.

“We are made of star stuff,” Adams says of what makes having a dark sky park so important. “When we started talking about this, when we let stars take center stage, the community showed up. The people in this incredibly special place in Northern Michigan, they get it. We all understand how restorative it is to be on the beach, and sit on the ground, and wait for the stars. You know they are there long before you can see them. All of a sudden, they appear, like magic. To touch that moment, it’s a sacred experience, and we can access it every single day.”