Finding Dark Amid the Light, an Essay 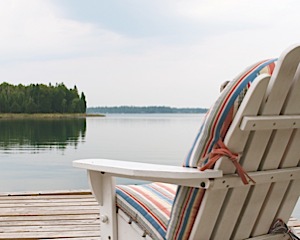 There are small reasons for living in the North Country. Reasons that can’t be itemized and checked off a list. Like the morning I found myself terribly unhappy for unknown reasons. Probably hormonal. Probably genetic. Probably just a bad day. But there I was, standing beside the small lake where I live, wallowing in self-pity, which turned into pity for anything and everything around me.

Poor lake. It had been going down year after year for five years. Global warming. Fracking. A large, natural cycle. It could be anything, I’d been told. But now I was afraid it would disappear completely. The sandy beach was wide, lovely, but the swimming place all mucky from old vegetation. Other terrible things were happening everywhere around me. And I’d come North for peace and quiet and absence of stress.

Now my pond, beyond the house, was gone—dried up, the long mystery of what lay beneath all that water was finally solved—nothing. And I’d pictured sunken treasure; at least a hidden underground cavern. The beaver that plagued the trees around the pond was gone. The otters were gone. The spinning logs that used to crisscross the pond, always filled with elbowing turtles—all gone.

But it was a glorious morning. Nothing wrong in that quarter. I couldn’t ice up the warm wind out of the south to suit my mood. I couldn’t darken the clear sky, nor quiet the sparkling waves at the shore.

So I sat and looked at nothing. And saw nothing. I wanted no thoughts beyond that moment. I instructed myself to see only what was wrong with my world and called it “honesty.”

But blindness isn’t always permanent. I had to notice that the end of the dock was underwater. The lake had come up.

I told myself not to count on it. It would go back down. Sand islands would rise. Boating would be treacherous, swimming impossible. Maybe it would rain all summer. There would be snow on the 4th of July.

In the water washing over the end of the dock, half-floating on a passing wave, two painted turtles clung to the boards. From time to time the turtles lost their foothold and had to clamber back up—clumsy, lumbering little shell-bound beings that didn’t seem to have a care in the world beyond sunning themselves on a wet dock. Silly things. They could have been worrying about air pollution or some threatening dictator or at least a terrible winter ahead.

I watched as a third turtle tried to climb up and, time after time, was swept away, only to stick that little round head up again, waiting for his moment.

I couldn’t help laughing at him and his brethren. His misery even gave me pleasure. I had a checkered past with turtles.

Always the good Samaritan, on the way to giving a talk in Northport, I once had stopped to rescue a box turtle making his slow and probably suicidal way across the road. In my fancy dress and high heels, I picked him up to carry to the other side of the road. But turtles have no conception of kindness. He was probably scared I had a pot of boiling water in mind and started to pee. He peed on my shoes and down the front of my dress. I had no idea if turtle pee had a smell to it, but I had to go on to my talk as I was. Strike one against turtles.

My next rescue mission turned out to be a snapping turtle. I tried to ease him from behind across the road, and that incredibly long neck came back around and almost got me. I knew I had a fearsome creature in hand but still couldn’t give up on the rescue. After all, what would I think of myself if I abandoned him for fear I’d lose a finger or two?

I pushed him from behind. That head snapped around, left and right. I put my hands on the very back of his shell where I knew he couldn’t get me, and pushed him—snapping and complaining—to the side of the road and later proudly mentioned my rescue on Facebook, only to be told I should have taken my floor mat out and somehow gotten him on to that then pulled him from the road. Monday morning quarterbacks always make me want to snap and hiss.

Still watching the turtles, I got up to pick a piece of paper from the water. A frog jumped up at me—a high, arcing trajectory that surprised both me and her and made me happy because I remembered that what I call the “frog jamboree” was only days away. A terrible day to witness—licentiousness and wantonness as the frogs gather at the edge of the lake—just this one day every year—to carouse and mate indiscriminately. They sing and leap and carry on but the next morning are always back to frog business. No hangovers. No change in schedules. Frogs are very efficient in dealing with the exigencies of life.

Two crows in a nearby aspen watched me and cawed hoarse cries, talking to each other above my head as if I weren’t there. As if I didn’t know they were talking about me.

I felt aligned with the world. And happy for that moment.

Elizabeth Buzzelli writes from the woods between Leetsville and Mancelona. Her newest novel, Dead Little Dolly, is the fifth in the Emily Kincaid mystery series and is available at bookstores and on the web. ebuzzelli@aol.com