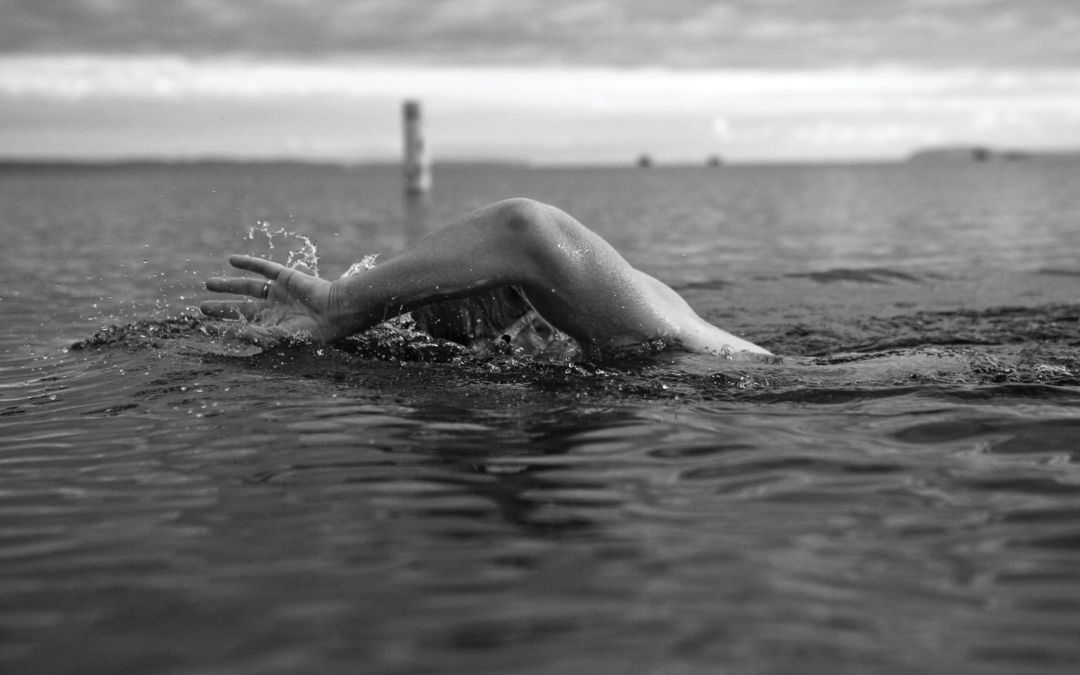 It’s hard to say when I started swimming like my life depended on it. I know it wasn’t when I was 10, a camper at a Michigan Bible camp my grandmother had paid for, and which I eagerly agreed to attend, without either of us knowing that I would be “saved” that summer. It was not pleasant. The counselor kept pressuring me to “accept Jesus Christ as my personal savior,” and finally, crying, unable to tell him to shut up, I did. And he shut up. I felt incredibly lighter all of sudden. I didn’t know if it was because Jesus himself was now helping me along, or if because the kidnapping-like experience of being trapped by the counselor until I surrendered was finally over. Still, many times since then I’ve wondered if that time “counted.” I’ve never stolen anything or gotten more than one speeding ticket—boring, yes. I have been greedy, selfish, lazy, things most of us try to avoid and usually can’t. And when I start to feel lousy or sluggish, I go swimming. I wish I could say that swimming has made my whole life better. But it hasn’t. It makes those 45 minutes I’m in the water better. And sometimes, if I’m lucky, this calmness carries through the day. I can stop while crossing the street or while answering another ridiculous email sent by someone who won’t or can’t do their job, which means I have to do it for them, I’ll stop and think about swimming, and I’ll swear that I feel again like I’ve just stepped from the water, and I’ll go on.

I swim alone. Usually in the morning, about 7:30, before the day's begun. Before the rest of the claptrap that will clutter the day has begun. Swimming any later in the day, from a crowded beach, under bright sun, while, I guess, the whole word is watching, seems beside the point. I swim to find a quieter, cooler room within the brighter room that is the ever-busier day. Wearing flip-flops, faded swimming trunks, and the same blue shirt every day, I ride my bike to the swimming beach, a guy eagerly pedaling down the road, a towel stuffed in the bike’s basket, his blue swim goggles flopping over the edge of basket, craning around, looking around—eagerly.

"Just start swimming, and somehow, as if by magic, stay afloat."

It’s the ritual I love of this morning swimming. I can’t stand to deviate from it. I practically have no other rituals in my life, things I do every day, except swimming. I can’t wait to round the last curve in the bike trail, dip down the slight incline, and coast in toward a metal pole with a sign atop that reads: “No Smoking or Feeding Of Ducks Allowed.” This seems an affront. It seems like there shouldn’t be any rules at the beach, except the law of gravity: sink or swim. But I know we live in a civil society whose grease, which keeps all things running smoothly, is rules. I’ve been in places where there are no rules except the law of the gun, like a war zone, and I didn’t like that either. We all live together, for better or worse, and we need rules. But out on the water, as a swimmer, there aren’t many of them, and that’s why I like it out there, where the water’s deep. Just start swimming, and somehow, as if by magic, stay afloat. It’s a mystery to me how we or why we can float. Something to do with body mass and body fat and air in the lungs … I don’t understand, maybe I don’t want to. I want to know only that it can happen.

Out on the water, I meet other people who seem to have the same idea as I do, swimmers in white rubber caps gliding effortlessly along the buoys, often wearing wetsuits, which make them glide faster than I do. My heart always sinks when I see them, spot their inky splashes from a distance as I approach the beach. It’s funny, I know—I mean, it’s not like we don’t have an entire lake to share. Sometimes they want to know if I want to join their group. I don’t. This would ruin everything—the privacy, the odd sight of my own gangly shadow racing over the sesame-colored bottom.

"Just dive. Surrender. Be saved by your own body magically floating."

I walk out from the shore, ankle-deep, knee-deep, crotch-deep—it feels like I am actually putting on a new skin—and up come the eager goggles, the snap of their elastic band around the back of my head—and I dive. No monkeying around: Just dive. Surrender. Be saved by your own body magically floating.

Often, as I’m swimming, what I think I’m really doing is taking a walk along the top of the water, belly-down, with an imaginary lover. The water of the lake is like a body you get to know over time. The water changes as the sunlight dims. The surface of the water can resemble the color in someone’s eyes whom you love, and depending on the way the light hits those eyes, they can glint—tiny flecks of amber flaring—or fill with a gray, bottomless look that is as quiet as the sea floor. I swim to meet this imaginary person.

First the right arm comes up and extends and drops in the water, and the right hand cups and turns and feathers and seems otherworldly, like it’s not yours, and it moves along your body, and then falls behind you as the left arm comes up, rises, and drops and your face turns as if drawn by a string tied between your ear and elbow, which is the one thing I learned that summer I was saved when I was 11. The counselor had said: Imagine a string from your elbow to your ear and as your elbow comes up it draws your face up to the air, eyes streaming … Swimming is monotonous, repetitive, meditative; a gorgeous silence drips down the back of your throat. It’s like praying with your eyes open. I can’t sit for more than five minutes on a meditation cushion or a church pew, but I can swim for 45 minutes, rain or shine, seven days a week, along the shore. I can’t pray, but I can swim. I don’t understand this. I use the time while swimming to think about these questions. Or, rather, the questions rush in to fill the solitude that is swimming.

Ironically, though, when the swimming is its most enjoyable, my mind doesn’t wander to these questions—I don’t wander from the task literally at hand: the challenge of cupping the water just so, the satisfying gulps of air as the elbow pulls my face to the light—my feet fluttering in rhythm. But still I do wonder: what does it mean to be a good person, what does it mean to forgive someone, to be forgiven? What does it mean to be “saved” from drowning, saved by one’s own body, which seems to float by magic, all on its own?

Doug Stanton is a best-selling author and founder of the National Writers Series. His most recent book, Horse Soldiers, explores a dramatic military mission in the early days of the Afghanistan war. Stanton writes from Traverse City.