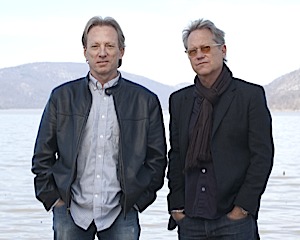 Northern Michigan Entertainment: Like many of their contemporaries, Gerry Beckley and Dewey Bunnell of America continue to perform their hits for those who remember them from “back when.” In the case of America, the “when” is the early to mid-70s, when songs like “Tin Man,” “Horse With No Name,” and “Sister Golden Hair” ruled the airwaves alongside songs by the likes of the Doobie Brothers, the Eagles, James Taylor and others.

But Beckley and Bunnell still create new music as well. Not only did they release a new album with contemporary stars in 2007, one of the most popular tunes of recent vintage is the newest offering from Chicago. “Somethin’ Comin’, I Know,” was written by Chicago vocalist/keyboardist Robert Lamm and his pal, Gerry Beckley. (The two released an album together with Beach Boy Carl Wilson in 2000.) “It’s the most downloaded Chicago song, even more than their old hits,” Beckley said Lamm told him.

Like Chicago, America still tours regularly. Beckley says the crowds are excited to hear the songs they made popular as well as newer ones. “We do about a hundred shows a year,” said Beckley. “But to do that, we need to have a hundred offers a year. It’s a business.” For proof, America’s performance August 17 at Northern Michigan’s Little River Casino, in Manistee, is sold out.

Beckley and Bunnell don’t take that success for granted. They’re grateful to their fans and say the opportunity to perform is rewarding. “It’s a pretty cool way to make a living,” said Beckley.

Beckley says the constant travel does become a grind. “The songs are when we relax,” he said. Told that Mark Volman of the Turtles said much the same thing, Beckley readily agreed. Then he mentioned that he’s a regular guest lecturer for a music course at Loyola Marymount University and at UCLA. “You know, he (Volman) is a friend of mine. And I do a class at Loyola Marymount and UCLA that he actually started.”

The travel notwithstanding, Beckley is thankful for the opportunity to sing and play for appreciative audiences. “The crew comes in at 9 or 10 (in the morning), and then they’re there till midnight. It’s easy to show up and get the accolades.”

Beckley takes pride in the group’s continued success, but says the affection for the band’s hits is based on more than just the fact they are well-written and performed songs. “When you’re 12 to 20, your ears are a little more perceptive,” he said. “Music is a powerful medium. It triggers emotions and feelings.” And being able to relive those emotions by hearing the songs from that era is what brings in the crowds.

Beckley says he still maintains interest in current music. “I’m a huge fan of Wilco,” he said, while also praising Icelandic band Sigur Ros and the recordings of its frontman, Jónsi Birgisson. Beckley also points to the changes in the music industry, with the lack of major labels promoting bands, making it more important for artists to utilize all the methods of exposure they can. “Daft Punk gets attention from every platform,” he noted.

It’s a safe bet that when Beckley, Bunnell and the late Dan Peek formed America in 1970 they weren’t worried about platforms. The three sons of American fathers in the Armed Services and British mothers, they met at school in London. Bunnell’s tune “Desert Song” became a hit with its new name, “A Horse with No Name,” followed by Beckley’s “I Need You,” making their debut album a huge success.

Homecoming followed suit, and when the next album, Hat Trick, stalled, America enlisted the services of famed producer George Martin. Holiday featured the hits “Tin Man” and “Lonely People.” By 1977 Peek had had enough, and left the group for a solo career. While there were occasional calls from fans and labels for the three to reunite, apart from brief appearances on one another’s albums and a short set onstage in 1983, America has been a duo since 77. Peek died in 2011.

But America is still going strong. They recorded for American Grammaphone, the label owned by Chip Davis of Mannheim Steamroller fame, and in 2007 released Here and Now, a double album including material and performances by Adam Schlesinger of the independent rock music group Fountains of Wayne his musical partner, James Iha, formerly of The Smashing Pumpkins. Other guests included Ryan Adams, Ben Kweller, Stephen Bishop, Rusty Young, and members of the groups Nada Surf and My Morning Jacket. The disc of new material was bundled with a second disc of live performances of every track from History: America's Greatest Hits, previously recorded at XM Radio. The release was well received and Here & Now went all the way to number 52 in the Billboard charts.