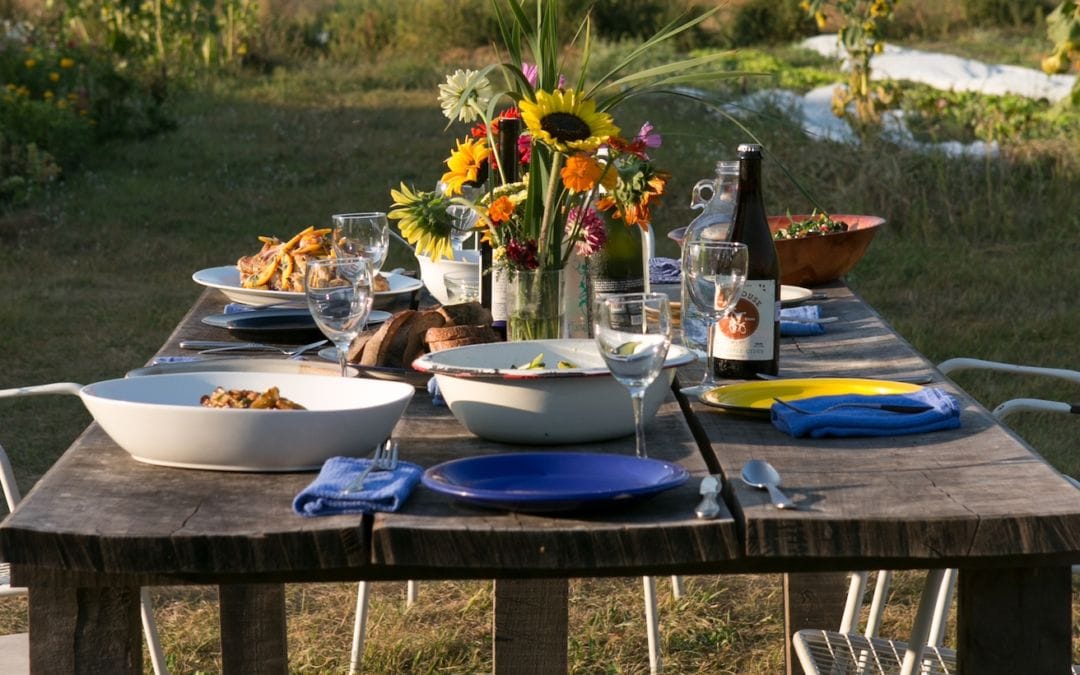 She has been cheffing in some hot Chicago restaurants. He has been growing fab produce on a longtime family farm. Their business, Bare Knuckle Farm, offers a delicious look at the future of food in Northern Michigan.

Poised for the peak of harvest, Northport’s Bare Knuckle Farm realizes the months of relentless blue sky and intermittent rainstorms in the luminescent orange skin of heirloom tomatoes and the red drupes of ripe raspberries. Tousled by a late summer breeze fragrant with the herbs around her, co-owner and chef Abra Berens stands over a rustic farm table and massages sea salt into deep green ribbons of kale, wilts rainbow-veined leaves of Swiss chard under warm barley and tosses sweet summer peaches with shaved red onion and torn handfuls of lemon basil. 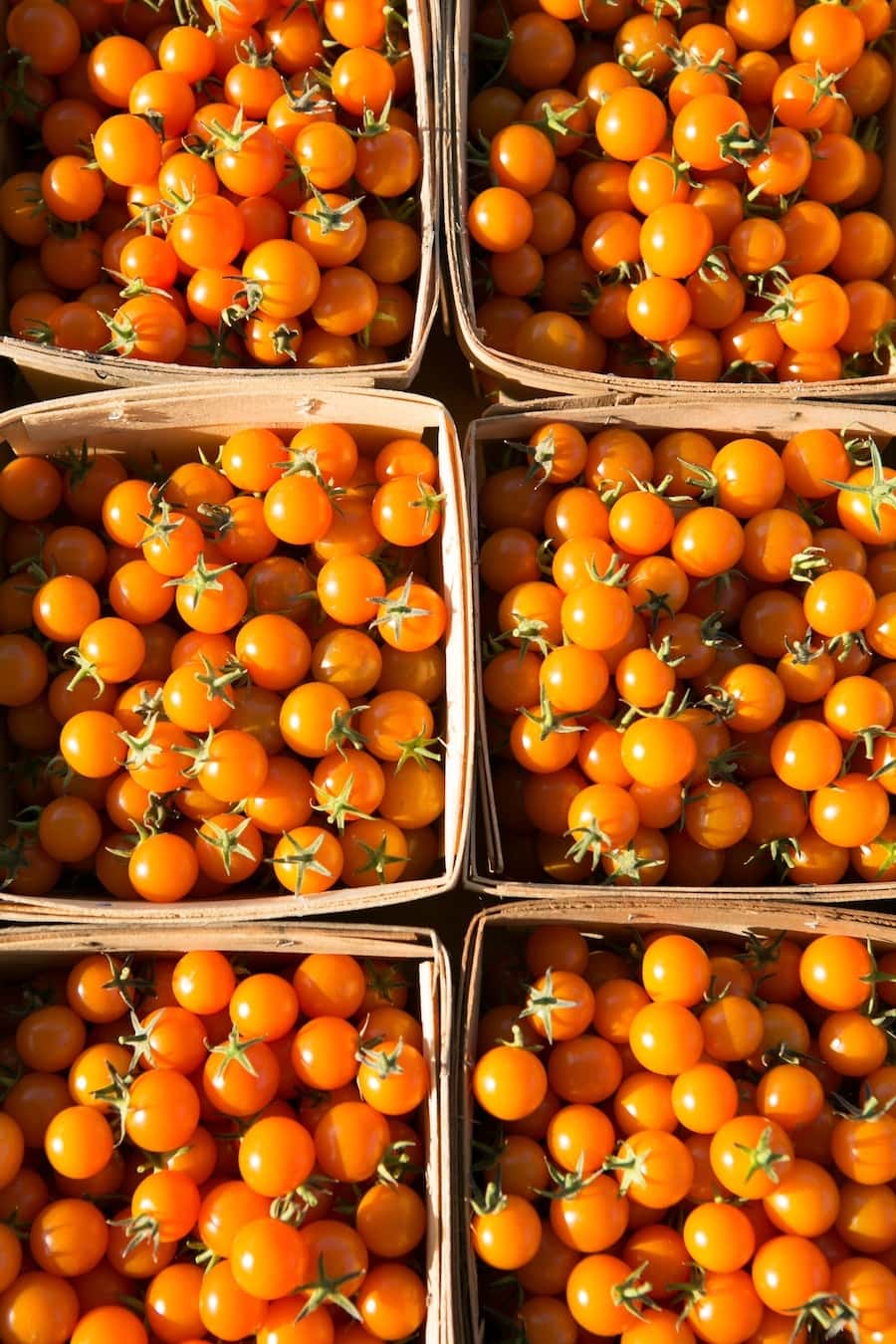 While studying at the University of Michigan in the early aughts, Jess Piskor and Abra Berens found their friendship and the genesis of their inspiration for a full-circle farm-to-fork enterprise while working at the landmark Zingerman’s deli. After college, Berens trained at the Ballymaloe Cookery School in County Cork, Ireland, under the tutelage of slow-food guru Darina Allen, whose ingredient-based philosophy integrating cooking and farming resonated with Berens’s food sensibility. Post-school she cooked at some of Chicago’s most renowned farm-to-plate eateries—Paul Verant’s Vie, the Floriole Bakery. Piskor meanwhile worked at Zingerman’s Cornman Farm, learning small-scale organic agricultural practices that have shaped his strategy at Bare Knuckle.

In 2009, with 2,000 dollars and a new vision of agro-entrepreneurship, the two leased acreage from Piskor’s grandfather in a bucolic valley between cherry orchards on Garthe Road near Northport. Berens and Piskor proceeded to get their hands dirty during the wettest, coldest growing season of the last decade. “That first year was very instructive,” Berens recalls as she bends to pick a striated purple eggplant for dinner. “A lot of our crops failed, and it taught us to be very careful. We planted in April and couldn’t afford to buy a wheelbarrow until September.”

The farm’s second summer produced a bumper crop and Bare Knuckle launched an innovative investor model CSA program. “We followed the traditional model initially but found ourselves creating a lot of custom boxes, and it was hard to adapt good customer service,” Piskor says. “We switched to a program where our members invest up front, receive a bonus percentage and then get to pick what they want from our stands at the farmers markets.”

The funds from their CSA investors, along with volunteer farm labor, helped Bare Knuckle build Yankee House and Dixie House, the farm’s twin hoop houses that extend the viability of sensitive crops like greens and tomatoes. “We can succeed now because of the community,” Piskor says. He pauses to coach one of his farm cats as it scrambles after a sphinx moth. “People in the county have made us part of their lives, and that’s enabled us to keep growing.”

What’s growing are 30 varieties of heirloom tomatoes, hearty greens and salad greens, squashes, eggplant, peppers, root vegetables, apples, aromatics and herbs among others. Last year in lieu of a honeymoon, Piskor and his new wife Michelle asked for help building a greenhouse, which helped the farm mitigate 2013’s cold spring, increase production and plant a vibrant batch of starter crops. Intent on encouraging the natural symbiosis between livestock and produce, the business partners also raise two dozen Duroc Spot Cross hogs that act as natural rototillers in fallow vegetable beds and feed handsomely under the orchards of neighboring organic fruit farmer Gene Garthe before they’re sold whole to local families and CSA investors. Chickens and geese range through the gardens grazing and controlling insects, providing fertilizer and eggs or finding themselves deliciously repurposed as a farm meal.

“We are constantly asking ourselves, How do we take this piece of land and use it completely?” Piskor says of a garden patch that sprouted ecstatically with English peas in the spring. “We can run pigs through here to turn up the ground and let them eat the peas that are too far gone.” 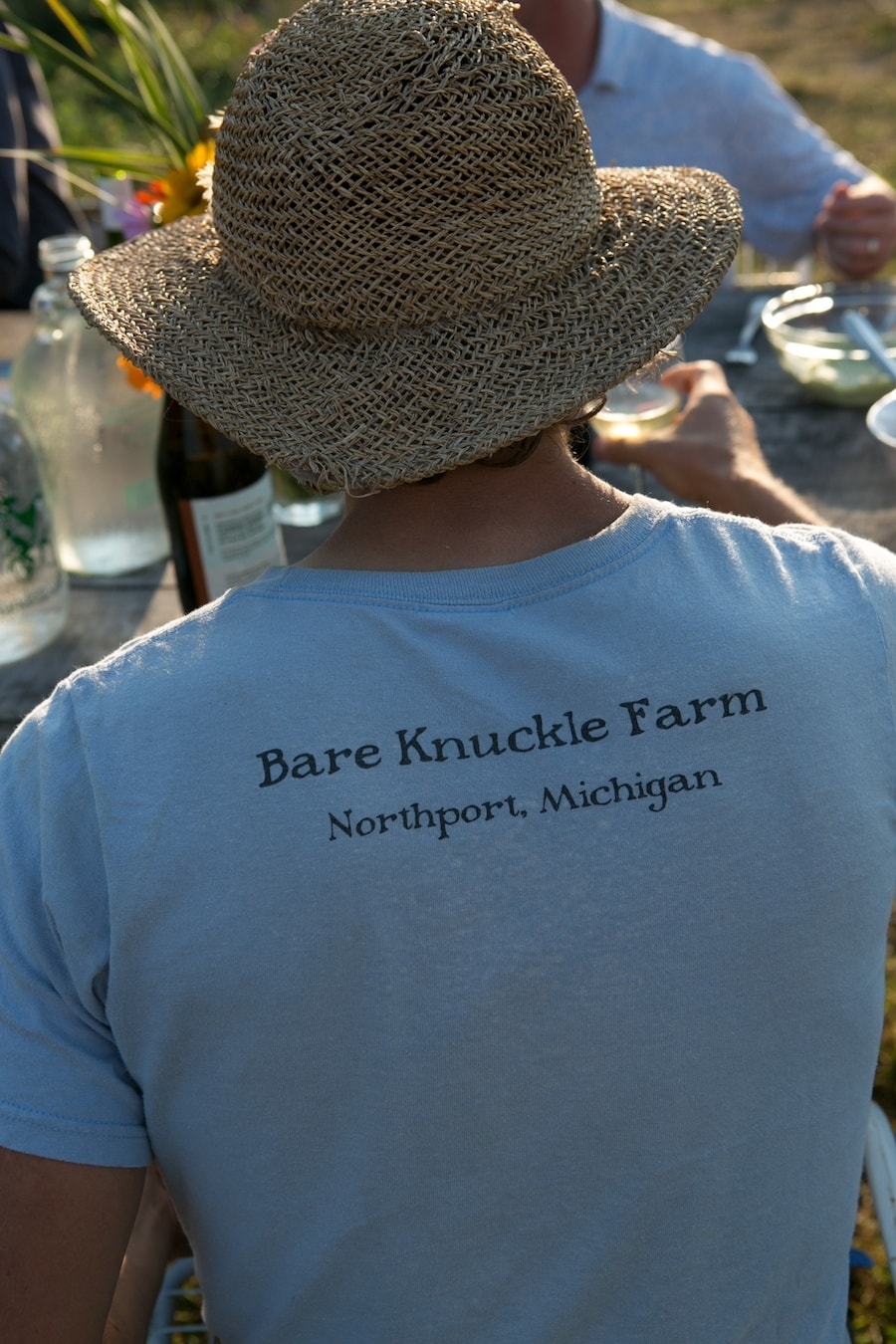 Even as they grow and build a business of farming and cooking, Piskor and Berens see Bare Knuckle Farm as a possible laboratory for the region’s food future. “When we started this project, Jess and I talked about what’s going to help Michigan reinvent itself,” Berens says. She’s carrying a hot platter of pasture-fed chicken just pulled from the farm’s wood grill. “We think agri-tourism is an important part of that. People should want to come to this beautiful place where there’s so much good food.”

Soil and climate never far from his mind, Piskor says, “What is our local terroir? In a hundred years, what kind of food will this region be known for? We struggle with what we can grow and what we should grow. I could plant 20 fig trees, and we might be able to harvest 80 figs every year, but that probably doesn’t make sense.

As Piskor toils the land, finding the balance in growing a compelling spectrum of crops that can thrive in Leelanau County’s compressed growing season, chef Berens finds new ways to manifest the farm in her own kitchen creations. “I want to make food that’s representative of our piece of land and eat what’s best from that land,” she says.

With Piskor’s farm-fresh foods at the heart of her menu, Berens launched Bare Knuckle Farm Dinners for private in-home dining or dinner parties at the farm itself. The style of food is fresh and purposeful, following the arc of the growing season. Prepping for the evening meal, Berens takes in hand a summer squash—presently at its peak—and shaves it on a mandolin for a salad with heirloom tomatoes and fresh herbs. She tosses golden carrots—scorched in a hot oven—with preserves from last summer’s apricots and their toasted kernels. “You hear a lot about nose-to-tail eating but no root-to-flower,” Berens muses, tearing a bunch of purple basil. “The prepared food side of our business is also about minimizing waste. Anything that comes back from the farmers market can be deliciously used right away.”

As the gardens assume the golden August gloaming, Berens sits down with guests to a summer feast: grilled chicken with peach and basil relish, summer squash and tomato salad, roasted carrots and warm barley with Swiss chard. All of it grown steps away from this cherry plank table hand-milled by Berens’s father and bearing the red-gray patina of many such dinners under the summer sun. Reveling in the freshness and immediacy of these flavors dinner guests can’t help but be mindful of the proximity of our food and the land it came from, the tanned faces of the young farmer and chef who saw these tomatoes from seed to salad and are working to grow the vision of feeding their community with purposefully practiced farming and cooking. This is a bare-knuckle engagement between two young agro-entrepreneurs and their piece of earth; each bite reveals that both are winning. 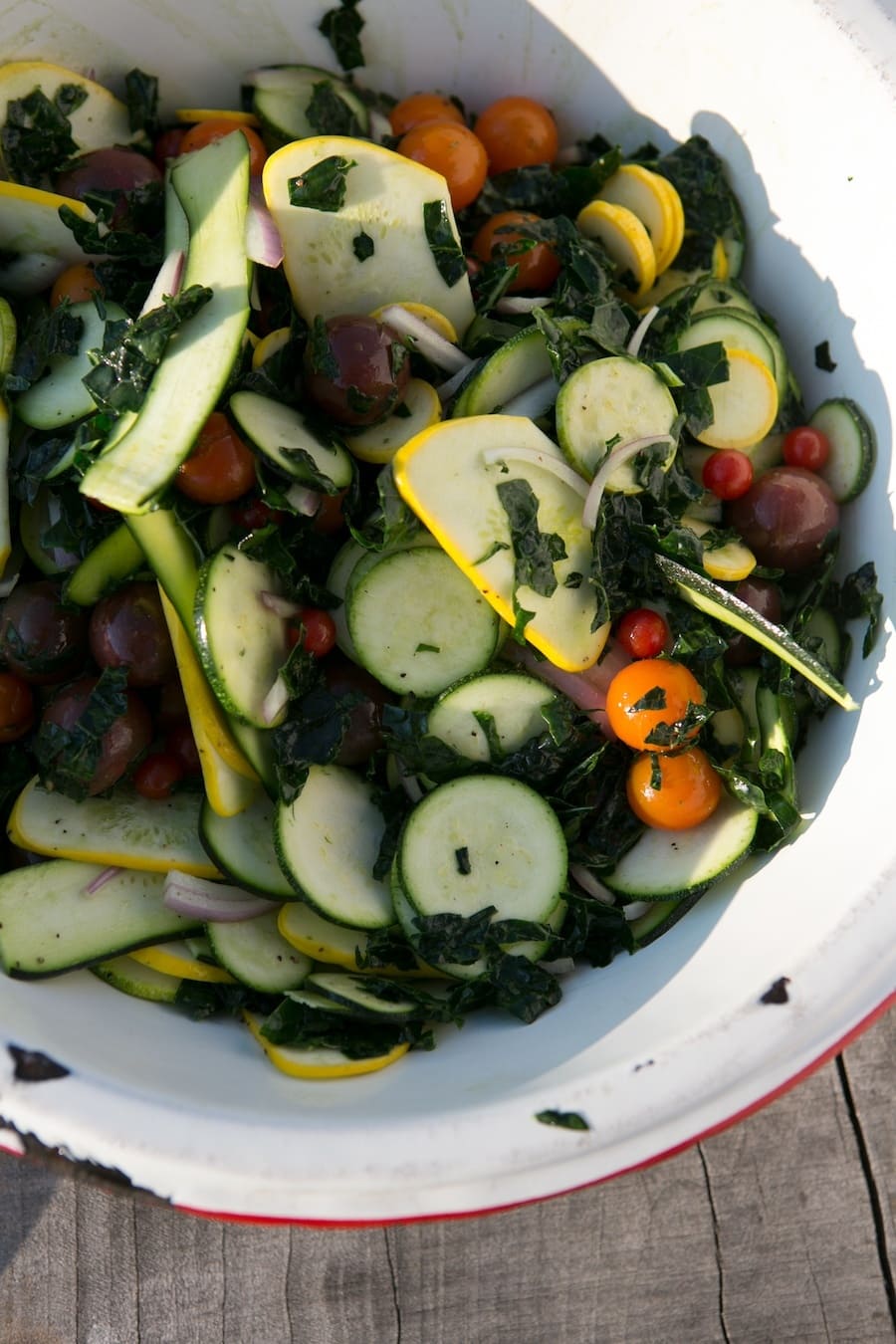 Place cut kale into a large mixing bowl, sprinkle with a generous pinch of salt and massage with your hands until the kale is dark green and tender to the bite, 5–7 minutes. Add remaining ingredients and toss to combine. Season to taste with salt and pepper. 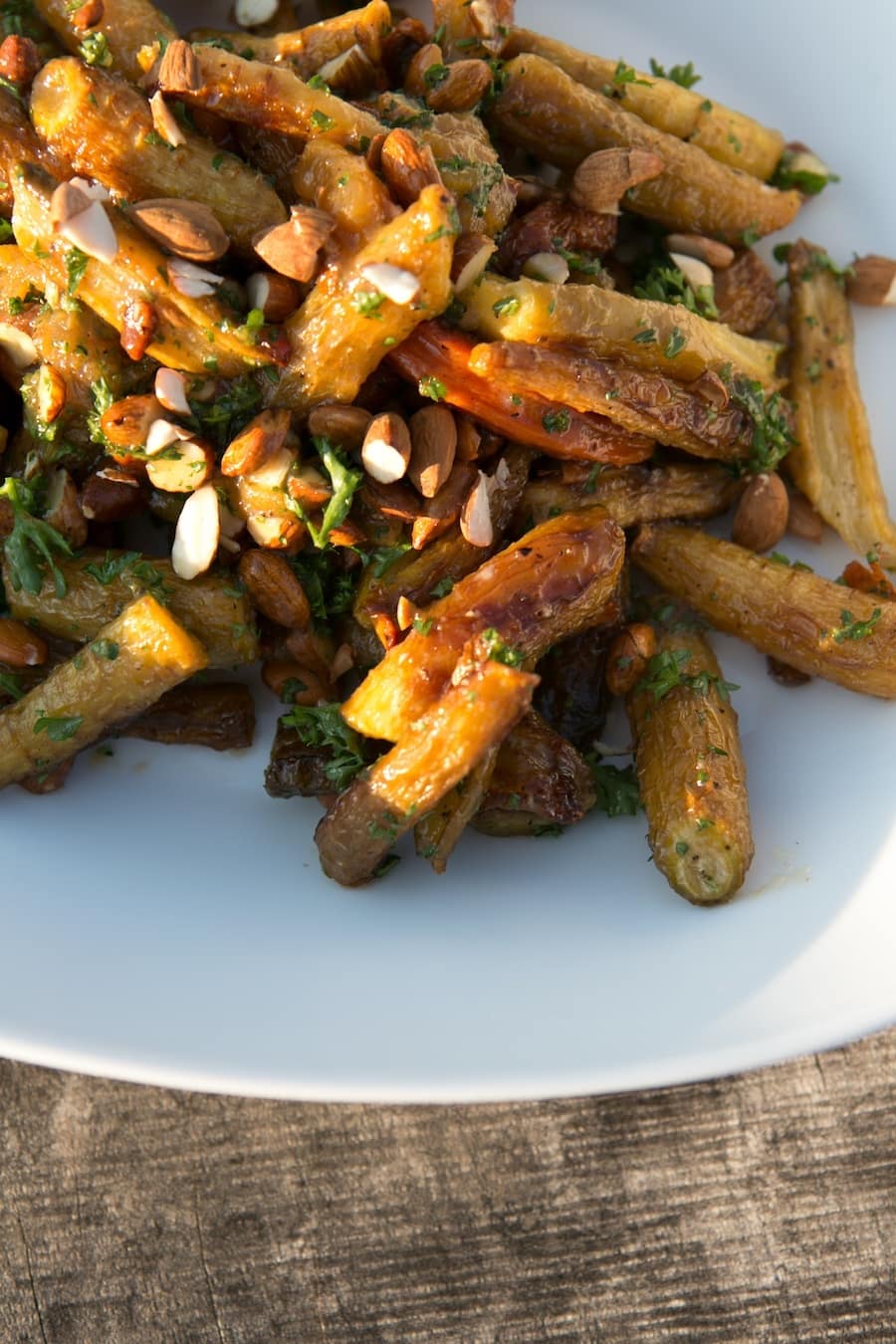 Pre-heat oven to 400 degrees. Spread apricot kernels on a cookie sheet in a single layer and toast until lightly browned and fragrant. Remove apricot kernels from oven, allow to cool, roughly chop and set aside.

In a medium mixing bowl combine carrots and olive oil, season liberally with salt and pepper and toss to coat. Spread carrots onto a cookie sheet, leaving space between the pieces, and roast on the top rack of oven until browned on the outside and tender when pierced with a fork, approximately 25 minutes. In a medium mixing bowl whisk together water and apricot jam. Remove carrots from oven, toss with jam mixture and return to oven for five minutes until the jam starts to caramelize. Remove carrots from oven, transfer to serving platter and garnish with apricot kernels, almonds and parsley.

Add cold buttermilk to a medium mixing bowl and sprinkle in gelatin to bloom.

In a medium saucepan heat combined heavy whipping cream, sugar and maple syrup over medium-low heat until the sugar is dissolved. Add the buttermilk/gelatin mixture and cook until gelatin is completely dissolved. Remove from heat, pour mixture through a fine-mesh strainer and portion into small mason jars. Refrigerate overnight. Remove the panna cotta from the refrigerator and rest at room temperature for one hour. Garnish with summer fruit topping and serve.

In a large mixing bowl combine all ingredients and stand at room temperature for 10 minutes. 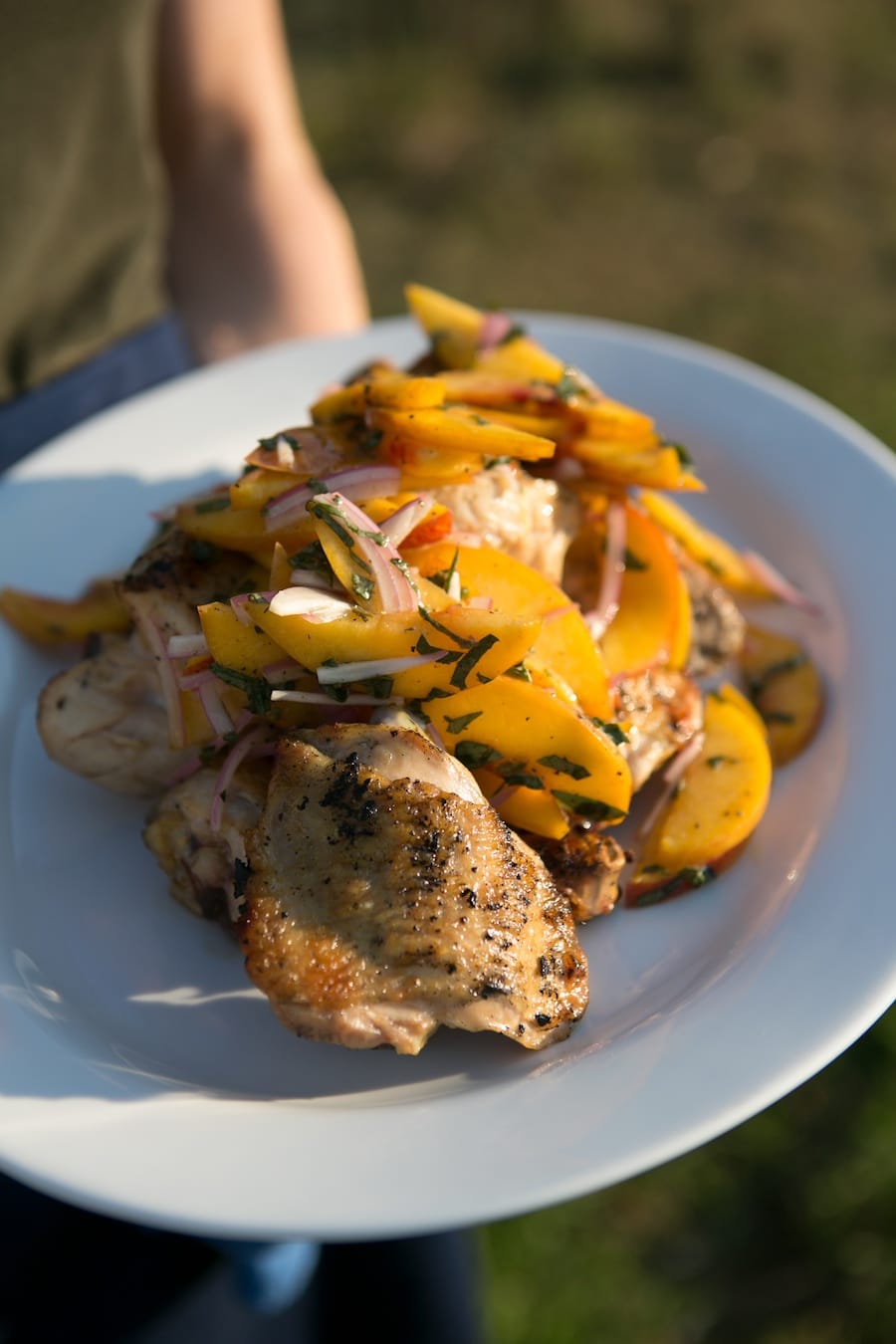 For the peach relish:

In a medium mixing bowl combine peaches, onion, basil, vinegar and olive oil. Season lightly with salt and pepper and toss to combine. Let stand at room temperature for 10 minutes to meld flavors.

Remove chicken from refrigerator, season liberally with salt and pepper and allow it to rest at room temperature for approximately one hour. Pre-heat grill and lightly oil grilling surface. Brush chicken lightly with olive oil and grill over medium-high heat until internal temperature registers 160 degrees and juices run clear. Rest chicken for 10 minutes after cooking, transfer to a serving platter and top with peach relish.

This article is featured in the August 2013 issue of Traverse, Northern Michigan’s Magazine. Get your copy.