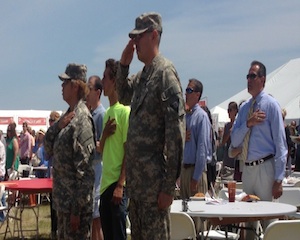 Traverse City honored U.S. servicemen, women and their families at the Heroes’ Day Concert during the 2013 National Cherry Festival on July 1.

Hundreds gathered for an afternoon of American music, enjoying performances from the Northwestern Michigan College Concert Band and the Cherry Capital Men’s Chorus.

“It’s a privilege to be among so many people who have served,” said Chief Warrant Officer 3 Linda Legg-Teeple, noting opportunities to speak with veterans from World War II, the Korean War and the Vietnam War. Legg-Teeple works at Camp Grayling and has served for nearly 20 years.

There are more than 13,000 veterans living in Benzie, Grand Traverse, Leelanau, and Manistee counties, according to a 2013 veteran population report from the U.S. Census Bureau. The Traverse City Veterans Affairs Community Based Outpatient Clinic, opened in 1999, serves nearly 4,000 veterans in the area, said Chief Carrie Seward, public affairs officer of Voluntary Service for VA Health Care.

“We’ve travelled a lot with the military, and so to be here now is such a blessing,” she said. “It was hard to be away from family, but it was also great to be with just our family. I think it breeds a very strong relationship.”

“I feel like I owe thanks to the community more so than they give thanks to us,” he said. “The amount of support we get here in the community is unparalleled. It makes this place a phenomenal place to serve.”