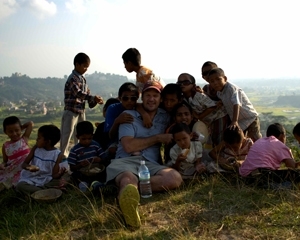 Filmmaker Thomas Morgan sat in a prison in Nepal with Pushpa Basnet last summer, waiting to rescue two young children living behind bars with their incarcerated father, who would spend the next 20 years in prison. Basnet was there to take the children to her childcare center, and Morgan watched as a prison guard approached and challenged her in Nepalese: “Why do you waste your time with these kids?” the man asked. “They’re not going to amount to anything.”

Basnet, 29, a petite Nepalese woman with long dark hair, stood up to the guard and shook her finger in his face.

“She was not for one second afraid,” Morgan said. “You could just see the passion for what she was doing, the importance of what she was doing and of her relentlessness in this cause. It just broke my heart to see these kids come out.”

Morgan, 45, directed “Waiting for Mamu,” a 40-minute documentary that tells Basnet’s story of rescuing children from Nepal’s prisons, where they would otherwise live with their incarcerated parents until the age of 18. The film makes its world premiere at the Traverse City Film Festival 2013 on July 31.

In Nepal, when a parent is sentenced to prison and there is no legal guardian available, the child must live in prison with the parent or survive alone on the streets. Basnet discovered children living behind bars while touring a women’s prison for her university studies in social work. A baby grabbed her shawl during the visit, and Basnet couldn’t forget her smiling face.

Basnet, then 21, established the Early Childhood Development Center in Kathmandu, Nepal in 2005. Working with jail administrators throughout the country, she has now pulled more than 100 children out of prison and cares for about 50 children at the ECDC at any given time.

The ECDC offers a daycare center for younger children and a residential “Butterfly Home” for older children, who enroll in a local private school and receive food and medical care. Basnet helps children maintain relationships with their parents and works to reunite families at the end of a parent’s prison sentence.

“Her heart is just in the right place,” Morgan said of Basnet, whom the children lovingly call “Mamu,” which means “Mommy” in Nepalese. “You just feel like she can do anything. You feel like she’s your mother.”

Morgan, who lives in Charlotte, N.C., with his wife and four children, met Basnet in April 2012 at a dinner party for International House, an organization that supports the city’s international community. Basnet sat quietly in a corner of the room when Morgan’s wife first approached her, and she immediately connected with their timid 18-month-old son. The three of them talked about Basnet’s work at the ECDC.

“I was just mesmerized,” Morgan recalled, noting that the ECDC currently doesn’t have enough space to house every imprisoned child in need. “There are kids waiting, hoping that they can get picked up next so they can leave. I said to my wife, ‘I have to do this. I have to do this story.’”

Morgan shared the idea with Oscar-winning actress Susan Sarandon and filmmaker Morgan Spurlock, who is known for directing and starring in the 2004 documentary “Super Size Me.” Sarandon and Spurlock had advised Morgan throughout production of “These Storied Streets,” his 2013 debut documentary about homelessness in the U.S. Both insisted that Morgan pursue the “Waiting for Mamu” story, and they collaborated as co-executive producers of the film.

“One of the most beautiful and hopeful stories I’ve ever seen,” Spurlock said by email. “From the moment Thomas first told me about the project, I knew I had to do anything I could to help him get it made.”

Morgan arrived in Nepal with five other crewmembers just four months after meeting Basnet, ready to shoot the documentary. The team filmed the project over a five-week period with a budget of less than $100,000. They worked in association with Shine Global Inc., a nonprofit video production company that creates social change for children through film.

“The story is really told through the eyes of these children whose lives she’s saved,” Morgan said. “You see firsthand through these kids and through Pushpa this amazing story of family that is unbelievably strong, and it’s unquestionable that it is a family. She cares for these kids like they’re her own kids, and it breaks her heart when one leaves.”

“She had great things to say about it, and it always stuck with me,” said Morgan, who is an Owosso, Mich., native and Central Michigan University graduate. “It works perfect, and it’s great to come home.”

“This is a film that Michael [Moore] saw and he really loved it,” she said. “It’s a really special film. Some of them are just so important that everyone should have access to them.”

Morgan returns to Traverse City for the world premiere of “Waiting for Mamu” after giving a TEDxTraverseCity talk about serving others for social change in May 2013.

Basnet’s story resonates on a larger scale as a metaphor for anyone who is imprisoned by circumstances they have no control over, including poverty and lack of education, Morgan said.

Morgan and Basnet will discuss “Waiting for Mamu” during an extended Q&A session that will follow the complimentary screening of the documentary at Traverse City’s Bijou by the Bay movie theater.

Traverse Magazine interviewed 2012 CNN Hero of the Year Pushpa Basnet before her arrival in Traverse City for the “Waiting for Mamu” world premiere. Check out the story here.