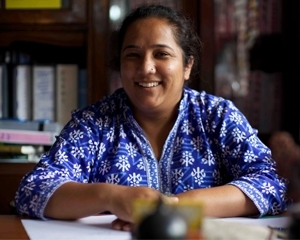 CNN Hero of the Year Pushpa Basnet, a Nepalese social worker who is featured in the Traverse City Film Festival 2013 documentary “Waiting for Mamu,” rescues children who are living with their parents in prison. Basnet, 29, will attend the film’s world premiere on July 31.

“Waiting for Mamu” tells the story of Basnet, who was 21 when she established a childcare center for Nepalese children of incarcerated parents. In Nepal, if a parent is sentenced to prison and there is no legal guardian available, the child must either live in prison with the parent until the age of 18 or survive alone on the streets. Filmmaker Thomas Morgan, a 45-year-old Owosso, Mich., native and Central Michigan University graduate, directed the documentary. Oscar-winning actress Susan Sarandon and Morgan Spurlock, who is known for directing and starring in the documentary “Super Size Me,” collaborated as co-executive producers of the film.

Basnet founded the Early Childhood Development Center in Kathmandu, Nepal in 2005. The ECDC currently cares for about 50 children at any given time. A residential center called the “Butterfly Home” houses older children, who enroll in a local private school and receive food and medical care. A daycare center serves children who are under five years old and deemed too young to sleep apart from their parents.

Basnet works with 18 prisons throughout Nepal and has rescued more than 100 children from living behind bars, she said. The ECDC pays rent for Butterfly Home housing, and landlords have forced the staff to move the children five times throughout the past seven years upon discovering the ECDC serves children of prisoners, Morgan said.

Although directors from other countries have filmed documentaries about the ECDC, Morgan is the first to continue helping the organization postproduction, Basnet said.

“We get lots of people who come and who just go away, they never come back,” Basnet said of other filmmakers. “With Thomas it’s not just a documentary, it’s the attachment with the children also. I really feel special about him coming to Kathmandu.”

Morgan, a father of four, insisted his work isn’t complete until the ECDC can fund construction of a permanent residential center.

“It gives these kids stability, and it allows her to take a lot more kids out of prison,” Morgan said of building the new Butterfly Home, which will house 70 children. “For me, that’s what the power of film is. People see it, they gravitate to it, and finally it’s not just a news story on the radio. We hope that we continue to talk about and create change for Pushpa until her house is built.”

Morgan met Basnet in April 2012 and filmed “Waiting for Mamu” before she was named 2012 CNN Hero of the Year. The recognition made it easier for the ECDC to work with the Nepalese government, she said.

“Things have changed in my life, and I think definitely in my children’s lives,” Basnet, who was one of 45,000 nominees, said of winning the award. “When the children used to walk in the road people used to say, ‘Look at those children whose parents are criminals.’ Now it’s like, ‘Look at these children whose mom has won the CNN award.’ So the way of perspective has totally changed toward my children also. Even my children, they feel that if they work hard they will have the same success and same opportunities that I have had.”

Although Basnet received $300,000 with the 2012 CNN Hero of the Year award and used it to purchase land for the Butterfly Home, the ECDC still needs an additional $500,000 to fully fund construction, Basnet said.

Traverse City’s Utopia Foundation, a nonprofit that supports local and international community initiatives for children, will help the ECDC’s fundraising efforts by hosting an “Evening of Impact” with Basnet and Morgan following the “Waiting for Mamu” world premiere. The Utopia Foundation connected with Morgan when he gave a TEDxTraverseCity talk in May 2013 and introduced the Traverse City community to Basnet’s story, said Dorothy Sirrine, executive director of the Utopia Foundation.

“I’ve talked to a lot of people that say basically the emotion that he showed with his talk really resonated,” Sirrine said. “It’s just a really nice long-term opportunity to help because you get the sense [Basnet] is going to continue doing this work.”

Although Basnet travels every month and will be away from the ECDC during the “Waiting for Mamu” world premiere, she said she keeps in touch with the children every day.

“I make sure I Skype with them, talk to them and say ‘Don’t do naughty things,’” Basnet said. “It’s true that our country has said that their parents have done crimes, but I would feel that these children have not done anything, so we need to see them as special children. If we give them an opportunity, they will have definitely a bright future.”

Learn more about the making of the Traverse City Film Festival 2013 documentary “Waiting for Mamu” here.

Photo(s) by Photo courtesy of "Waiting for Mamu"