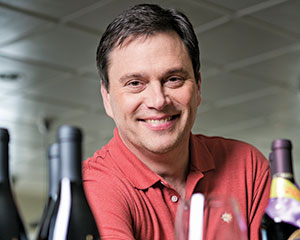 Red wine-grapes tend to crave heat, so you can understand why cold-hardy Northern Michigan growers approached them with caution. So cautiously, in fact, that by the mid-90s, red wines were still little more than a footnote in our otherwise burgeoning (white) wine scene. Lately, however, anyone who has hit the wine trail knows the red scene is changing. In search of a status update, we check in with Lee Lutes, vintner at Black Star Farms.

First, remind us of what was going on with reds here in the mid-90s.

When I came back from working vineyards in Italy in 1993, there wasn’t much happening with reds here—some hybrid varieties and a few plantings of vinifera, but not really anything people were fully committed to.

What drew your focus on reds?

Everything I had worked on in Italy was red, so I was interested in that here. I sought out Warren Raftshol who had a little merlot, a little cabernet sauvignon, and we created Raftshol Red, one of my earliest attempts at a serious dry red wine here.

When did our red grape planting start to take off?

In the latter part of the ‘90s we saw more interest, more planting of red varieties—Cabernet Franc, some gamay, more merlot, some pinot noir.

And those early experiments are doing what now?

Now what you have are vineyards old enough—10 years, 15 years- to where the vines have achieved a level of balance that allows them to produce better quality fruit. When vines are young, they’re like adolescent kids, a little gangly, little out of sorts, unpredictable year to year, but now ours are stabilizing. Plus roots are reaching deeper into the soil, like 25, 30 feet, and that is adding to the complexity of the fruit, the mineral components.

Which reds are likely to be the stars on the stage here?

We’ll never be making cabernet sau-vignon and big syrahs and Rhône; it’s just not hot enough here. But we are making serious red wines. Cabernet Franc, pinot noir, blaufrankisch- they are showing themselves to have greater complexity and greater nuance in these cooler climates. Our pinot noir just took a double gold medal in an international wine competition in New York.

What’s the next big thing for our red scene?

We have a significant experimental plot at the Northwest Michigan Horticultural Station that Paulo Sabatini, a viticulture professor at Michigan State, is running. He comes from Italy, and that country obviously has a tremendous red wine influence.

Any early standouts to discuss?

Two varieties- Teraldego and LaGrein- both northern Italian varieties. They are good dark reds with great fruit profiles, a broad range of flavors, and the wines react well in a barrel. They age well. Also, there are some varieties from Minnesota, which has a significant cool climate breeding program. One in particular, the Marquette variety, is showing good promise. Lemberger is another variety that is kind of hot. It makes really dark deep red wines, is well fruited with hints of black pepper, not too much unlike syrah. Lemberger is pretty significant in Austria.

This article was featured in the June 2013 issue of Traverse Magazine— subscribe today!
X
X