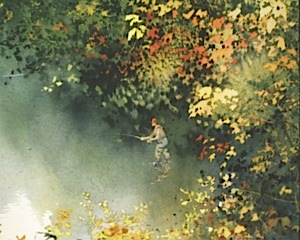 In the mid-1900s, Roland Roycroft earned his living in the illustration houses of Chicago, creating art for the likes of Saturday Evening Post, Better Homes & Gardens, Life and Look magazines and covers for 11 reissues of Wizard of Oz books. But in the 1970s, Roycroft developed allergies to the chemicals of his craft, quit his job and moved north to Benzie County, there hiring on as a school bus driver.

But for Roycroft, quitting art was not an option. He picked up the non-toxic medium of watercolor and set about mastering it, earning renown for his ability to convey an ethereal sense of light, a difficult achievement with watercolor. And word got around. The Fox Animation Studios hired him to teach his technique to the team creating the 1997 feature film Anastasia.

Millar has summered near Frankfort her entire life and recalls being a teen and seeing Roycroft selling his paintings for $75 and $100 at the Frankfort Art Show. “He used to trade paintings for things at the hardware store,” Millar says. Today Roycroft’s more sought-after works fetch $20,000. Millar is assembling the show as a capstone project for her master’s degree program at Savannah School of Art and Design. Expect to see several paintings from private collections that have not been displayed previously in public.

Click here for more info on the arts in Northern Michigan!