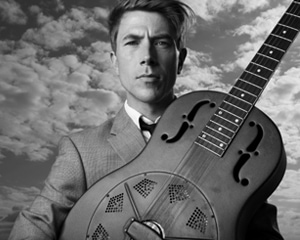 Northern Michigan native, Luke Winslow-King is originally from the Up North town of Cadillac. Winslow-King is returning to his roots this month with shows in Traverse City, Manistee, Bellaire, and Petoskey.

Winslow-King’s style is a unique blend of various styles of music, all brought together with heart and a whole lot of talent. His musical interests are rooted in smooth traditional jazz and pre-war blues; however, his current work takes those two styles and mixes in key elements from genres such as delta-folk music, rock-and-roll, ragtime, and even some classical composition, giving his music a vintage feel that cannot be replicated.

By age 14, Winslow-King had already begun performing shows with his guitar at festivals and events all through his high school career. He continued to master his guitar skills at the Interlochen Arts Academy, where he majored in Jazz Guitar and received his diploma in 2001.

By chance, Winslow-King moved to New Orleans at the young age of 19. There he has had many opportunities to collaborate with local musicians and continue his education at the University of New Orleans studying music and composition, which led him to study classical music at St. Charles University in Prague for one summer.

Luke Winslow-King currently performs solo and with his band, the perfect addition to his already stellar sound. His roots to Northern Michigan in both Cadillac and Interlochen have been influential in Winslow-King’s musical career, and Michigan looks forward to welcoming him back for shows this month.

Learn more about Luke Winslow-King and check out his music here. Then be sure to catch one of his Up North performances starting tonight at Coyote Crossings in Cadillac. He will then be performing Saturday, Thursday, July 11, in Manistee at Roots on the River; Friday, July 12, in Bellaire at Shorts Brewery; and lastly, July 13 and 14, in Petoskey & Bliss at Bliss Fest. For a complete list of performances in Michigan and nationwide, check out his full tour schedule here.

For tickets to shows, festivals, and tours in Northern Michigan check out MyNorthTickets.com!