Northern Michigan Events: It's Time for the 105th Chicago to Mackinac Race! 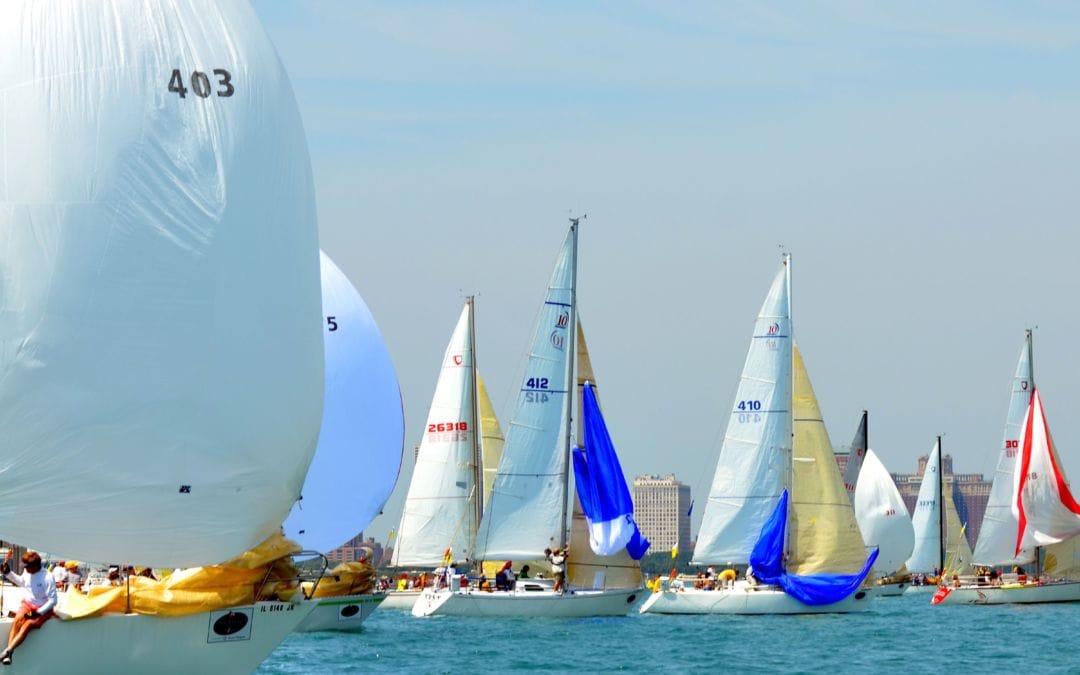 Northern Michigan Events: Ready, set, go! It's time for the 105th Chicago Yacht Club Race to Mackinac Island! For over a century, sailors have been embarking on the famed Lake Michigan route from Chicago to Mackinac Island and this summer is no different. With over 300 boats and over 3,000 competitors, the "Mac" is a freshwater sailing tradition like no other. Before you see the boats cruising along our Northern Michigan coast, we've got you covered so you know starboard from port and just what exactly an "island goat" is.

How long is the race?

333 statute miles (289.4 nautical miles) from Chicago, starting just off Navy Pier, and finishing between the lighthouse on Round Island and the race committee trailer on Mackinac Island, Michigan. It is the oldest annual freshwater distance race in the world.

When was the first Race to Mackinac?

The first Mac Race was held in 1898 as an informal race of 5 boats. Vanenna won in 51 hours.? The second Mac didn’t come until 1904 and then intermittently until after World War I. Every year since 1921 has seen the running of the Race to Mackinac. 2013 marks the 105th running.

How many boats participate?

What do the winners receive?

The Chicago Yacht Club Race to Mackinac is an amateur event, so no prize money is awarded.?The Section winners receive a plaque, a flag and “bragging rights.” The overall winners have their names engraved on the permanent trophies that are displayed at Chicago Yacht Club. Our presenting sponsor, VeuveClicquot,presents etched bottles of champagne for each section and division winner.

What is the record for the fastest race?

Pyewacket, a Reichel Pugh 75, owned and skippered by Roy Disney, set the monohull record in 2002 with an elapsed time of 23 hours 30 minutes and 34 seconds. This broke the 14-year record of 25 hours 50 minutes and 44 seconds established by the yacht Pied Piper, a Santa Cruz 70 owned and skippered by Dick Jennings of Evanston, Ill. For multihulls, the record of 18 hours 50 minutes and? 32 seconds was set in 1998 by Steve Fossett on Stars and Stripes, the catamaran previously sailed by Dennis Conner in the America’s Cup.

The race usually takes most of the fleet between 40 and 60 hours to finish.

How can big boats and small boats race against each other?

Boats are handicapped by a series of mathematical rating systems which predict how fast they should be capable of sailing under a variety of conditions. Applying these ratings to each boat’s elapsed time on the racecourse determines which boat sailed the best relative to their rating, and therefore determines the winner. This allows the entire fleet to compete against each other.

How does the race start?

The fleet is divided into groups or sections based on rating. Each section is comprised of 8-30 boats of similar ratings. Each section starts the race at a specific time. The Cruising Division will begin at 3 p.m. on Friday, July 12th, and the rest of the fleet starts at 11 a.m. on July 13th and continues every 10 minutes until the last section has started (approximately 3 p.m.). A cannon is fired at the specific start time for each section. The objective is to cross the starting line under full sail immediately as the starting gun for your section is fired. Boats crossing the starting line too early are required to turn back and restart — a significant penalty.

What do the boats do at night?

The boats will race around the clock until they reach Mackinac Island; so sailing at night is required. Running lights and lighted instruments are required for navigation and safety.? Additionally, the crew will work in shifts, or “watches,” so that there is time for sleeping, eating, etc.

What do the boats do during storms?

Storms are common on Lake Michigan and the boats are required to be equipped to handle them. Generally the procedure calls for shortening sail area (called ‘reefing’) and making adjustments to minimize the chance of damage to the boat, equipment, and crew. The boats will continue to race during storms. Each crew member is equipped with a life jacket and safety harness.

2011: A strong storm hit the fleet in the northern part of the Lake, causing damage to many boats and tragically resulting in the death of two sailors. These were the first racing-related deaths in the history of the race

1970: More than half of the 167 yachts took refuge from northerly winds gusting past 60 mph. Only 79 starters finished.

How does Chicago Yacht Club address safety for its competitors?

The Chicago Yacht Club prides itself on organizing a safe, fun race. It works closely with the U.S. Coast Guard and many other support groups to actively educate its sailors on safety. We strongly recommend that at least 30% of each crew have recently attended a US Sailing Safety at Sea Seminar, and the Race to Mackinac committee distributes an e-news update called Thursday Safety Series to all skippers and crew, as part of its ongoing education efforts. A culture of safety permeates every decision taken by the organizing authority.

What is an Island Goat?

Racers who compete in 25 Chicago to Mackinac races are invited to join the exclusive “Island Goats Sailing Society” (IGSS). Originally named for their appearance, aroma, and behavior upon reaching Mackinac Island, these salty veterans represent an elite chapter in the heritage of the Race to Mackinac.

The IGSS was established by Hobart “Red” Olson in 1959, and 2009 marked the 50th anniversary for the IGSS. Island goats have raced at least 8,325 miles from Chicago to Mackinac Island. For a list of all goats, go to www.islandgoats.org.

How can spectators find out where the boats are during the race?

Spectators can log on to www.cycracetomackinac.com during the race and click on the ?“Race Tracking” link to watch real time GPS positioning of all the racing boats. Follow us on Twitter @RacetoMackinac and on Facebook at www.facebook.com/ChicagoYCRaceToMackinac. Racers will be tweeting from the lake using the hash tag #CYCRTM. Additionally, results will be posted and updated on the Web site as the racers finish.

For more information visit the race website at https://www.cycracetomackinac.com/.

Aft or Stern – The back of a ship. If something is located aft or stern, it is at the back of the sailboat.

Bow – The front of the ship, opposite from aft or stern.

Starboard – Starboard is always the right-hand side of the boat when you are facing the bow.

Leeward – Also known as lee, leeward is the direction opposite to the way the wind is currently blowing (windward). If the wind is blowing on your back, you are looking leeward.

Windward – The direction in which the wind is currently blowing. Sailboats tend to move with the wind, making the windward direction an important sailing term to know. If you face the wind, you are looking windward.

Boom – The boom is the horizontal pole which extends from the bottom of the mast. Adjusting the boom in the direction of the wind is how the sailboat is able to harness wind power in order to move forward.

Rudder – Located beneath the boat, the rudder is a flat piece of wood, fiberglass, or metal that is used to steer the ship. Larger sailboats control the rudder via a wheel, while smaller sailboats will have a steering mechanism, a tiller, directly aft (pop quiz, where is aft?)

Jibing – Jibing refers to turning the stern of the boat through the wind so that the wind changes from one side of the boat to the other side. Jibing is a less common technique than tacking, since it involves turning a boat with the wind.

We found all of these fun sailing terms at Discover Boating

For a complete guide to the 105th Chicago Yacht Club Race to Mackinac, click here!