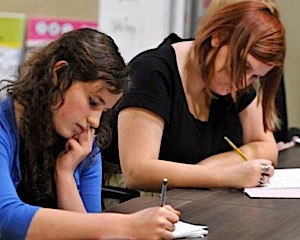 The National Writers Series is offering a variety of summer writing workshops in conjunction with theFront Street Writers Program for students from third grade through high school. The week-long programs offer a variety of choices including non-fiction, digital storytelling, and mystery writing as well as a class for advanced writers. Most workshops will take place at the new Front Street Writers Studio located at 123 W. Front St. “Terrfying Tales,” a workshop for middle school students, will meet on the lawn at Building 50. These students will explore the hospital grounds and immerse themselves in the history and lore of the former asylum to create a terrifying tale.

“Front Street Writers gets even better and more interesting with these summer workshops,” said Doug Stanton urging, “They are the kind of classes I wished for when I was just starting out –take advantage of these one-of-a-kind writing experiences.”

Most workshops are $100 for the week-long course. A limited number of scholarships are available. Individuals interested in learning more about scholarships should contact Kerrey Woughter at woughterke@ tcaps.net.

For more information about classes and instructors or to register for workshops:https://nationalwritersseries.org/student/workshops/.

Creativity is contagious, so we will work together to hone unique writing voices in a variety of situations. In this exploration of voice, we will imitate the masters and generate a plethora of our own writing in order to find patterns, experiment, share, learn and celebrate our successes.

It may be true that there are no new stories, but there are countless innovative ways to tell the same old stories. Can you imagine a short story written entirely as an email exchange? Or a choose-your-own-adventure love story where the author supplies the reader with several possible endings? What about a narrative that moves through different rooms of a house in order to tell a family drama? Tired of the traditional conflict-crisis-resolution pattern most fiction follows, contemporary writers often seek new forms to freshen up their narratives, and we’ll follow suit. Students should come to the first class with a draft of a short story in progress (3-10 pages), and be prepared for an exciting week of inspiring readings, writing exercises, formal experimentations, and peer workshops. This class is recommended for students entering grades 8 – 12 who love to write and want to take their fiction to the next level.

July 22-26, 1:30-3:30pm at Front Street Writers Studio, 123 W. Front Street Do you love to write but don't quite know where to start? Once you've written something, what do you do then? Is it a story? Could it be a poem? How do you turn it into something that you will keep forever, or perhaps share? Join us this week as we explore new techniques in writing.

August 5-9, 1:30-3:30pm at Front Street Writers Studio, 123 W. Front Street What do you believe? Can you name those ideas and moments that have shaped you? Can you explain their importance to others? Can you make them feel what you feel? That will be your writing challenge this week as you explore what influences you most and write about it! Create a non-fiction script that will inspire a digital story telling experience. No previous technology skills are necessary, but if you have a computer and/or a camera, bring it Tuesday!

Terrifying Tales (6th, 7th & 8th grade) $100 August 12 – 16, 1:30-3:30pm – Meet on the lawn out Building 50 in front of Cuppa Joe Whispering winds scatter leaves over the Traverse City State Hospital grounds. On an eerie night, spirits rise from their sleeping places. Even in the daylight a glimpse of a figure in a long abandoned window sends a chill down your spine. Explore the hospital grounds and immerse yourself in the history and lore of the former asylum to create your own terrifying tale. Wear your walking shoes and bring a notebook and pencil.

Mighty Flavor* (5th & 6th grade) $100
July 22-26, 11:15am-1:15pm at Front Street Writers Studio, 123 W. Front Street Build upon your writing palette while tantalizing your palate! You’ll be tasting treats while enhancing your writing skills during this 5 day workshop. Activities will include hands on experiences to strengthen sensory details. Each day we will sample goodies from local restaurants or shops and craft critiques. Working together, we will polish and publish our favorites. Who ever said kids only want hot dogs and cheese pizza?

*This session is not appropriate for writers with food allergies.

Spinners and Sleuths (5th & 6th grade) $100
August 5-9, 11:15 am -1:15 Instructor: Nicole Caldwell You’ll be tale spinning and mystery solving during this writing adventure! Explore details and description through games, improvisation, and collaboration to warm up your writing skills. In small groups you will travel to different scenes. As spinners, you’ll weave stories around that scene. As sleuths, you’ll work together to investigate the stories, piecing together samples of writing, in order to find the mystery location.

Create, expand and become characters from stories told and untold. Through improvisation, interactive games, and on site experiences, you will redefine characters, setting and plot. We will step into our favorite scenes and interact with characters, stretching our imaginations beyond the story told. We will write outside of our favorite stories, to give depth to places and characters that have a story of their own. A collage will showcase the multiple characters through sample writings

Create a creature! Whether the creature is spooky or not is up to you! Of course, every good (or-not-so-good) creature needs a place to belong and a reason to exist. You will not only create a world for your very own creature to exist in, you’ll be the voice to share the tale. We’ll venture into natural surroundings to observe sensory details, in order to draw our audience into an experience they have yet to imagine.

August 12 – 16, 9-11am at Traverse City Central High School library, 1150 Milliken Drive Dungeons or dragons? Princesses or knights? Motes or towers? (Hey, why not all?) Create your own castle and chronicle the story of the creatures and community that call your palace home. Look to famous legends of sword play and dragon slaying to inspire your own high adventure.

When Doug Stanton was a young student and aspiring author, a local Traverse City, Michigan, benefactor offered to help fund his final year at Interlochen Arts Academy, where he was a creative writing and theater major. Inspired by that experience, and motivated by a belief that “we can pitch in and, inexpensively, make our public schools richer places,” in 2009 the National Writers Series and Traverse City Area Public Schools began to talk about how they could partner to offer such a program.

On September 5, 2012 –the National Writers Series and Traverse City Public Schools launched Front Street Writers, a for-credit, tuition-free, and rigorous creative writing program for public high school students. Led by publishing writers-in-residence, enthusiastic Traverse City Area Public School teachers, and NWS's nationally renowned guest authors who conduct master classes with the students, the program treats the young writer as a serious artist and as a working professional. This is done with the belief that the creation of literature is an important, stimulating way of life and a way to forge a rewarding livelihood.

The Front Street Writers studio is located at 123 W. Front Street in downtown Traverse City, Michigan, in a nearly 4,000 square foot creative learning studio. Because of a generous donation from Steelcase and Jonathan and Marissa Wege, the stylish, state of the art building is equipped to accommodate classroom-style teaching, in-the-round workshops, formal readings, and interactive story editing.

The Writers Series of Traverse City is a nonprofit organization that relies on community support for sustainability. All contributions are 100% tax deductible. Donations can be made online at www.nationalwritersseries.org, by mail: NWS, 123 W. Front Street, Traverse City, MI 49684, or in person at any NWS event.

The National Writers Series/Writers Series of Traverse City is, in part, made possible by our sponsors, including our sustaining sponsors FIM Group, Cherry Capital Airport and Traverse City Eye. To become a sponsor or to gain additional information contact: Chuck O'Connor via at chuck@emgconsult.com or 231-590-2521.