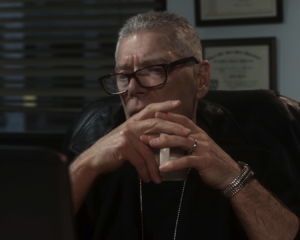 The Girl on the Train, a film that Leland-based filmmakers, Rebecca Reynolds and Jim Carpenter of 8180 Films, helped create will be shown at the 2013 Traverse City Film Festival. Reynolds and Carpenters were producers on the film and worked with fellow Lelanders, executive producer Ross Satterwhite and composer Alexander Janko on this psychological thriller. Here, the husband and wife pair discuss their experiences creating the film, the growth of the Traverse City Film Festival and more.

Can you tell me a bit about the plot of The Girl on the Train?

Rebecca Reynolds: I will tell you a little bit only because, like comedy, you don’t want to reveal everything. It’s about a documentary filmmaker (Henry Ian Cusack) who is going through his regular life. He boards this train to head north because he is doing this project about an older couple who survived WWII as children. On the way up there he encounters this mysterious woman (Nicki Aycox) and she just makes such an impression on him that he sort of becomes a bit fixated on finding her again, knowing her.

But all he has is her name, which she wrote on his palm while they were on the train. So he’s going about his normal documentary film world, but he’s thinking about this woman. And all of a sudden she appears.

Jim Carpenter: I also wanted to throw in that we think this is a really smart script. It’s really brilliant that way (Larry Brand, the writer and director of the film) intricately weaves these different stories.

What drew you to this project?

Rebecca Reynolds: We were getting ready to do our next project and there were changes in the Michigan Film Incentives (legislation that gives tax breaks to film and media companies that film projects in the state of Michigan), so we decided that we would switch to this script by Larry Brand. So we ended up not shooting our third film in Michigan, but shooting it in New York.

What was your shooting experience in New York like?

Rebecca Reynolds: We shot in Manhattan. Our production offices were down in the Wall Street area. Since the crash a couple of years ago, there were a lot of available offices. So we got a good deal on offices, which helped because we are a low budget film company. We actually ended up using our giant production offices for three sets, we build them right there in the office, and some green screen filming.

We rented an abandoned Catholic school called Mary Help of Christians. It has an old school in it and a rectory. Because there was an active church attached to it, but the rectory had been abandoned. We used that for an after-hours club set and abandoned tenement room set. We shot in the Carl Schurz Park on the Upper East Side. And it’s funny, Jim and I watched the recent Tom Cruise movie, Reacher, and they shot there too. I was like, “Oh, I know those benches.”

New York is very film friendly. For a $300 blanket fee, you can film anywhere in the city if you don’t try to block traffic. Because it’s The Girl on the Train, we actually shot in Grand Central Terminal and on a train north out of the city to Poughkeepsie, New York. So we were up and we were back. That was very exciting to shoot in Grand Central Terminal and to shoot on a train going north on the Hudson River.

What was your schedule for shooting the film?

Rebecca Reynolds: We were in New York a couple of months, but we shot the entire film in 17 days. Which is a very tight schedule, but that’s what you do on an indie film. Actually, our original schedule was 14 days but the train they booked us on had doors that wouldn’t open at a certain point so they gave us an extra half-day. Then one night we were going to shoot on top of a hotel in Queens, to get the view back west to Manhattan but there was a cloud cover, so we shot there another night. So it ended up being 17 days but anyone will tell you that’s a grueling schedule.

How long have you been involved with this project?

Jim Carpenter: Late 2011, we actually did the filming in New York in April and the beginning of May 2012. Along with getting our investors, we have to go through all the hoops of the different unions, the Writers Guild, the Directors Guild and the Screen Actors Guild. This was a union film.

Rebecca Reynolds: This was a union film and as Jim said that requires other hoops. We spent almost a year on post production, which is getting the sound mixed, editing the film, getting the score done and digital color correction. The less money you have in those processes, the more time it takes. Because if someone is cutting you a deal to sound mix your project and they get a bigger more lucrative project, you might be bumped in the queue, which is totally understandable and is just the way of the world.

Jim Carpenter: You spend a fair amount of time getting your crew together. It is not as straightforward as it might sound. You get a producer you are good with and then you line up different people in all the different trades who will be working with you. And that’s interview and meetings and figuring out who will be the best mix. We were very fortunate to have a wonderful crew on the ground in New York, most of whom we’ve never met before.

Was anyone from the Northern Michigan part of the cast or crew?

Rebecca Reynolds: We have a couple of people from this area that ended up working on the film. One of them is Alexandra Zenn. She worked as our production office assistant and she did out extra castings for us. Drew McConnell, who is originally from Leland, also was an extra in the film and he stood in for the actors when they were being lit.

How did The Girl on the Train become a part of the Traverse City Film Festival?

Rebecca Reynolds: The Traverse City Film Festival is invitation only. They do have a mechanism on their website for getting your film to them. It’s not like submitting to a regular film festival where you submit applications. Larry, Jim and I have all worked in and around the Traverse City Film Festival since the beginning. I have been a juror, a moderator, a panelist. A highlight for me was on the 50th anniversary of To Kill a Mockingbird I got to introduce the film and conduct the Q&A with the young star of the film, Mary Badham, who played Scout.

Our first film, Christina premiered at the State at 2010. Michael Moore wanted it to be the week before the festival. It worked out very well for us. We had two back-to-back sold out screenings. And then he invited our comedy documentary, The Coexist Comedy Tour, to be in the February 2013 Winter Comedy Arts Festival.

So when this film was ready, which wasn’t until the 1st of May, we got it to them and we were thrilled to be invited. It’s a great thing for us because we love the festival and we are honored to be part of our hometown festival, which has this huge reputation now.

Jim Carpenter: I think it’s a huge influence. Michael and his team have just been absolutely amazing with everything they have done. It extends to every facet of the arts industry and even further than that — look at the restaurant world downtown. The whole downtown area, Front Street, has Michael to thank for what’s been happening there.

Rebecca Reynolds: The centerpiece film in this year’s festival is Elaine Stritch: Shoot Me. It’s by a first time director, Chiemi Karasawa. I do staff writing for this online film magazine called The Independent and I was assigned to write about Chiemi as part of a “10 To Watch in 2013” article. So in May, I was interviewing her over the phone and her film was in the Tribecca Film Festival, which everyone has heard of, in New York City. And she said “Will you be able to come see the film?” and I said, “Oh, I would love to but I’m in Northwest Michigan.” She asked, “Are you near Traverse City?.” And I said, “Yes, are you familiar with Traverse City?.” She replied, “No, but I would really like to get film in that festival.”

Now, Jim and I have both lived and worked in New York and LA and we used to have to do the whole explanation, pretty much explain that it wasn’t Minnesota or Wisconsin and then do the whole hand thing. And now her film is the centerpiece film. It’s amazing how much it has grown in the past nine years.

The Girl on the Train will be shown Wednesday July 31 at 9:00 a.m. at The Old Town Playhouse. Tickets for the film sold out on the first day of sales, during the “Friends of the Festival” ticket sales period. Tickets may be available by stand-by line only on the morning of the show. Reynolds hopes that a second showing may open up during the Festival but if not Reynolds and Carpenter are currently working on distribution of their film. They hope that one day, The Girl on the Train will be in a “theatre near you."