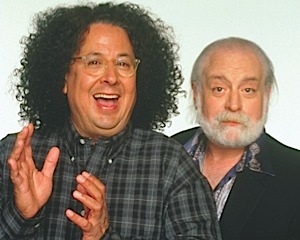 Northern Michigan Events: Songs like “Young Girl,” “This Diamond Ring,” “Easy to Be Hard,” and “Kicks” continue to find favor with audiences. That’s especially true when they are performed by the singers who made them popular: Gary Puckett (& The Union Gap), Gary Lewis (& the Playboys), Chuck Negron (Three Dog Night), and Mark Lindsay (Paul Revere and the Raiders).

Those icons will appear Aug. 30 at Little River Casino with headliners Mark Volman and Howard Kaylan, a.k.a the Turtles, a.k.a Flo and Eddie. The twosome has headlined the Happy Together tour, named for the Turtles’ biggest hit, for the last four years. Volman says the performers are all friends who share a common history and a common desire. “Last night I saw the Monkees show. My daughters went to school with Micky and Davy’s daughters. We all came from or moved to California and all got our dream. And we all sort of ran away from our dream,” he said with a laugh. “How fortunate that we can do what as kids we all wanted to do. It’s remarkable how it connects with the audience.”

Volman says that connection exists for a variety of reasons. “The songs still resonate. It was an era we won’t see again, a coming together of elements. There was a lot happening in the country—the Kennedys, Viet Nam, Woodstock.” The music reminds people of the era, but the songs are also great music, and are unlike anything being recorded today. “Gary Lewis is fun, not pompous. Mark Lindsay made these great rock songs. Gary Puckett, who closes the first half of the show, is the consummate balladeer. “Chuck Negron and those Three Dog Night songs— ‘Eli’s Comin’,’ ‘Celebrate,’ ‘One’ —those songs would work in any theater. The tour succeeds because it fills a void in the marketplace,” he said.

And don’t forget those hits by the Turtles: “Elenore,” “It Ain’t Me Babe,” “You Baby,” “She’d Rather Be With Me,” and, of course, “Happy Together.” While Volman had carved out an illustrious career in rock music, first with the Turtles, then with Frank Zappa, and then with Kaylan as Flo and Eddie, he wasn’t satisfied with that. At the age of 45 he went back to school in 1992, and graduated Magna cum Laude from Loyola Marymount University with a B.A. In 1997. Not only that, he was class valedictorian, and gave a speech in which he led his fellow graduates in a chorus of “Happy Together.” Two years later he earned a Master’s from Loyola in Fine Arts with an emphasis in screenwriting.

He went on to teach Music Business & Industry courses in the Communications and Fine Arts department at Loyola. He is currently an Associate Professor and Coordinator of the Entertainment Industry Studies Program at Belmont University in the Mike Curb College of Entertainment and Music Business. That’s right, he’s now Professor Volman, and he also conducts seminars about the music industry for various academic institutions and offers consulting on music business and entertainment through the website Ask Professor Flo.

In the academic off-season he still tours with his musical partner Howard Kaylan and various artists from the 60s, such as old pal Puckett (“Gary, Howard and I have been friends for 45 years”), the Association, the Grass Roots, Micky Dolenz and others. Volman says the two still enjoy the performances, but the rigors of the road make the days long. “Getting paid for what we do sometimes seems like a crime, (but) with 16 shows in 21 days, there’s not a lot of time off.” Then he suggested kiddingly, “Maybe we don’t get paid for the shows, but we get paid for the travel.”

Volman notes that the format of the shows provides for a seamless transition from one performer to another. Their handpicked house band backs each of the singers, eliminating any need for intermissions to reset the stage between acts. “You have to have band members sensitive to the era,” he said, “musicians who love the music of that time. The audiences have seen a lot of live music, so we put together a show that lives up to (what they expect). “We’ve gone from 16 shows to 23 to 43 to about 60 this year. Promoters are excited about bringing the show in. People are already talking about next year.”

While the tour continues to grow, Volman says the state of the industry these days assures there won’t be any new recordings in his and Kaylan’s future. “We have no plans to do a recording. The people who sell records are all 18 to 32—Justin Timberlake, Selena Gomez. Nobody’s buying Greg Allman or Canned Heat. Hall and Oates can’t get a record deal. There’s no radio, no record business. For me to make a record, who the hell’s gonna buy it?”

While the show is dedicated to the pop hits, Volman says they put to use the lessons they learned from their time with Frank Zappa. That’s where they were first billed as Flo and Eddie, as they were legally prevented from using either their own names or the Turtles moniker. “Frank was highly professional,” he said. “Night after night we’d try to reach the highest musical level.

“We’ve tried to make our show something as good each night as the night before, the best possible show. People are spending their money—we better be good.”